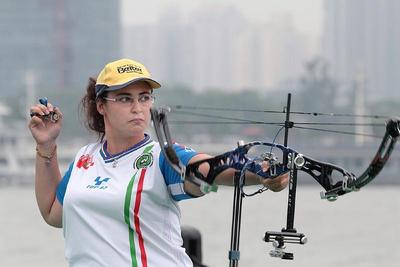 Lausanne – April 05, 2012: The Chinese town of Shanghai will host the Archery World Cup stage 1 in a few days, from 10-15 April 2012. The participation is very high with close to 330 archers expected on the field. Shanghai will host the Archery World Cup for the fifth time since 2006. It is the first time that the Chinese city hosts the first stage of this major archery event. The Archery World Cup comprises four stages that will allow the top 7 athletes per category to qualify for the Final in Tokyo. They will be joined by one wild card from Japan. The other legs will take place in Antalya (TUR) and Ogden (USA). The best mixed teams of the season will also travel to Tokyo to challenge the host.

During the 2012 World Cup, individual recurve archers will shoot a 70-metre Round in qualifications and then matches of 5 sets of 3 arrows at 70 metres (Olympic Round). Individual compound archers will shoot the 50-metre Round in qualifications and then matches of 5 ends of 3 arrows with cumulative scoring at 50 metres (Compound Round). Teams and Mixed Teams will shoot respectively 4 ends of 6 and 4 arrows with cumulative scoring. Recurve teams will keep playing at 70 metres and Compound ones at 50 metres. The Longines Prize for Precision will be awarded this year to the two recurve athletes (one man, one woman) who shoot the most 10s during the World Cup.

While the World Cup is foremost an individual event, it will be particularly important this year for the teams as well. Only eight teams were able to secure an early berth for the Olympic Games at the World Championships in Turin last summer. All the other teams will try to earn spots at the continental qualifiers, or at the last stage of the 2012 World Cup, which will be the final occasion to earn Olympic qualification. With the level of archery rising in all parts of the world, the Olympic qualifications have become as challenging as ever and a good preparation during the upcoming World Cup stages will be key. To note, only recurve athletes compete in the Olympic Games and the British teams are qualified as hosts.

Let’s now have a look at the individual favourites for a place in the World Cup Final and at the teams that are the most likely to dominate the World Cup stages and to qualify to the Olympics.

On the team side, Korea remains the favourites. Their most dangerous contenders have been lately the USA, France and India, although the Indian team still needs to fully qualify for the Games. Also in the run for Olympic medals: Great Britain, Italy, Ukraine, Mexico, China, Chinese Taipei, Malaysia and Japan.

This year the World Cup stage 3 in Ogden will also serve as the last qualifying event to the London 20 Olympic Games. There will be three team spots and four individuals places up for grabs. The nations that have already qualified a full team for the Olympics are Korea, China, France, Italy, Great Britain, Mexico, Ukraine and the USA. For the remaining team quota, the battle promises to be really, really fierce! Among the countries that have secured one spot and could still qualify a three-member team to London, the favourites are Australia, Canada, Chinese Taipei, India, Mongolia, Japan, and Spain with Egypt and Iran as “long shots”. Usually strong teams such as Malaysia, Poland, Germany and Russia will be hoping to earn their first spot, or a team, as well.

On the team side, Korea is the powerhouse. Their main opponents have been China and Russia during the last years and since the Russian team is still very young, it could turn into a very serious threat. Countries like Italy, India, Great Britain, Denmark, Chinese Taipei, Ukraine, Mexico and the USA are definitely in the mix.

The teams already qualified to the London Olympics are China, Denmark, Great Britain, India, Italy, Korea, Russia, Chinese Taipei and Ukraine. Among the teams that have earned one spot so far, the favourites to qualify a full team are Belarus, France, Georgia, Japan, Poland, Mexico, Mongolia and the USA. The fans will also keep an eye on Germany, Turkey and Iran.

On the team side, while the compound will not fight for an Olympic qualification, they will certainly fight against the five-time defender at the world championships: the USA. In fact, the Americans won 6 out of the 9 team titles since compound made its debut at the World Championships in Jakarta (INA) in 1995. France won in Indonesia, followed by Hungary in 1997. Norway earned the title in 2001.

The current World Champion Albina LOGINOVA (RUS) will be hoping to recover the World Cup title that she had won in 2010 and lost in 2011. She will be challenged by the 2011 winner Erika ANSCHUTZ (USA), as well as Ivana BUDEN (CRO), Gladys WILLEMS (BEL), Linda OCHOA (MEX), and Jamie Van NATTA. Italians Marcella TONIOLI and Laura LONGO are also among the favourites, as well as the Iranians Parsamehr MAHTAB and Seyedeh HALIMIANAVVAL. Finally, Christie COLIN (USA), who came back from a break at the international level in 2011 to win the silver at the last World Cup Final, will also be among the contenders.

In this category, the USA has not been as dominant as on the men’s side, winning three world titles. The last few years the main rivalry has been between Russia and the USA, the former team won the world title in Ulsan 2009 and the latter in Turin 2011. France has two world titles as well, while Italy, Belgium and Chinese Taipei have one. In Shanghai, the other favorites will be France, Great Britain, Germany, India, Iran, Mexico and Sweden.