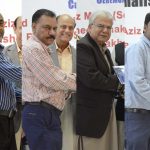 It is pertinent to mention here that President, Pakistan Sports Writers Federation (PSWF) and Secretary General of Association of International Press of Sports (AIPS) Asia, Amjad Aziz Malik had once again elected as General Secretary of AIPS Asia in the AIPS Asia Congress 2017 which was held in Islamabad in October.

SJAS organized a ceremony at Sindh Scouts Auditorium to honour the services of the senior sports journalists Abdul Rasheed Shakoor and Faizan Lakhani, who covered around 100 international matches for Pakistan.

SJAS presented a gold medal to Amjad Aziz Malik, while presented a memento to Lakhani and Shakoor.

Sindh Information Minister, Syed Nasir Hussain Shah was the chief guest who lauded the services of Amjad Aziz Malik, Faizan Lakhani and Abdul Rasheed Shakoor in the field of sports and organizing various events and said that they made their country proud globally.

Minister also assured the media persons that the government of Sindh will provide all kind of support to journalist’s community. “We are always available for journalists financially and trying to solve their problems,” added Nasir Hussain Shah.

Speaking on the occasion, Minister hailed SJAS services and appreciated the entire association for organizing this event.

Shakoor thanked SJAS for honoring him.

Faizan Lakhani thanked all his seniors for their endless support. Lakhani covered around 100 international matches.

Speaking on the occasion, Olympian Islahuddin suggested media persons “to promote hockey at their fullest,”
Islahuddin appreciated the services of SJAS.

Senior sports journalist, Abdul Majid Bhatti appealed to the Sindh Sports Minister, Syed Nasir Hussain Shah that the Sindh government should develop more grounds in Sindh and requested the government of Sindh to look after those former journalists who are living from hand to mouth.