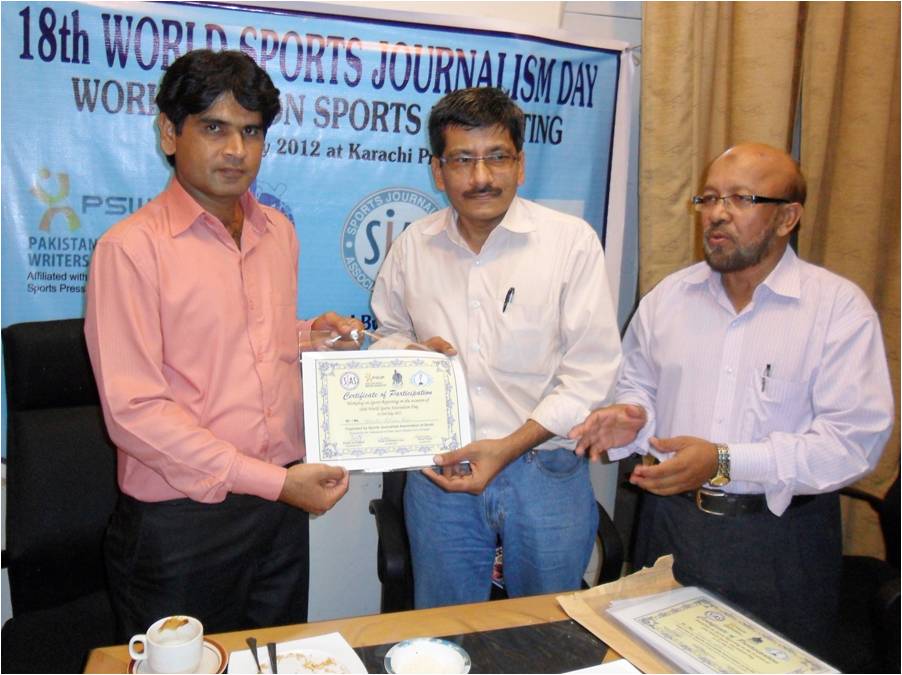 By Rashid Ali Siddiqui, Karachi – Pakistan: The 18th International Sports Journalists Day was observed in Pakistan by Sports Journalists Association of Sindh (SJAS) under the guideline of AIPS on Monday, July 2, 2012 with great enthusiasm.

The workshop to commemorate the day was held in Karachi Press Club, the biggest journalists club in Pakistan. The respected veteran sports journalist Anisuddin Khan, ex-Sports Editor of Pakistan’s premier APP news agency, highlighted the importance of the day with his key-note lecture.

He said that sports journalism highlights the achievements of human beings. It also pens down history of events. “A sports journalist must know the importance of news with background knowledge of the sports, he is covering. The correct information will make his or her report authentic,” he advised.

He was also of the view that despite the popularity and flood of electronic media, print media is still a powerful medium in which everything is reported in black and white. “You see a package on a TV channel and next day you will forget and see another one but print thing remains in record and can be quoted as reference,” he maintained.

President SJAS Rashid Ali Siddiqui speaking on the occasion, advised the young journalists to remain neutral in their reporting and their reports should be balanced and informative. “You are judge of good and bad, positive and negative so you should refrain from becoming partial in your reporting,” he stated.

Ubaid-ur-Rehman Awan, Secretary SJAS, threw lights on the challenges and problems facing sports journalists and said that they could be mitigated through mutual understanding. He informed that SJAS is the only sports association in Pakistan, which is celebrating the World Sports Journalists Day consecutively for three years since in its inception in 2009. Zubair Nazir Khan, SJAS Managing Committee member, described the sports reporting as challenge for the journalists. They should be more careful in reporting the records of athletes, he said.

Mehmood Riaz, chief reporter from Express/Hero TV, said that while working for a TV channel one should be ‘smarter than harder’. He said that TV reporting is entirely different from print media, where deadline comes after 24 hours. Imtiaz Solangi, reporter from KTN, Sindhi language channel, said that sports coverage has little time in regional language channels. There is a need to increase its time to generate interests among the masses. Muhammad Asghar and Zahid Ghaffar, SJAS MC members also spoke on the occasion.

Secretary, Karachi Press Club, Moosa Kaleem said that he started his career with sports reporting and enjoyed his work. He also distributed certificates among the participants.