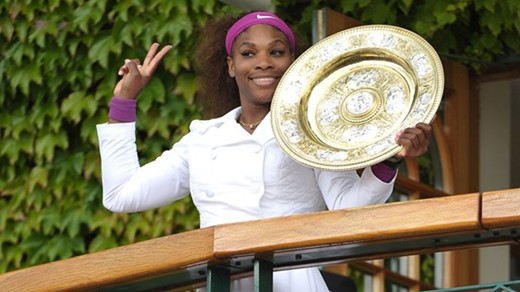 London, July 09, 2012: : Serena Williams won her fifth Wimbledon title with a 61 57 62 victory over Agnieszka Radwanska in Saturday’s ladies final. She has now won 14 Grand Slam singles titles, which puts her in fourth place in the Open Era list for most Grand Slam titles behind Steffi Graf, Chris Evert and Martina Navratilova.

Williams shot to an early lead in the opening set, breaking her opponent at the first time of asking, and soon found herself 5-0 up. Radwanska, who was making her debut in a Grand Slam final and who has been suffering from a respiratory illness during the last week, managed to get one game on the board before Williams closed out the set 61.

It looked like the second set was going the way of the first after the American claimed an early break but a rain delay seemed to favour the Pole. Radwanska came out rejuvenated, clawed back the early break and then secured another to force a decisive third set.

An enticing final set ensued but it wasn’t long before Williams rediscovered the form that saw her take the first set and she wrapped up the match – and the Championships – in two hours two minutes.

“Each title is definitely special. This one is super special. It’s Wimbledon. I’ve wanted to win here so bad. I still can’t believe that I was able to come through and win my seven matches,” said WIlliams. “This one obviously is special to me because it’s a huge comeback for me. You know, I couldn’t ask for anything else. I really couldn’t.”

“These are the best two weeks of my life. When practising and playing tennis all your life, I think it’s a dream for everyone to be in the final,” explained Radwanska. “I’m just very happy. Of course it’s always disappointing to lose, especially after a tough and good match. But so very happy about my final.”

This result ensures Belarus’s Victoria Azarenka will reclaim the No. 1 spot when the WTA Rankings are released on Monday 9 July, while Radwanska will record a career-high ranking at No. 2.

Williams made it an even better day by teaming up with older sister Venus to also win the women’s doubles title in the last match of the day on Centre Court. The Williams sisters defeated Czech duo Andrea Hlavackova and Lucie Hradecka 75 64 to claim their fifth doubles crown.

Jonathan Marray ended Britain’s drought for a men’s doubles champion when he claimed the title with Denmark’s Frederik Nielsen. The wildcard pairing defeated No. 5 seeds Robert Lindstedt and Horia Tecau 46 64 76 67 63 in the final.

“I was really focused on court and I really believed that I could do it,” said Bouchard. “I’m really happy to have pulled through and I guess make Canada proud and hopefully continue with more success like this.” —– ITF/Photo: Paul Zimmer