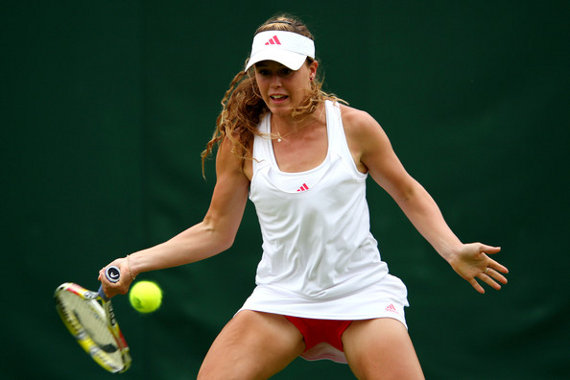 London, April 18, 2012: The ITF today confirmed the first two entries for the 2012 Olympic Tennis Event after Tripartite Commission Invitation places were allocated in the women’s singles to Stephanie Vogt of Liechtenstein and Veronica Cepede Royg of Paraguay. The Olympic Tennis Event will take place at the All England Club, Wimbledon on 28 July – 5 August 2012.

The Tripartite Commission consists of representatives from the IOC, National Olympic Committees (NOCs) and the ITF, with invitations available for singles players from nations with small Olympic teams. At the 2012 Olympic Tennis Event, Tripartite invitations are being allocated in the women’s singles only, so there will be two additional ITF places in the men’s singles event. ITF places are awarded by the ITF Olympic Committee to players who do not receive a direct entry.

Vogt, 22, receives a Tripartite invitation for the second time, having had to withdraw from the Beijing Olympic Tennis Event though injury. She reached a career-high ITF Junior World Ranking of No. 5, and is currently ranked No. 258 on the WTA rankings. Vogt has played 12 Fed Cup ties for Liechtenstein and won five titles on the ITF Women’s Circuit.

She will become the first player from Liechtenstein to compete in the Olympic Tennis Event. Cepede Royg, 20, will make her full Olympic debut having competed at the 2010 Singapore Youth Olympic Games. She has played 24 Fed Cup ties for Paraguay and broke into the world’s top 200 for the first time in 2012, currently standing at No. 212. Cepede Royg has been a member of several ITF/Grand Slam Junior Touring Teams supported by the Grand Slam Development Fund.

She will become the first player from Paraguay to contest the Olympic Tennis Event since Rossana de los Rios in 2000. The entry process for all other places in the tennis event is ongoing. Direct entries will be based on the official world rankings of Monday 11 June. Nations will then be advised which players are eligible for direct acceptance, and can submit their player nominations to the ITF and make applications for ITF Places.

The full list of entries (men’s and women’s singles and doubles) will be announced on Thursday 28 June. Entries for the mixed doubles will be confirmed on site during the event.

In the men’s and women’s doubles events, there will be 24 direct acceptances and eight ITF places.

In the mixed doubles event, there will be 12 direct acceptances and four ITF places.