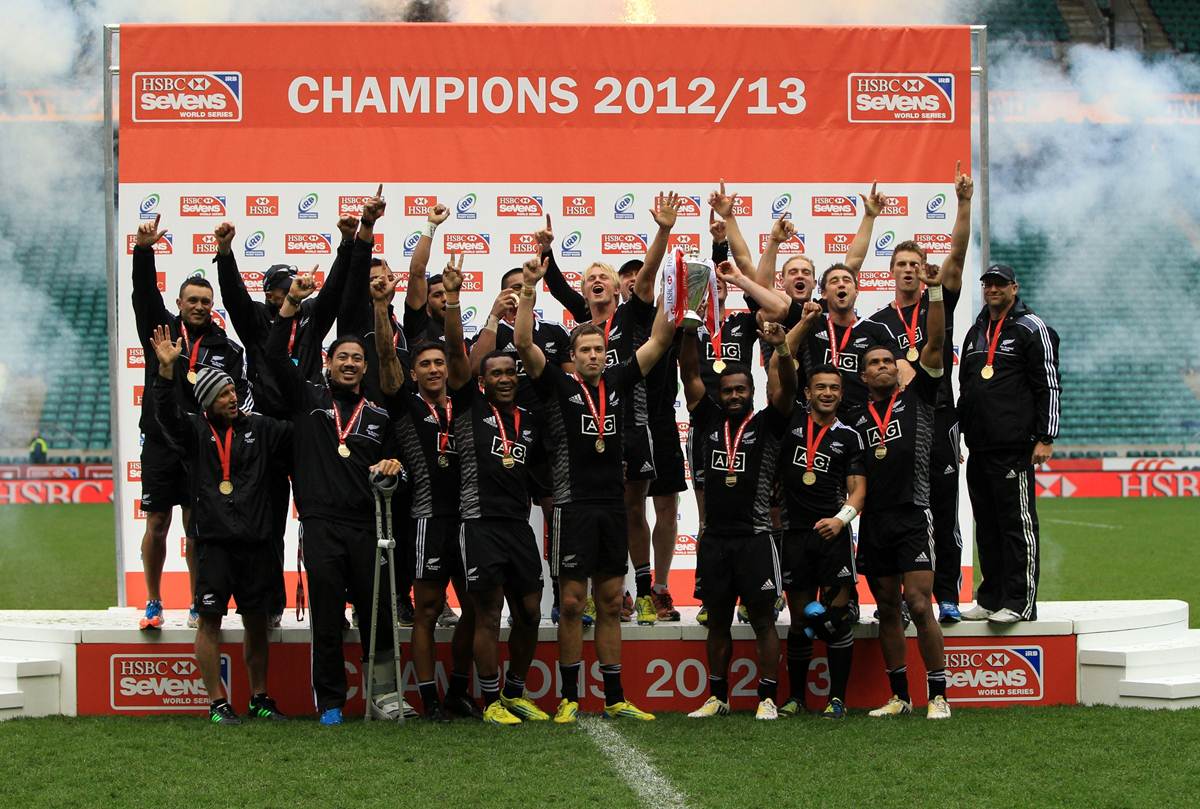 London, May 13, 2013: Imperious New Zealand captain Tim Mikkelson lifted the HSBC Sevens World Series trophy for 2012/13 as the kiwis capped a fine season in style by winning the ninth and final round, the Marriott London Sevens.

Six weeks before the RWC Sevens in Moscow, the New Zealanders beat Australia 47-12 in the Twickenham Cup final to rubber-stamp a superb season of achievement and finish with 173 Series points, 41 ahead of second-placed South Africa on 132.

Fiji finish third in the Series on 121, ahead of Samoa (104) and Kenya (99), who reached a fifth Cup semi-final of the season in London. Tournament hosts England beat the Kenyans to third place and finish the Series in sixth place.

As well as welcoming a world record one-day crowd of 71,898 on Saturday, London’s tournament also achieved a new two-day best for Rugby Sevens with 113,023 fans attending over the weekend.

In the battle for core team status on the 2013/14 Series it was Scotland, Spain and Portgual who prevailed after a series of tense knock-out matches.

Spain beat Iberian neighbours Portugal in the first qualifying semi-final to guarantee their core team berth and Scotland overcame Russia. The Portuguese then came from 5-0 down to edge the Russians 10-5.

Brett Gosper, IRB Chief Executive Officer, said: “Over the course of this superb season of Rugby Sevens more people than ever before have watched the game in packed stadia and also on television worldwide. We have seen the competitive edge and excitement of the Series rise again, which is very encouraging as we now build towards the Rugby World Cup Sevens in Moscow on 28-30 June.”

Giles Morgan, Group Head of Sponsorship & Events, HSBC Holdings plc commented: “The record attendance here in London this weekend for the final round of the HSBC Sevens World Series is just fantastic to see. This is HSBC’s third season as title sponsor of the Series and each year more and more fans are realising how enjoyable and exciting rugby sevens is as a sporting and social occasion. HSBC is committed to helping the growth and development of the sport all around the world and it’s great see so many different nationalities here enjoying the Rugby Sevens as they have done across all nine rounds around the world.” —- IRB