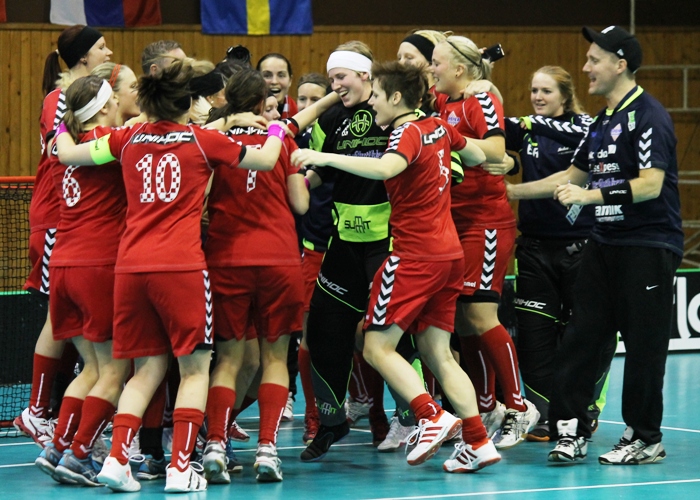 Helsinki – Finland, Oct 15, 2012: Like in the Women´s finals these two teams had come from the same group so had already met in this tournament. In that game Lielvarde got out to a 7-2 lead and Slevik could never get it back. In this game it was Lielvarde who found themselves behind after Slevik had a 5-0 second period. However, it was Lielvarde´s turn to make the big comeback and from 3-6 down at the beginning of the last period, they turned the game in magnificent fashion for a final score of 9-6, and the title of 2012 EuroFloorball Cup champions.

The opening goal came in a Lielvarde powerplay when Mihails Kostusevs found himself totally unmarked in the perfect position right in front of goal and he made no mistakes with his shot. When Håkan Wingskog intercepted a Lielvarde pass he was like a steam train down the centre of the court straight at goal and put the ball in the net. Score 1-1 at 11:39. When Lielvarde scored from a free-hit close to goal half a minute later there was a lot of angry finger-pointing on the way back to the Slevik bench. Artis Savins goal was a perfectly placed shot between two high defenders, one low defender and the goalkeeper.

Slevik had an amazing second period, winning it 5-0. The first two goals were similar to their first, players running unchallenged down the middle of the court and being left to shoot freely at goal. When Johan Åhlberg had scored Slevik´s third goal in three minutes, Lielvarde wisely changed their keeper, bringing on Janis Salcevics, who was later named in the All-Star team. Despite the change, Slevik were still able to score another two goals, one coming when Lielvarde were caught napping. A new ball had been needed for a corner hit (after someone had trodden on the old ball) and as soon as it was on the court the referee blew time on and Slevik took it quickly passing to Sondre Hansen who was totally free in front of goal while the Lielvarde bench were still deciding which line was going on. The period finished with the score at 6-3 in Slevik´s favour it looked like they were in control as Lielvarde began to struggle in defence.

Following the common theme of this tournament, it was not really a surprise that Lielvarde mounted a comeback in the last period. And what a comeback! Toms Akmenlauks was the master of destruction for Lielvarde scoring 3+2 in the final period. He provided the pass for Kostusevs to start the scoring then he andSandris Virsnitis combined to score the next two within 30 seconds of each other. With the score now at 6-6, Lielvarde were unstoppable. Akmenlauks made a long shot/pass from near his own bench all the way to the goal and from the rebound, it was Kostusevs scoring his third for the match.

Mikus Valpeters and Akmenlauks sealed the match when they scored at 54:04 & 54:19 – there was not to be another comeback. These two teams both provided the spectators and online viewers with some great matches and were worthy finalists. Lielvarde can now join Sveiva in planning their travel to Tampere, Finland in October 2013 for the Champions Cup. Best players were Thomas Straete and Akmenlauks.

When Sveiva and Nauka-Trevelstroy met in their group match it was a very tight game, with Sveiva scoring the equalising goal with just 20 seconds left on the clock and then winning on penalty shots. This game was just as tight, Sveiva again coming from behind, this time to win 4-3.

The first period totally belonged to Nauka-Trevelstroy, but disappointingly, they could still only take a one goal lead to the break – something that would prove very costly for them. Sveiva never really threatened the Nauka goal, withNadezda Lapina having to make only one save, while at the other end Malin Dahler was doing everything possible to keep her team in the match, making 17 saves. Dahler made just the one miss in this period when she couldn´t cleanly make the save from the clever shot of Ekaterina Pushkina.

Sveiva had a lot of trouble opening the game, being able to get the ball out of their own area but not very often finding one of their own players with the opening pass, which meant that Nauka-Trevelstroy continued to attack their goal. Sveiva´s defence was too passive, standing and watching while Natalia Zhuravleva received a pass while only one metre in front of the goal and just letting her put it in the goal. It seemed to take this second goal before Sveiva actually started playing.

The high forechecking of the Nauka-Trevelstroy forwards continued to force the Sveiva defence to use long passes and high balls to try and get out of their own area, always a low percentage option. Finally, Sveiva scored from a free-hit byHilma Thofte that was assisted by some good work by one of the Sveiva forwards making a well-timed move in front of the Nauka goalkeeper, completely blocking her view. Sveiva had a couple more chances, including one very near goal that was saved by Yulia Viktorova just millimitres before it crossed the line. The last couple of minutes were played as though it was the last minute of the final period with both teams seemingly in a position of having to score.

The game had certainly evened out and the third period saw plenty of chances at both ends, some successful, some close, and some badly missed. Thofte scored her second goal of the final in a powerplay awarded to Sveiva when Nauka-Trevelstroy (for the second game in a row) were penalised for too many players on the court. The 2-2 score was short-lived as Nauka-Trevelstroy immediately replied through a goal from their best player, Viktoriia Okulich.

Just like in the first game, where they continued to come from behind, Sveiva did not give up. When Nauka now took the ball up the court, their defenders held back too far, creating too much space for Sveiva to be able to use when they got turnover possession. Victoria Hansen capitalised on this space, making a fast break down the right side of the court and shooting beautifully to the goal, beating a surprised and disappointed Lapina. It was again Hansen, at 57:12, who slapped a lifted pass to the goal, giving Sveiva the lead for the first time in the match.

Nauka desperately tried to put the game into overtime, but just like at the beginning of the match it was Dahler who continued to deny them. Surprisingly, Nauka didn´t take their goalkeeper off in the dying minutes of the game and Sveiva were able to hold on to become EuroFloorball Cup champions for 2012. They now earn themselves a place in next year´s Champions Cup in Tampere, Finland. Best players were Dahler and Okulich. —- IFF/photo by Martin Hudák