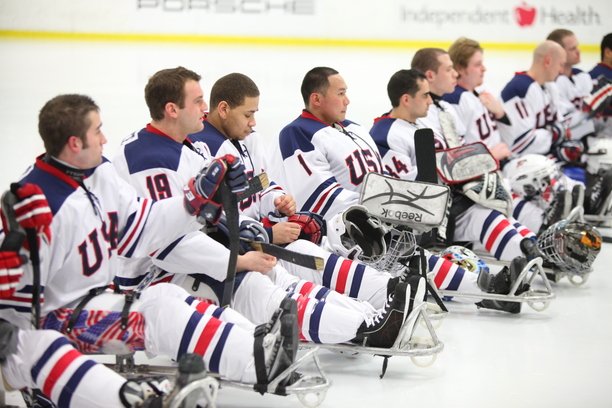 Alexi Salamone, Taylor Chace and Steve Cash were named to the All-Tournament Team for the Americans, joining Korea’s Seung Hwan Jung and Canada’s Adam Dixon and Billy Bridges. Salamone and Taylor Lipsett worked together to anchor a powerful front line for USA in the Championships, notching two goals and four assists and six goals and two assists, respectively.

“It’s unbelievable. Winning in Vancouver was one of the greatest things, and here in Norway we dominated as a team once again,” Salamone said. “The feeling is incredible.”

USA made quick work of Korea in the final contest, as Josh Pauls scored just 2:57 minutes into the game. Lipsett then netted two goals early in the second and Salamone caught a pass off Lipsett later in the period to give the Americans the 3-0 advantage heading into the final frame. Jong Kyung Lee put Korea on the board just 1:34 into the third period, though Lipsett countered with another goal – unassisted just 16 seconds later – that proved to be the final score of the game. Cash played a crucial role in the Championships for the USA notching a 92 save percentage. Despite the loss for Korea, it was the nation’s first time on the Ice Sledge Hockey podium at major international event.

“We didn’t expect this result,” said Hwan Jung, who had three goals and two assists at the Championships. “It was meaningful for me personally first of all, as well as for the development of Ice Sledge Hockey in Korea.”

As for USA, it hopes to maintain its top position in the Ice Sledge Hockey world.

In the bronze-medal contest, Canadian captain Greg Westlake struck first, scoring off an assist from Bridges and Dixon at the 8:08 mark in the first period. Brad Bowden then added another score for Canada midway through the second and Benoit St-Amand kept the Czechs from scoring to help Canada coast the rest of the game to secure a third-place finish at the Championships.

“We actually pulled it together,” Bowden said. “We had a tough loss from the U.S. there and it was kind of hard to bounce back from that, but we had to pull our socks up and finish with a medal. “We won the bronze. It wasn’t necessarily what we came here for but we’re proud of what we achieved today. We just tried to battle to bring home some kind of hardware for our country.”

Canada, which outshot the Czech Republic, 23-8, has now medalled at five of six World Championship appearances, garnering bronze in the last two. Bridges finished the tournament with two goals and four assists, and Westlake and Bowden each had three scores and an assist in the event. Adam Dixon had two goals and a pair of assists. David Palat had a goal and two assists at the Championships for Czech Republic, while his teammate Michal Vapenka compiled a 94 save percentage in goal.

For complete coverage from the Championships, please visit www.icesledgehockeyworlds.com.