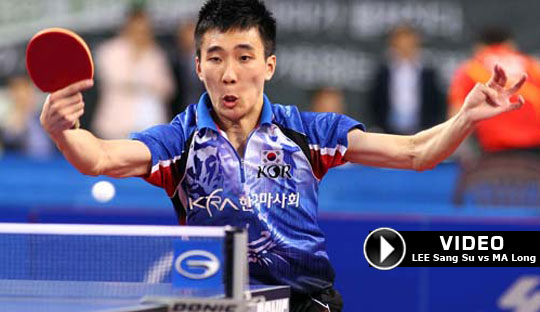 Lausanne-Switzerland, May 20, 2012: Korean Shocks, Not seeded and not selected for the recent LIEBHERR World Team Championships in Dortmund, the host nation’s 20 year old LEE Sang Su caused the biggest upset on the penultimate day of play, Saturday 19th May, at the GAC GROUP 2012 ITTF World Tour KRA Korean Open in Incheon.

Conversely for MA Long, he remained unbeaten during the last six months of 2011, ascending to the top spot on the World Rankings and one month ago secured his place in the forthcoming London Olympic Games. LEE Sang Su will not be in London and was not nominated by Korea for the recent Asian Olympic Qualification tournament.

Alas for the dynamic LEE Sang Su, the euphoria was short-lived; he was beaten at the quarter-final stage by Japan’s Kazuhiro CHAN, like the Korean a qualifier and a man in form. Prior to the most recent GAC GROUP 2012 ITTF World Tour tournament, the Chile Open, he had never progressed beyond the third round of a Tour Men’s Singles event. In Chile he reached the final losing to Singapore’s GAO Ning, in Incheon he is once again in the penultimate round.

A shock defeat for MA Long but no such disappointments for his colleagues, the next three on the seeding list; ZHANG Jike, WANG Hao and XU Xin all booked Men’s Singles semi-final places.

Meanwhile, in the Women’s Singles event, there were strange happenings.

In the opposite half of the draw an-Chinese affair sees DING Ning, the no.1 seed meet LI Xiaoxia, the no.4 seed in the Women’s Singles semi-finals; neither being troubled on their path to the penultimate round.

A semi-final place for DING Ning in the Women’s Singles event and one place further in the Women’s Doubles competition; in partnership with LIU Shiwen the duo faces Korea’s LEE Eun Hee and PARK Mi Young in the final. The host nation duo received a walk-over against top seeds and reigning World champions GUO Yue and LI Xiaoxia.

No place in the Women’s Doubles final for the reigning World champions but that is not the situation in an all-Chinese Men’s Doubles final; MA Long and XU Xin meet top seeds WANG Hao and ZHANG Jike.

Meanwhile, in the two events decided on the penultimate day of play; Sweden’s Kristian KARLSSON won the Under 21 Men’s Singles title with Japan’s Kasumi ISHIKAWA clinching the counterpart female version.