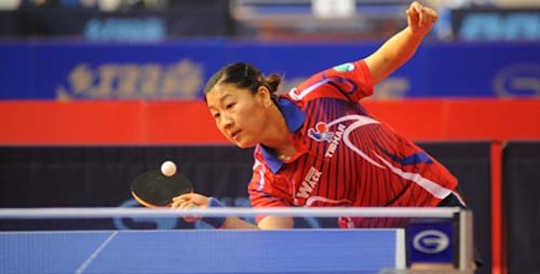 Not in the best of form in the qualification phase and having to rely on a stroke of fortune to gain a place in the main draw, LI Xue of France caused the biggest upset on the third day of play, Friday 20th April 2012, at the GAC GROUP 2012 ITTF World Tour Spanish Open in Almeria.

Currently LI Xue stands at no.79 on the Women’s World Ranking list; conversely TIE Yana, who has won seven Women’s Singles titles on the ITTF Pro Tour (now the GAC GROUP World Tour), is at no.8 and was one of the favourites for the title.

The defeat meant she finished in second place in the group; only the player finishing in first place in each group was guaranteed a place in the main draw.

Fortunately for LI Xue there were three “Lucky Loser” places available for second placed players. Drawn randomly out the hat, one of those went to LI Xue.

A lucky day for LI Xue but for 11 year old Mima ITO (Japan), who one day earlier had created history by being the youngest player ever to qualify for the main draw of a women’s event on Tour, it was the end of the road. In both the Under 21 Women’s Singles and the Women’s Singles events she was beaten by 18 year old YANG Ha Eun (Korea).

Defeat for the third seed but no great problems for the top two seeds in the Women’s Singles event; both FENG Tanwei (Singapore) and Kasumi ISHIKAWA (Japan), the respective top two seeds, duly booked third round places as did Ai FUKUHRA (Japan) the fourth seed.