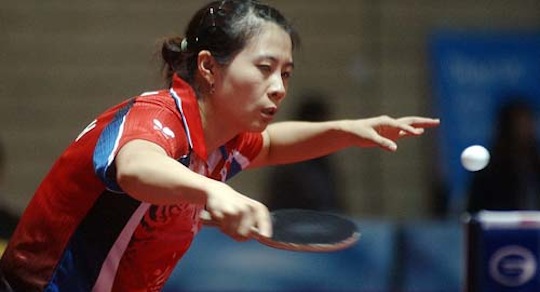 It was for 29 year old GAO Ning, the no.2 seed, his second Men’s Singles title on Tour, his previous success being in India in 2007; for KIM Kyung Ah, the no.5 seed, it was her second in succession, her seventh in total. One week earlier, she had won in Almeria.

On the concluding day of play, GAO Ning was never seriously troubled; at the semi-final stage he beat compatriot ZHAN Jian, the no.4 seed, in four straight games before recording a five games win in the final over Japan’s Kazuhiro CHAN, the no.7 seed.

However, for 34 year old KIM Kyung Ah, it was a somewhat different story. She was extended the full seven games distance by her compatriot, 18 year old KIM Kyung Ah, the no.7 seed, at the semi-final stage, before recording a straight games victory over Singapore’s LI Jiawei in the final, the no.4 seed. Success for Singapore in the Men’s Singles event and earlier in the day, the small south-east Asian country had enjoyed success in the Men’s Doubles competition.

Top seeds, YANG Zi and ZHAN Jian, the runners up one week earlier in Spain, went one step better in Santiago, they beat Korea’s KIM Dong Hyun and LEE Jung Woo, the no.3 seeds, to clinch gold and as a partnership won their first ever Tour Men’s Doubles title.

Success for the no.1 seeds in the Men’s Doubles event and it was the same in the Women’s Doubles competition. In an all-Japanese final, Hiroko FUJII and Misako WAKAMIYA beat Yuka ISHIGAKI and Yuri YAMANASHI, the no.4 seeds, to collect their third Women’s Doubles Tour title. In 2007 they won in Korea and in Japan