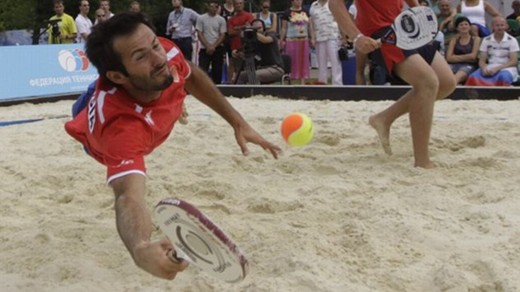 London, Feb 18, 2013: The second ITF Beach Tennis World Team Championship will take place at Russia’s National Tennis Centre in Moscow on 18-21 July 2013. The Championship returns to last year’s venue as part of a three-year agreement with the Russian Tennis Federation.

The Team Championship is a mixed competition in which nations compete against each other on a knock-out basis. Each team is comprised of two men and two women, with ties consisting of a men’s doubles, women’s doubles and mixed doubles rubber. Fifteen teams were represented at the inaugural championships, with organisers expecting an increased entry in 2013.

Italy are the defending champions, and remain the most dominant nation on the beach tennis circuit. In last year’s final they saw off a spirited challenge from second seeds Brazil 2-0. The third place play-off was more keenly contested, with the hosts going down 2-1 to France in a deciding mixed doubles match.

ITF President Francesco Ricci Bitti said: “We were delighted with the success of the inaugural world team championship following the rapid growth of the Beach Tennis Tour. The ITF is proud of its family of international team competitions, and hope that this championship will attract even more nations to the sport.”

Russian Tennis Federation President Shamil Tarpischev said: “We are very excited to be hosting the ITF Beach Tennis World Team Championships for their first three years and look forward to welcoming even more nations this year to our National Tennis Centre in Moscow. Beach tennis has fast become a very popular sport both in Russia and internationally.” —- ITF/Photo: Dennis G. Iljushenkov