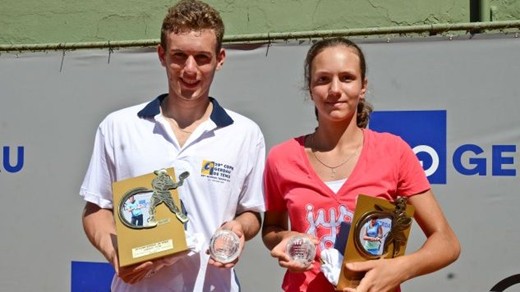 The Championships have moved from the Foro Italico in Rome, where they were staged by the Italian Tennis Federation in 2009-11. On home sand the Italians reigned supreme for the first three years, with Alessandro Calbucci and Luca Meliconi claiming the men’s title, and Laura Olivieri and Simona Briganti the women’s title in 2011.

The Italians will face increased competition as they bid to hold on to their titles this year, with a record number of nations expected to contest the event. Seventeen countries were represented in the 2011 Championships. ITF President Francesco Ricci Bitti said: “It is a positive step for the Championships to move to a new venue in only their fourth year, reflecting the growth of the sport worldwide. Having successfully hosted last year’s European Beach Tennis Championships, the Bulgarian Tennis Federation is sure to stage an excellent event, following on from the high standards set by the Italian Tennis Federation.”

A large increase in the number of tournaments around the world has provided increased opportunities for players to compete at a professional level, and evidence suggests that the overall playing standard has improved as a result.

The Dominican Republic boys’ team and Cuba girls’ team won the North America and Caribbean pre-qualifying event for the Junior Davis Cup and Junior Fed Cup by BNP Paribas Finals. Sixteen boys’ and 15 girls’ teams contested the competition in Santo Domingo, Dominican Republic last week. Dominican Republic secured their place in the final qualifying event with victory after the singles rubbers against Costa Rica. Manuel Castellanos defeated Julian Saborio in the first singles while Juan Bisono overcame Daniel Gutierrez in the second singles. The girls’ event went right down to the wire, with Costa Rica falling at the final hurdle for the second time in Santo Domingo.

Ariana Rahmanparast gave Costa Rica an early lead after defeating Yenise Macahado in straight sets, before Yusleydis Smith fought back from a set down against Mariela Haug to level the tie. The doubles went the way of the Cubans with Smith and Amanda Gomez coming from behind to defeat Haug and Rahmanparast.

The two 16 & under teams advance to the North/Central America and Caribbean final qualifying event which will be held in Merida, Mexico on 26-28 April. They will compete against teams from Canada, Mexico and USA for the chance to qualify for the Junior Davis Cup and Junior Fed Cup by BNP Paribas Finals to be held in Barcelona, Spain in September.

Mathias Bourgue (FRA) and Anna Danilina (KAZ) won the boys’ and girls’ titles respectively at the Copa Gerdau Grade A event in Brazil last week. It was a second Copa Gerdau crown for Bourgue, following on from his success in 2010, while Danilina extended her winning streak to 20 matches after claiming both the singles and doubles titles for a second consecutive tournament. Eleventh seed Bourgue, who missed the competition in 2011 with a hip injury, took out a plethora of seeds on his way to the title. He defeated seventh seed Joshua Ward-Hibbert (GBR), third seed Gianluigi Quinzi (ITA) and second seed Kaichi Uchida (JPN) before overcoming eighth seed Kimmer Coppejans (BEL) 63 62 in the final.

Ukrainian players dominated this year’s ITF/Tennis Europe 14 & Under Development Championships which took place in Antalya, Turkey on 15-25 March. The event, which was hosted by the Turkish Tennis Federation, attracted players from 18 countries and comprised a two-day training camp followed by two Category 2 tournaments. Top seed Denys Klok (UKR) won both the boys’ singles titles without dropping a set defeating his compatriot Vladyslav Chumak in the final of the two tournaments. Chumak and Klok went on to win the first boys’ doubles final against the Estonian pair of Mattias Siimar and Kristjan Tamm 16 76(4) [10-6]. The following week saw the Ukrainians overcome second seeds Mikalai Haliak and Maxim Tybar from Estonia in the final 63 63.

Unseeded Natalya Malenko (UKR) proved to be the star of both girls’ events, beating top seed Anastasiya Klymenko (UKR) 62 76(3) and 75 63 respectively in the final of the two tournaments. The girls then teamed up to win the first week’s doubles event overcoming Vera Lapko and Aryna Sabalenka from Belarus 61 76(4) in the final. The Belarusians went on to win the second tournament, defeating Krista Cerpina and Gundega Pastore from Latvia 75 63.

ITF/Tennis Europe Development Officer Hrvoje Zmajic commented: “Thanks to the ITF/Tennis Europe Development Programme, the development Championships have once again helped a number of our smaller nations to compete in this high quality tournament. The facilities here in Antalya are first class and with ten matches over ten days, all players and coaches were able to make the most of the opportunity to work on their games and gain international experience.”

A number of today’s top professionals, including Victoria Azarenka and Marcos Baghdatis, have benefitted from playing this event in the past. For more information visit www.itftennis.com/development.

Hattingh and Hossam on form in Potchefstroom:

South Africa and Egypt dominated both the singles and doubles events at this years 18 & Under African Junior Championships, which were hosted by Tennis South Africa (TSA), the North West University and the Riaan Venter Tennis Academy (RVTA) in Potchefstroom, South Africa. As a change from previous years the 18 & under age category was played as a separate event from the 14 and 16 & under age categories, which will take place in Egypt in April.

The event, which featured 44 boys and 31 girls from 18 countries across Africa, saw Ilze Hattingh (RSA) and Karim Hossam (EGY) taking home gold in the singles and doubles events. Top seed Hossam defeated home favourite and second seed Wayne Montgomery (RSA) in the final in a fairly one-sided affair 63 62. Montgomery had his chance for revenge when the pair faced each other again in the doubles final.

Montgomery, who paired up with compatriot Matthew Rossouw (RSA), was up against Hossam and his Egyptian partner Mahmoud Zazou but the Egyptians destroyed local hopes, beating the South African pair 76(2) 75. Hattingh defeated the number one seed, Zarah Razafimahatratra (MAD), in the quarterfinals before overcoming her compatriots Janet Koch in the semifinals and Madrie Le Roux in the final. Hattingh then partnered Le Roux to take gold in another all South African battle, defeating Lynn Kiro and Theresa Van Zyl 64 64 in the final of the girls doubles. Although this is an individual event for ITF Junior ranking points, the players also accumulated points towards the AJC Team Trophy.

Mr Nelson Amanze, CAT Vice President and CAT President of Zone VI gave a speech thanking the organisers, TSA, the University and the RVTA. He also made a special mention to all the players and coaches for their sportsmanship and fighting spirit during the week. For more information visit www.itftennis.com/development.

The FFT hosted the 38th Tennis Europe AGM in Lyon, France last week. A total of 86 delegates representing 36 member nations were in attendance, which was also the location of meeting location for the organisation’s Junior and Development Committees, as well as the Board of Management, concluding their first year together since being elected at the last AGM. For more information visit www.tenniseurope.org.

History of Tennis in Argentina launched:

Tennis journalists Eduardo Puppo and Roberto Andersen have co-written History of Tennis in Argentina, a three volume book which comes with a CD e-book and 1300 pages of statistics. For more information visit www.tenniscom.com

View all posts by: Abdul Rahim
One Response to “ITF News of the Week: Bulgaria stages 2012 Beach Tennis World Championships”