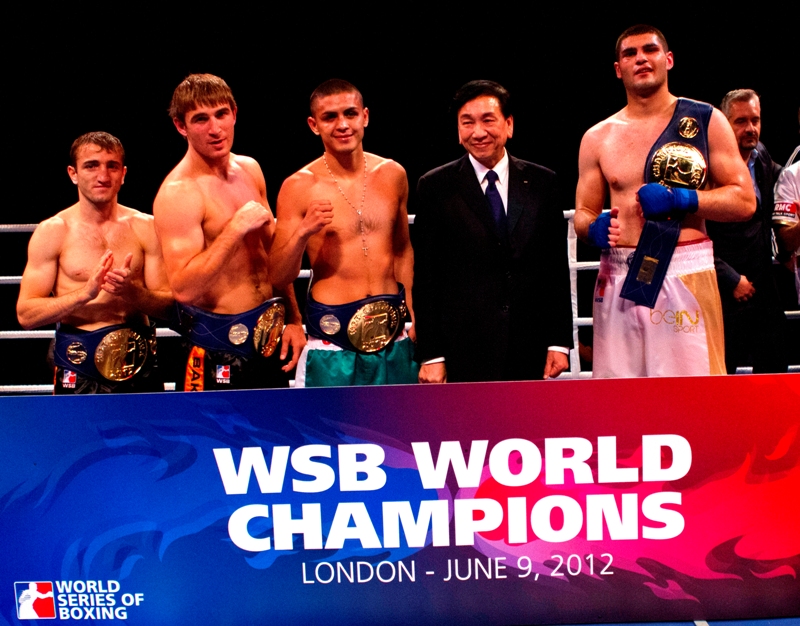 London, Great Britain, June 9, 2012 – A sensational night of pugilistic action saw ten of the World Series of Boxing’s best boxers take to the ring at the ExCeL London, the venue for the boxing event at the Olympic Games, for five adrenaline and power packed bouts as the WSB crowned five World Champions in the British capital. A packed arena welcomed the competition’s top athletes who put on a real show to the delight of the crowds.

In the opening Bantamweight contest it was top ranked 27-year-old Baku Fires Gairbek Germakhanov versus the up and coming Elias Emigdio from the Mexico City Guerreros. The Azeri seemed to settle into a good early rhythm with the clever use of the jab, showing his experience to dominate the early exchanges. The 20-year-old Mexican came back strong though, with several quality punches, to edge the first round. The orthodox Emigdio then went on the offensive in the second, buoyed by his early display, only to be thwarted by the savvy Germakhanov, who was using his range to great effect. A pressure counter-puncher, the man from Baku Fires looked comfortable as he drew level on the judges’ scorecards after the second.

Throwing combinations, twos and threes, Emigdio was really positive, however a wonderful uppercut by Germakhanov in the third put him on his way to taking the round. Cut early in the fourth, above both eyes, Emigdio showed his was made of stern stuff, trying to find the angles, in true Mexican style, but Germakhanov was playing the waiting game and unleashing at the right moments to score the vital points with some stinging shots. Emigdio was getting stuck in a brilliant fourth round but once again the Azeri was coping well, moving effortlessly around the ring and clearly in the ascendancy was using his know-how to dominate. Clearly ahead on points, Germakhanov stuck to his winning tactics to close out the latter stages as he went on to win a quality contest.

After collecting his belt, Germakhanov thanked his team, declaring, “It is of the Baku Fires that I am number one, the training, the coaches, the staff, my teammates, this victory is for them and Azerbaijan”.

In the Lightweight match-up, Mexico City Guerreros’ Juan Romero looked at ease in the ring, calm and composed, throwing a variation of punches, confusing the Russian Adlan Abdurasidov in the early exchanges as he put the vital points on the board. The work rate of the Mexican was definitely getting the approval of the judges as he took the second and third rounds after some clever tactics against the Dynamo Moscow orthodox 21-year-old. The frustrated Abdurashidov, who ended the season as the top ranked boxer in the division, had to readjust his game plan to get back into the fight with the 22-year-old Romero continuing to use his speed and reach to great effect. The young Russian changed his approach and showed great resilience to claw his way back into the fight with some classy counter punching as he took the fourth.

Keeping the flow and the movement, Abdurashidov was now in the ascendancy, landing some solid combinations in the fifth and sixth as Romero got frustrated and unable to cope with the endeavour of his rival, the Mexican was now being worn down. It was now all to fight for as both boxers were almost equal on points after six rounds. A beautiful right hand counter punch by Abdurashidov was soon followed by a stinging left hook from Romero in an electric final round but it was the speed of the Mexican that saw him take the overall victory by split decision.

A jubilant Juan Romero expressed his joy by saying, “I am very happy. I owe this to my family, all the people who have accompanied me and my fans. Viva Mexico”

Up next was the much anticipated showdown between the Middleweight Ukrainian winning machine Sergiy Derevyanchenko and the rising star Heybulla Mursalov from Baku Fires. The experienced 26-year-old Dolce & Gabbana Milano Thunder orthodox fighter, the reigning WSB World Champion from 2011, cleverly used his jab to keep his opponent from Azerbaijan at bay in the early stages but the unfazed Mursalov threw some stiff jabs of his own.

Switching stances, Derevyanchenko was moving inwards and throwing some hard uppercuts but 21-year-old Mursalov seemed content to soak up the pressure from the Ukrainian and getting a feel for his opponent. Derevyanchenko just edged the first, having landed the most punches. Midway through the second round, Mursalov stepped up a gear, worked the body of his rival with some furious hooks to the body before an overhead left sent Derevyanchenko to the canvas, taking the second round in spectacular fashion. The youngster was now brimming with confidence and was showboating a little, trying to unnerve the Ukrainian, but the Milano Thunder man went back to using the jab to take the third. Quality footwork, perfect defences, and a great mix of shot selection had Derevyanchenko back on top in the exchanges as he took the fourth.

Mursalov needed to apply the pressure after being too sporadic up until the fifth but it was the Ukrainian who continued to dominate with some well placed shots to take another round on the judges’ scorecards. Whatever Derevyanchenko had thrown at him, he responded in style with some swift measured combinations, it was textbook boxing from the defending champion. The jab continued to be his calling card and the classy Derevyanchenko went on to take the bout with a resounding win to maintain his unbeaten record in the competition. Mursalov will have been proud of his performance and played his part in a sensational fight.

A bruised but happy Derevyanchenko declared, “It is a great feeling to win this title again, this year the competition was so much stronger so I am delighted with this achievement”.

The penultimate contest of the night saw two unbeaten boxers from the same team, Baku Fires, battling it out for the Light Heavyweight title. It was the top ranked 22-year-old orthodox Azamat Murtuzaliyev against the tactically astute Ramazan Magomedau, both from Azerbaijan. Tentative early on, it was the more aggressive Magomedau who scored the vital points to take the first round. Piling on the pressure by being the aggressor, the 26-year-old Magomedau looked comfortable as he dictated proceedings from the centre of the canvas, finding his range with some solid combinations. With two WSB campaigns under his belt, the confident Magomedau was switching stances, confusing Murtuzaliyev, before unleashing powerful shots. At the end of the third, the younger of the two Azeri fighters pulled a muscle in his back and was unable to continue, Magomedau winning by TKO to become the WSB World Champion 2012.

Magomedau beamed, “One of the hardest fights that I have been in, it is unlucky for Azamat to get injured. I am a World Champion. Baku Fires are Number one!”

Heavyweights Filip Hrgovic from Paris United and Ruslan Myrsatayev from Astana Arlans brought the roof down at the ExCeL London in the final fight of the night. AIBA Youth World Champion Hrgovic from Croatia looked in top shape coming into the bout, using his range and height advantage to great effect by throwing hard one-twos towards his opponent and taking the points in the first three minutes. Although the 27-year-old Myrsatayev was more positive in the second, looking to land with some hard overheads, the young Hrgovic’s tactics were working a treat as he kept the Kazak at arm’s length by throwing straight combinations down the middle to edge it in the second.

The 20-year-old Hrgovic’s game plan continued to work as he came out on top in a gruelling third round that saw both boxers throwing several bruising punches. The fourth saw a more offensive Myrsatayev looking to land some heavy blows but he found himself once again countered by quality defences from the tall Croatian, who thereafter repeatedly found the target with some precise one-two combinations. In the fifth, the burly Kazak seemed to finally find the breakthrough as he landed a stiff hook but Hrgovic replied with some vicious shots that rocked Myrsatayev, who had to take a standing eight count. Having shown great heart against the much taller Hrgovic, the tiring Kazak was running out of steam and ideas and the Croatian continued to dominate, the tactical one-two combinations ensuring he took the remaining rounds to take the World title.

Hrgovic was delighted with his performance and upon receiving the World Champion’s belt declared, “It was tough but I boxed extremely well, this is a victory dedicated to my coach and my team, Paris United”.

The evening concluded a wonderful WSB campaign that had everything, showcasing the very best Olympic boxers in a groundbreaking new format. Next season promises to be even more special as the word spreads about a competition that is making a real difference to the sport and brings a fresh outlook on one of the noblest disciplines of all.