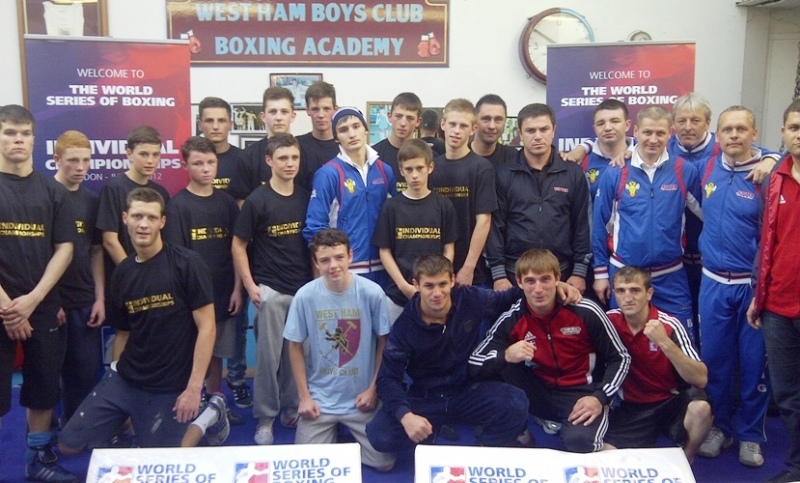 London, Great Britain, June 7, 2012: Taking time out of their busy schedules in the build-up to this Saturday’s Individual Championships, five of the ten finalists went to visit the legendary West Ham Boxing Club in the heart of East London to share experiences and tips with over 40 local boxers.

Hidden in a small street, the club can be found behind the ‘Black Lion’, a British pub, in a typical London setting. On arrival, the WSB boxers were dumbstruck by the aura of the club which has produced over 150 National Champions over the past 20 years.

Enjoying the sense of history seeping out of the walls of this iconic place, Gairbek Germakhanov, Adlan Abdurashidov, Heybulla Mursalov, Azamat Murtuzaliyev and Ramazan Magomedau went about training with the locals aged from as young as six to well into their thirties.

Although very congested in the club, the WSB boxers, along with their coaches and team representatives, were delighted to be training in such an environment, passing on their knowledge to the kids and so many budding boxers in attendance.

After gentle skipping and a bit of bag work with the various age groups, the WSB boxers stepped up the intensity levels to demonstrate elite level training. The onlookers were amazed at the skills and power on show.

After a good two hour work-out, the boxers gave away t-shirts, gloves and equipments and posed for pictures. The five WSB finalists had ensured a whole new legion of fans with all promising to be there ringside this Saturday to cheer them onto victory.

Mick, one of the club coaches, stated, “It is amazing for our kids to welcome in their club boxers of that stature, especially in such a depraved area. These kids need to dream and to have idols to look up helps them to keep on working hard and improving their boxing skills. Azerbaijani and Russian boxers are probably, at the moment, the best in the World and it was a privilege to have them with us. It was a fantastic idea to have these elite guys come to our club; I wish they could come more often”.

Mursalov, added, “I really enjoyed this training session, it was very special. The place, the people, everything was fantastic. I was really impressed by some of the young kids. In Azerbaijan, you do not find many parents who want to have their kids to take up boxing this early. It is a shame because it is important to start as soon as possible if you want to have a successful career in your chosen sport. Here you really feel that boxing is part of the culture and seeing these kids was an unforgettable experience”.

Friday sees the weigh-in take place in one of London’s most famous landmarks: the historic Covent Garden at 14.00 local time. Want to be at the Individual Championships this Saturday too? Tickets are still available. The fights will all be broadcast LIVE on worldseriesboxingtv.com