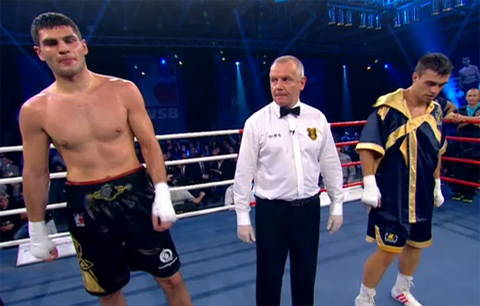 An unforgettable spectacle was put on by the hosts in the Ukrainian capital with an amazing light show greeting the packed arena. Top quality boxing action made for an amazing night but it was the strength and experience of the visiting team that gave them the edge. AIBA President and WSB Chairman Dr Ching-Kuo, Ukrainian Boxing Federation President and AIBA EC member Volodymyr Prodyvus, and Sergey Bubka, NOC President and IOC member, were all in attendance to enjoy the show.

The night’s opening contest saw Astana Arlans Kazakhstan’s 2011 President’s Cup winner Miras Zhakupov outclass the diminutive Ivan Ilnyskyy in the Bantamweight (54kg) category. The 22-year-old Kazak convincingly won each round, on each of the judge’s scorecards, to give his team the early advantage in the tie.

WSB’ Season I top ranked Lightweight (61kg), Yerzhan Mussafirov, was unable to cope with the speed and quickness of thought of Ukraine Otamans’ 27-year-old orthodox fighter Vyacheslav Kyslytsyn in the next contest. The home fighter clearly feeding off the enthusiasm of the home supporters to gain parity in the tie.

Middleweight (73kg) king Sergiy Derevyanchenko, the two-time WSB World Champion, knew he had been in a fight after narrowly avoiding defeat against his impressive hard-hitting compatriot Dmytro Mytrofanov in the following contest. Astana Arlans Kazakhstan were now leading 2:1 in the match.

One of the closest battles in the history of WSB saw Denys Poyatsyka come out of top in his bloody battle against Iran’s Ehsan Rouzbahani with two judges scoring the bout as a draw. The Otamans’ Poyatsyka was awarded to win despite being floored by a huge right hand in the third round of the Light Heavyweight (85kg) contest. The home team were now level on scores with one bout left with all to play for.

The experience and big height advantage of Astana Arlans Kazakhstan’s giant Croatian Filip Hrgovic told versus unknown Ukrainian quantity Rostyslav Arkhypenko in the night’s final Heavyweight (91+kg) clash. Hrgovic was dominant throughout with his jab doing most of the damage as Astana Arlans Kazakhstan came away from Ukraine with a 3:2 overall victory.

Astana Arlans Kazakhstan will be high on confidence when they welcome USA Knockouts next weekend Friday 23 November at the Daulet Sports Complex. That same evening, it is German Eagles away for Ukraine Otamans with the Kuppelsaal Congress Centrum the venue for this intriguing match-up. —- WSB