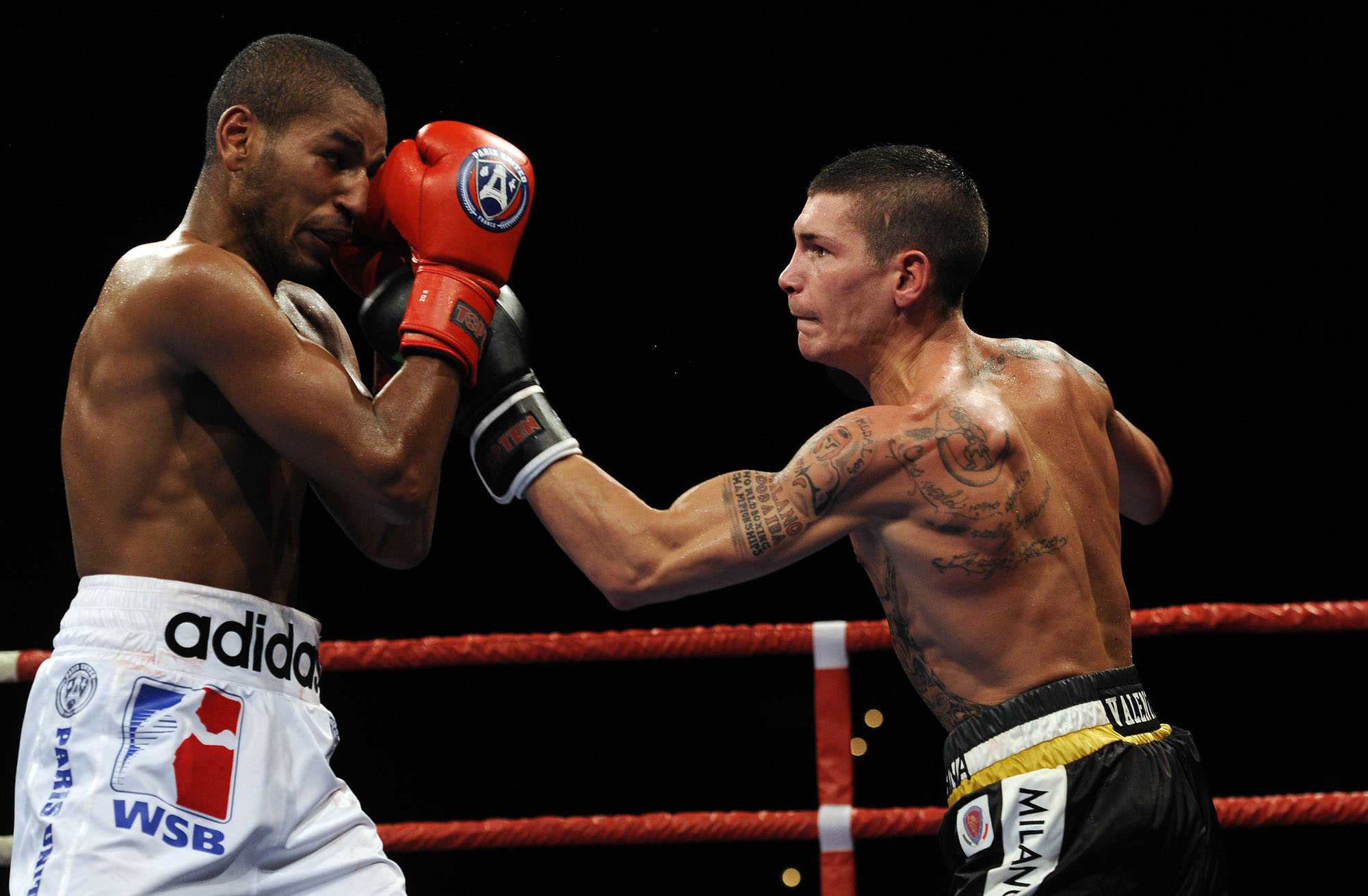 Lausanne, Switzerland, March 23, 2012: Astana defeat, Spectacle of the highest order as Astana Arlans and Dynamo Moscow battled it out in this captivating World Series of Boxing semi-final first leg (3:2). With the ‘Daulet’ Sports Complex in the heart of the Kazak capital packed to the rafters, there was an incredible atmosphere greeting both teams. These two Eastern rivals put on a real show with five electrifying bouts.

The intriguing Bantamweight match-up between the experienced Mirzhan Rakhimzhanovof Astana Arlans and the 21-year-old Russian orthodox rising star Vladimir Nikitin lived up to its billing. With so much riding on this, there were some tentative early exchanges but as soon as Rakhimzhanov connected with the first clean punch, the crowd erupted and both boxers sparked into life. Fast and furious, it was anyone’s fight. There was barely anything to choose between the two but Dynamo Moscow’s Nikitin seemed to be doing the most damage and in the end it was the more positive and calculating Nikitin who prevailed following some excellent combination punches. What a start it was to this match with Moscow now with the early advantage in the tie.

Kazak heavy-hitter Merey Akshalov was now charged with dragging Astana back on level terms against one of WSB most accomplished Lightweight boxers, 27-year-old Belarusian southpaw Vazgen Safaryants. One of the headline fights of the evening with both boxers such quality technicians. These two extremely gifted fighters treated the fans to five rounds of sumptuous boxing. Akshalov came out of the blocks, firing on all cylinders, throwing punches from all angles as he took the first round in impressive style. Clearly buoyed by the crowd, the Kazak orthodox fighter continued his assault in the second round, much to the dismay of his opponent. The third was a real cracker with so many punches being thrown, but this time Safaryants subtle movement and compact style gave him the edge. With the Moscow southpaw now in the ascendancy, he looked to take the fight to his rival but his wild approach left him exposed as Akshalov landed some precise punches, one in particular almost sent Safaryants to the canvas. Unfortunately there could only be one winner in this contest. The speed and poise of the 23-year-old Akshalov was too much as he inflicted a first career WSB defeat on Safaryants.

With the match now delicately poised at 1:1, Astana Arlans’ 21-year-old prospect Miras Bairkhanov faced Vitali Bandarenka in the Middleweight contest. Even though the fighters were bigger, there was no drop in the intensity levels with both boxers going for it. Once again, two evenly matched rivals were going toe-to-toe with nothing to choose between them. Bairkhanov had to deal with a severely cut left brow from the fourth round but continued to look for the win. Undaunted by a seemingly bigger opponent, Bairkhanov just shaded the final round to take the overall victory and give his team the advantage in this pulsating semi-final first leg.

The Russian orthodox fighter, Danil Shved, once again locked horns with Astana Arlans’ Uzbek Ramzjon Ahmedov in the Light Heavyweight contest. We saw a repeat of the action in week 9. Shved has been immense so far and started the season brightly. However, his opponent has confirmed in the quarter-finals that he is one to keep an eye on, beating the Swedish Guerreros Kennedy Katende. Although the Arlans fighter lost the second round unanimously, he dominated the following two and started the final one with a clear and strong advantage. That was enough for him to take control of the last three minutes of the bout and inflict his first defeat on Shved in four WSB matches.

Leading 3:1 already, the Kazakh went into the Heavyweight bout with maximum confidence and with a possibility to secure an interesting margin before going to Moscow next week. But having to go all for it in front of a defensive and 10 cm taller Sergey Kalchugin, local starRuslan Myrsatayev was trapped in a body-to-body contest. Behind the scoreboard all the way, the Arlans even received a warning in the third round and in the end lost the bout 45:49, 47:47, 46:48. This was enough to keep the Russians happy, with a close overall defeat (3:2).

These two teams meet again next week in the return leg, but who will be victorious in the final chapter of this exciting saga?

Lausanne, Switzerland, 24 March 2012 -This was a mouth-watering tie with two of the most exciting teams looking to take a major step towards progression to the WSB Team Finals in the first leg of this fixture. Both camps were in confident mood in the build-up to Saturday’s action with the classy home team Dolce & Gabbana Milano Thunder having declared that they would adopt a no-fear approach against the irrepressible Baku Fires. It was some spectacle when these two locked horns but Milano will have surprised everyone with the character of this first showing at the Mediolanum Forum.

In the first encounter of the evening, top ranked Bantamweight Gairbek Germakhanov of Baku Fires represented one of the toughest tests of Vincenzo Picardi WSB career, but with home advantage, this was the opportunity for the Italian 27-year-old to shine. The experienced Picardi was clearly buoyed by the partisan crowd chanting his name as he used his height and reach advantage to gain the upper hand in the first round. It was an all action display by both fighters in the second with the explosive Germakhanov just edging it. The fans were being treated to a fight of the highest calibre with two explosive fighters going for it. Midway through the third, Picardi connected with a hard right that cut the Azeri’s left brow. The gash was so severe that the ringside doctor could not stem the bleeding and the fight unfortunately had to be stopped. With Picardi ahead on the judges’ scorecards, the Italian orthodox fighter was awarded the win to the delight of the home crowd.

With Milano Thunder now with the early advantage, it was as predicted a fascinating Lightweight contest as Branimir Stankovic proved his pedigree with a sumptuous display against 27-year-old Baku Fires Tajik Madadi Nagzibekov. Stankovic looked so motivated right from the off, very positive in his approach, unafraid of throwing the big punches. Boxing at close-quarters, it was a fight of pure passion by Stankovic, who was mixing his shots to great effect as he worked the body of his opponent, throwing punches from all angles. Starting to feel the effect after four intense rounds, Stankovic then switched to using the jab to great effect as he won the bout to record his first WSB career victory. The young Serb delighted his corner and the rest of his team with a performance of the highest standard as Milano doubled their advantage in the match.

In the Middleweight contest, undefeated Irishman William McLaughlin of the Dolce & Gabbana Milano Thunder was surprised by his opponent Osman Aliyev’s bright start. The Azeri debutant was throwing a lot of punches, with several connecting to his rival’s body. The man from Ireland though was standing strong, his high guard soaking up those punches. McLaughlin then slowly started asserting his authority to dictate from the centre of the canvas and although he managed to connect with some solid left hooks, Aliyev’s positive opening saw him take the first round. The Azeri continued to look sharp, evading McLaughlin’s attacks and hitting him with some exquisite counter punches as he took the second round in similar fashion. The 26-year-old orthodox Milano fighter changed tactic in the third to great effect, as he hounded down his fast moving opponent, going toe-to-toe with him and throwing some hard combination punches. The crowd was really enjoying this one as McLaughlin was giving his all against the accomplished Aliyev. The Irishman’s endeavour saw him take the third. After that, McLaughlin continued to unleash an array of punches though with Aliyev putting up a brave resistance and not allowing his rival to dominate. This was a pulsating fight with the Milano man doing enough to claw himself back on level terms with one round to go. With the fans boisterous, McLaughlin found the reserves to unleash several flurries of punches as he emphatically finished the final round by rocking his opponent to win the contest. As the final bell went, the Irishman knew he had won it as he celebrated wildly, punching the air and hugging his coach. He had battled from the brink to win; it was simply an irresistible performance. Milano were now 3-0 up on the night.

With the spectators now cheering loudly, Imre Szello entered the ring for the Light Heavyweight contest. He used a measured approach against the young up-and-coming Baku Fires 19-year-old southpaw Vatan Huseynli to great effect. This tactic was spot on for the 28-year-old, as he kept his opponent at bay with the clever use of his jab to take the first round. Although Huseynli was very positive in the early stages, he was a bit wild and the experienced Szello showcased excellent technique to notch up the next two rounds. The young Azeri was now running out of ideas and could not find a way past Szello’s solid defences. Szello was now picking his spots and his rival apart as he turned on the pressure by alternating punches between the head and the body to devastating effect. The bout was now turning into an exhibition by the Hungarian icon. Throwing a repertoire of shots with some penetrating combinations, Szello looked like he could go on forever; he was really enjoying himself out there. Milano Head Coach, Francesco Damiani, was all smiles by the end, recognising the quality of Szello’s performance as he stormed to a resounding victory.

With his unbeaten record on the line, WSB Heavyweight World Champion Clemente Russokept his distance from the taller Azeri southpaw Haji Murtuzaliyev in the opening exchanges of the final contest. It was once again a tactical fight from the 29-year-old Italian, who is one of the quickest Heavyweights you will see in this competition, as he threw some hard overheads into his opponents face before quickly retreating. The game-plan was working to perfection and although not easy on the eye, this strategy was paying dividends. In the third round, Russo’s confidence seemed sky-high as he went into showboating mode, shuffling and looking the other way before throwing some hard connecting shots. That overhead left continued to do the damage and had the Azeri on the back foot. Murtuzaliyev was having a go but could not get to grips with the Italian, he threw quite a few punches but Russo’s movement was excellent. The fifth and final round was a scrappy affair but Russo knew he had the win in the bag as he raised his fist when he connected with another hard left. When the final bell rang, Russo’s arms pointed to the sky. There were high-fives aplenty when the superstar made his way through the crowd as the spectators enjoyed a sensational overall 5:0 win.

This monumental victory now sees Dolce & Gabbana Milano Thunder within touching distance of the WSB Finals on the 2 May at the ExCeL in London. All they need now is to win one of their five fights in Baku to guarantee passage. However one thing is for sure, Baku Fires will be pumped for that one and will be going all out for the win in front of their home fans. Can the Azeri outfit battle back from this deficit and force a sudden death bout. Tune in next weekend for more thrilling WSB semi-final action in the return leg.