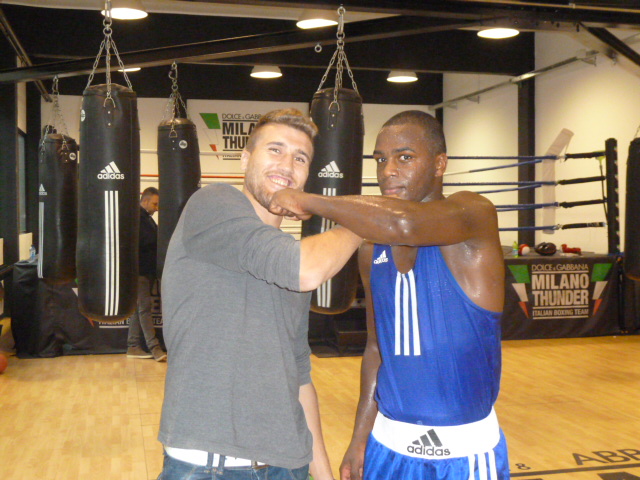 Lausanne, Switzerland, Oct 18, 2012: With the close season throwing up some exciting news already, World Series of Boxing (WSB) has just learnt of several sensational transfers going to the reigning WSB Team Champions. Kept carefully under wraps, Dolce & Gabbana Italia Thunder have now announced that 2011 WSB World Champion, 2008 Olympian and Algeria flag bearer at the London 2012 Olympic Games Abdelhafid Benchabla will be added to their ranks. The team was further bolstered by the acquisition of the entertaining Filipino Charly Suarez, the accomplished Frenchman Michel Tavares as well as some other very interesting signings to complement the already impressive set-up.

Whilst other teams have been busy recruiting and adding quality to their squads, many thought that the WSB title holders had been quiet. Today’s announcement however reinstates the glamorous Italian Franchise as early season favourites.

Benchabla was delighted to join up with his new teammates, declaring, “I am happy to be here. I was the Individual Champion in Season I, however the big prize in WSB is the Team Trophy. With Dolce & Gabbana Italia Thunder I am in the best position to win it”. One of the outstanding talents in the competition, the Algerian’s statement made his intentions perfectly clear. His addition to the roster will surely give the Italian team that extra edge. The speedy Light Heavyweight orthodox was the star boxer for the Astana Arlans last season and has shown his class throughout the two seasons he has competed in WSB. He is definitely a pure breed boxer will plenty of panache, boasting an 11-2 record in the competition as well as having accumulated several international trophies in a distinguished Olympic boxing career.

The backbone of the team will be made up of Italians, with the confirmation of the London Olympians in the squad: Team Captain Clemente Russo, Vincenzo Picardi, Jahyn Vittorio Parrinello, Domenico Valentino and the big revelation in the British capital after his bronze medal, Vincenzo Mangiacapre, are all ready to lead the troops into battle.

Reinforcement continued with the acquisition of Middleweight sensation Michel Tavares from Paris United. The 23-year-old French southpaw with the devastating left hook was integral to his team’s success in the first season and has an impressive 9-2 record. Fledgling Heavyweight talent Tony Yoka is also scheduled to take part, the Youth Olympic Games gold medallist will be linking up with Tavares and the rest of the Italian squad later this month.

The exotic touch this year comes from the Philippines in the shape of Charly Suarez, the 24-year-old was one of the surprise packages last season and has also joined the group. The speedy Filipino quickly became a fan favourite last season with his explosive style and he is sure to win many more admirers when he takes to the ring for his new team.

There was also confirmation that dynamic duo Imre Szello and Branimir Stankovic would once again be on the roster. Stankovic in particular impressed in the latter part of the previous campaign, setting the team up for a memorable night with his win during the WSB Team Final. 21-year-old southpaw Bojan Miskovic was picked up during the draft last month after making his mark with the Mexico Guerreros last season.

With WSB now allowing pro boxers with less than 15 bouts on their record to compete, Dolce & Gabbana Italia Thunder have enrolled the services of Daniele Lemon and the Italian 200cm tall Heavyweight Champion Matteo Modugno.

Most of the boxers have now begun training in order to get into top shape for the new season in which the Italian team has to defend its title. Drawn in the tough Group B, it will not be easy but with an ultra professional set-up and with the experience of two solid campaigns, expect the Dolce & Gabbana Italia Thunder to be challenging for honours come the business end of the season. —- WSB