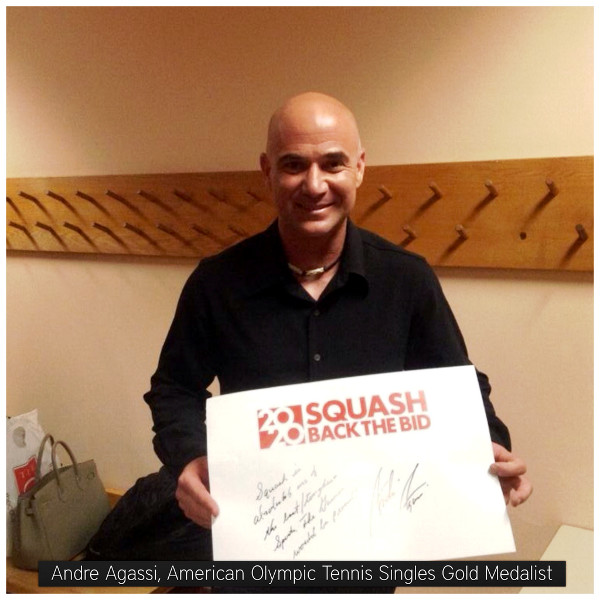 “Squash is absolutely one of the best/toughest sports,” said Agassi, the eight-time Grand Slam champion and Olympic gold medallist in 1996. “The Games would be proud!”

Federer was one of the first leading tennis players to pledge support for his fellow racket sport: “I think it’s a wonderful sport. It’s unfortunate some sports don’t get the opportunity to be in the Olympics – I think squash would deserve it.”

Since then, fellow stars Agassi, Clijsters and Edberg have also given Squash their backing.

“I think Squash would be a great addition to the Olympic Games,” said Clijsters, one of the greatest ever players in the women’s game who won 41 WTA singles titles including four Grand Slams. “It’s a great competitive game and different from the other racket sports in not having a net dividing the players.

“It shows great intensity. With the modernisation of the game I think it deserves a place in the Olympic Games.”

Edberg first started playing squash when he was on the ATP Tour and used to play in the top Swedish league: “Squash has all the credentials to be an Olympic sport – it would complement the other racket sports that are already part of the programme and it would be great to see it included in the Games,” said the former world number one and Olympic gold medallist.

World Squash Federation President N Ramachandran is delighted by the growing list of world top athletes who are backing the sport’s bid for inclusion in the 2020 Olympic Games programme.

“It is heart-warming to have tennis idols like Agassi, Federer, Edberg and Clijsters supporting Squash’s campaign – and equally gratifying to see top athletes from sports like rugby, cricket, football, cycling, badminton, weightlifting, diving and shooting rallying to our cause.” —- WSF