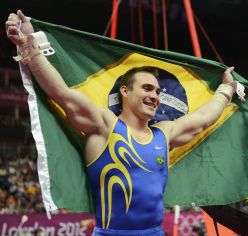 Lausanne, Feb 28, 2013: The Brazilian Gymnastics Confederation (CBG) informed that London 2012 Olympic Champion on Rings Arthur Zanetti (BRA) was elected to the Athletes’ Commission of the Brazilian Olympic Committee (BOC) by its Executive Board.

Zanetti was sworn in and took office in his new role on Tuesday in Rio de Janeiro, host of the 2016 Olympic Games. While Zanetti is one of four elected commission members, the panel also includes fourteen Brazilian athletes, who were chosen by the participants of the latest two editions of the Olympic Games via online voting.

According to Zanetti, the commission will be very important to him and to CBG: “Being part of the COB Athletes Commission will be an enriching experience. It is great to be in direct contact, to participate in discussions and to share my opinion. I believe this position will also be significant to the confederation, which will have a representative on the commission. I am happy to be among those chosen,” he said.

FIG Athletes’ Commission President Jani Tanskanen (FIN) is also excited about Zanetti’s election: “This is great news! I want to warmly congratulate Arthur on his election. The role and meaning of Athletes’ Commissions are growing everywhere, and in the case of the Athletes’ Commission for the host country of the next Olympic Games. I think this nomination is very important, indeed. I am looking forward to meeting with Arthur in the future and to sharing some thoughts and ideas about our commissions’ work with him,” said Tanskanen.

The BOC Athletes’ Commission’s objectives are:

• To be the main communications channel between athletes and the COB;

• To establish a discussion environment where both sides can share information and ideas related to the Olympic, Pan American and South American Games;

• To offer suggestions and recommendations on any matter related the Olympic Movement;

• To analyze the adoption of the best models, techniques and standards for the development of Brazilian athletes, with regards to the rights and interests of Olympic athletes and to make recommendations in this matter;

To encourage the participation of women in sport, and to support the development of education for young people through sport. —- FIG