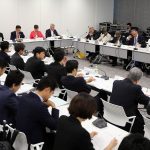 From projects to engage the whole of Japan for the next three years to an exciting new gender-balanced, youth and urban Olympic programme, the Olympic Games Tokyo 2020 will deliver a unique experience to athletes and fans of all ages (Tokyo 2020 unique Games experience).

The Olympic Games Tokyo 2020 will not only inspire the world during 16 days of competition but will bring new audiences to the Games and their values in the lead-up”, said IOC Coordination Commission Chair John Coates.

“With the support of Tokyo 2020, we recently added 15 events to the Olympic programme, delivering greater gender equality and more of an urban and youth focus, while reducing the overall number of participants.

Our discussions this week have highlighted several ways in which this significant step forward will benefit the athletes and allow Tokyo to involve people who might not necessarily have been interested in the Games before.

The ongoing work on an urban feel in the waterfront zone, pre-Games engagement activities, and Tokyo 2020’s athletes first focus means that we leave Tokyo excited about what the future holds for these Olympic Games.”

During the IOC’s three-day visit, the Tokyo 2020 Organising Committee emphasised various ways that Japanese residents can play a role in the Games’ preparations.

These include, amongst other initiatives, encouraging people to donate their old electronic devices, so that they can be a part of creating an Olympic or Paralympic medal, and participating in Tokyo 2020’s upcoming nationwide flag tour.

During its visit, the Coordination Commission visited a number of venues, which included a stop at the Aomi Sports Cluster.

There, the Commission members were greeted by sport climbing, skateboarding, and Paralympic Football 5-a-side athletes hoping to compete in Tokyo 2020, who expressed their excitement at being a part of the Games in this innovative downtown venue.

“It was my first visit to the venue site for the Olympic Games Tokyo 2020,” said Akiyo Noguchi, who is an IFSC Climbing World Championship bronze medallist in bouldering. “Today’s visit made me feel that this is becoming a reality, and I am now totally determined. I would love to climb the wall right here three years from now.”

“I have never taken part in a skateboarding contest in a venue this size – the audiences are going to be huge,” said 15 year-old Nishimura. “I think it will be a good opportunity to show everyone what kind of sport skateboarding is. I am looking forward to it.”

“We had very productive discussions at the Coordination Commission meetings this week,” said Yoshiro Mori, President of the Tokyo Organising Committee. “I’d like to express my deepest gratitude to the members of the Commission for their valuable advice.

The young rising athletes who came to meet us on Wednesday at the Aomi Sports Cluster, where their sports events will take place in three years, told us with such excitement about their dreams and expectations for Tokyo 2020. It reminded me of all the other young athletes around the world who are working very hard towards their dreams.

I felt once again the importance of my responsibility to them. We will continue to strive to deliver successful Olympic Games, and display the value of sports to the world.”

During its visit, the Coordination Commission visited the Olympic Village, where its members were briefed on the uniquely Japanese experience that the athletes will receive in 2020, and were given legacy, sustainability and construction updates for the National Stadium and the Olympic Aquatics Centre.

Although the 72,400 square-metre National Stadium is Tokyo 2020’s largest competition venue construction project, planning and construction have proceeded on budget, and it is set to meet its target completion date of November 2019. The stadium project is expected to have 3,000 workers on site at the height of construction.

Tokyo 2020 has been able to benefit significantly from the recommendations of Olympic Agenda 2020.

This is reflected not only in the modernisation of the Olympic programme, but also in the ability to help it to invest as efficiently as possible in the organisation of the Games, such as the approximately USD 2.2 billion of savings from the revised construction budget.

Throughout the meetings, the Coordination Commission was pleased to hear Tokyo 2020, the Tokyo Metropolitan Government and Japanese National Government continue to underline their commitment to work with the IOC to further identify cost-saving measures.

“Planning is going extremely well; it is exceptionally detailed and precise; and Tokyo’s commercial programme is remarkable,” Coates said. “We do not have any concerns about this. We continue to work with the Organising Committee, led by President Mori, and all of the local stakeholders to ensure that the Games are a force for good.

We encourage our Japanese friends to engage with young people and inspire their citizens, while also identifying additional efficiencies to reduce the overall Games budget.”

The Commission also discussed a number of other areas of Games preparations, including the services to athletes, National Olympic Committees, International Federations, the media and spectators; marketing; and the Paralympic Games. —- IOC/Photo: TOKYO 2020/SHUGO TAKEMI