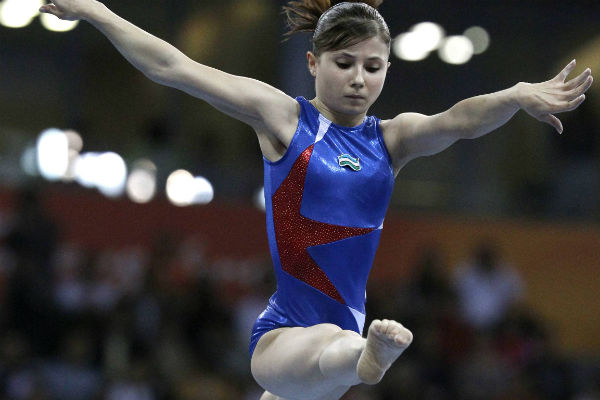 II. Upon receipt of the results of the B Sample analysis, a final decision will be pronounced by the Disciplinary Commission.

III. The International Gymnastics Federation, the NOC of Uzbekistan and LOCOG shall ensure the full implementation of this decision

IV. This decision shall enter into force immediately.

IOC DISCIPLINARY COMMISSION DECISION OF PROVISIONAL SUSPENSION REGARDING MRS LUIZA GALIULINA BORN ON 23 JUNE 1992, ATHLETE, UZBEKISTAN, GYMNASTICS ARTISTIC.
1. Mrs Luiza Galiulina (hereinafter the “Athlete”) was accredited as a participant in the Games of the XXX Olympiad in London in 2012. She received accreditation number 1067281-02, which was validated on 24 July 2012.
2. The Athlete was requested on 25 July 2012, in London, at around 2.00 p.m., to provide a urine sample for a doping control.
3. Pursuant to Article 6.2.1 of the IOC Anti-Doping Rules Applicable to the Games of the XXX Olympiad, London 2012 (the “Rules”), Dr Patrick Schamasch (the “IOC Medical Director”), as representative of the Chairman of the IOC Medical Commission, was informed at approximately 07:30 a.m. on 28 July 2012, by the Head of the WADA Accredited Laboratory in Harlow, of an adverse analytical finding on the A sample of the above-noted urine.
4. Pursuant to Article 6.2.2 of the Rules, the IOC Medical Director determined that the abovenoted A sample belonged to the Athlete, and verified that it did in fact give rise to an adverse analytical finding. He also determined that there was no apparent departure from the International Standards for Testing or the International Standards for Laboratories that undermined the validity of the adverse analytical finding.
5. Pursuant to Article 6.2.3 of the Rules, the IOC Medical Director immediately informed the IOC President, Dr Jacques Rogge, of the existence of the adverse analytical finding and the essential details available to him concerning the case.
6. Pursuant to Article 6.2.5 of the Rules, the IOC President, by letter dated 28 July 2012, promptly set up a Disciplinary Commission, consisting of:

The IOC President also informed the Disciplinary Commission that, pursuant to Rule 59.2.4 of the Olympic Charter and Article 6.1.6. of the Rules, the decision of the Disciplinary Commission in this case would constitute the decision of the IOC.
The IOC President has in this case decided that the procedure may be extended beyond the 24 hour time limit as per Article 6.2.14 of the Rules.
7. The analytical report of the laboratory analysis of the A sample, issued by the WADA Accredited Laboratory in Harlow and attached to the above-mentioned letter dated 28 July 2012, indicated the presence of the prohibited substance furosemide, which is a diuretic, prohibited under S.5 of the Prohibited List and is a Specified Substance.
8. The Athlete is due to compete on Sunday 29 July 2012 at 16h30.
9. Instead of simply taking a provisional suspension preventing the Athlete from competing the following day on the basis of the adverse analytical finding of the A sample pursuant to Article 6.2.8 of the Rules, the Disciplinary Commission decided to take all possible steps to help protect the interests of the Athlete and to provide the Athlete with an opportunity to be heard in relation to such adverse analytical finding on that same day, namely, Saturday evening at
10.00 p.m.
10. Pursuant to Article 6.2.6 of the Rules, by letter dated 28 July 2012 notified to the Athlete, to the Chef de Mission of the NOC of Uzbekistan, Jasur Akramov, to the Fédération International de Gymnastique and to the Head of the Independent Observers’ Programme, the IOC President advised them of the above-mentioned adverse analytical finding and of the time, date and place of the hearing of the Disciplinary Commission regarding this case.
11. The Disciplinary Commission held a hearing on 28 July 2012 starting at around 10:00 p.m. in the IOC Executive Board Meeting Room in the Hilton Hotel on Park Lane, in the presence of a delegation of the NOC of Uzbekistan (hereinafter the “Delegation”) comprised of:
Luiza Galiulina, Athlete Filippova Gyozal, coach, Secretary General of the National Gymnastics Federation of Uzbekistan
Andrei Nilov, personal coach of the Athlete Ruslan Mustaev, Vice-President of the National Gymnastics Federation of Uzbekistan Bakhodir Khusankhodjaev, Deputy Chef de Mission
12. The Fédération Internationale de Gymnastique (hereinafter “FIG”) did not send a representative to the hearing.
13. Attending the hearing were:
Dr Patrick Schamasch, IOC Medical Director Howard Stupp, IOC Director of Legal Affairs Christian Thill, IOC Doping Control Administrative Coordinator Soheyla Behnam and Susan Greinig, Assistants Kate O’Neill, Minute-taker
René Bouchard, Head of the Independent Observers’ Programme.
14. At the beginning of the hearing, the Delegation was informed that the meeting was being recorded and that minutes were being taken. The Delegation was also informed of the results of the laboratory analysis of the A sample which, according to the analysis report prepared by the Head of the WADA Accredited Laboratory, indicated the presence of the prohibited substance Furosemide.
15. At the beginning of the hearing, the Delegation declared that they were fully aware of the World Anti-Doping Code and the Rules. Upon questioning from the Chairman of the Disciplinary Commission, the Delegation confirmed that it did not have any objection as to the conduct of this disciplinary procedure.

16. In summary, the Athlete explained that

– She did not know how the prohibited substance entered into her body;
– However, she explained that she had been treated by her mother when she was sick at home, during two weeks at the end of June 2012;
– She also indicated that she had taken medication for a heart condition, the last time being before arriving in London, on 22 or 23 July 2012;
– She also confirmed having taken numerous other products and natural herbs, to help her sleep and relax; and
– The athlete declared she did not take Furosemide, but that she knew what it was and its effects.
17. Notwithstanding the various explanations and declarations provided by the Athlete and the Delegation, there was no corroborating evidence in addition to this. Therefore, the Disciplinary Commission is not comfortably satisfied, as required under Article 10.4 of the World AntiDoping Code, of the absence of an intent to enhance sport performance or mask the use of a performance-enhancing substance.
18. Shortly after the hearing, the Athlete requested the opening and analysis of the B sample, which will take place on Sunday 29 July 2012 at 2:00 p.m but stated that she would not attend nor send a representative. A final decision will be made in this case by the Disciplinary Commission once the result of the B sample is known.
19. The Disciplinary Commission, considering the circumstances, the arguments referred to in paragraphs 16 and 17 above, and taking into consideration the principle of strict liability, applying Article 1.2 of the Rules and Article 10.4 of the World Anti-Doping Code, is of the opinion that the Athlete should be provisionally suspended.

II. Upon receipt of the results of the B Sample analysis, a final decision will be pronounced by the Disciplinary Commission.
III. The Fédération Internationale de Gymnastique, the NOC of Uzbekistan and LOCOG shall ensure full implementation of this decision

Under the IOC Anti-Doping Rules applicable to the 2012 London Olympic Games, testing takes place under the IOC’s auspices from 16 July (date of the opening of the Olympic Village) to 12 August 2012. Within that period, the IOC systematically performs tests before and after events. After each event, the IOC systematically carries out tests on the top five finishers plus two at random. The IOC also performs out-of-competition unannounced tests. Over the course of the London Games, the IOC is expected to carry out some 5,000 tests – 3,800 urine and 1,200 blood. —- IOC