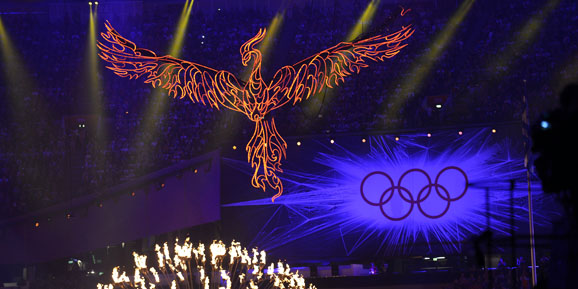 London – GBR, August 14, 2012: Pageant, There was music, there were lights and there were doubtless tears in a few eyes as the London Olympics ended on a night of celebration on Sunday.

The Olympic Stadium that had served as a field of dreams for the past fortnight became a stage for ‘A Symphony of British Music’ as the closing ceremony offered up some of the great and good of British pop from the past 50 years.

It was a cultural pageant that concluded with Jacques Rogge, president of the IOC, hailing “these happy and glorious Games” while Sebastian Coe, the chairman of London 2012, declared: “Today sees the closing of wonderful Games in a wonderful city. We lit the flame and lit up the world.”

With 10,000 athletes and 80,000 spectators filling the Olympic Stadium, it shone bright for one last night as the closing celebrations began with a tribute to the British street party featuring performances from Madness, Pet Shop Boys and One Direction – setting the tone for what was to follow.

Beside a mock-up of London landmarks including Big Ben, St Paul’s Cathedral and Battersea Power Station, Ray Davies of The Kinks sang his classic love song to the British capital, Waterloo Sunset, prior to the parade of the athletes, the true stars of the Games whose entry included a conga from the Jamaican contingent.

Fittingly the athletes were corralled into triangles as the centre of the stadium took the form of the Union Flag, while all around a spectacular show of sound and light unfolded.

Stars of different eras all played their part – including Queen, George Michael, Take That, Emeli Sande and Jessie J. Elbow sang the rousing ‘One Day Like This’ as the athletes flooded into the arena while Muse performed their Olympic anthem ‘Survival’.

The reformed Spice Girls appeared atop moving London cabs and there was even a taste of classic British comedy with Monty Python’s Eric Idle singing Always Look On The Bright Side of Life and an appearance of the yellow Reliant Robin car from the BBC series Only Fools and Horses.

There were moving John Lennon and Freddie Mercury tributes and the stadium itself, seats aglow with a plethora of colours and patterns, shone as brightly as any act, providing an unforgettably luminous backdrop.

From the world of Acrobatic Gymnastics, there was also a performance from Spelbound, the group – featuring former World and European Champions – who achieved national prominence in the UK by winning the Britain’s Got Talent TV show in 2010.

As the night drew on, the focus turned to the 2016 Games in Rio de Janeiro as Boris Johnson, mayor of London, passed the Olympic flag to Eduardo Paes, his Rio counterpart. This was the cue was for a show of Brazilian music and dance that even included an appearance from Brazil’s most famous footballer of all time, Pele.

Finally came the extinguishing of the Olympic flame to the strains of the poignant ‘Dances With Wolves’ theme by British composer John Barry, before the party came to a close with music from The Who, who sang ‘My Generation’. A fitting end to a wonderful Olympics which did everything it could to inspire the next generation. —- FIG