Home  »  OLYMPIC   »   British cheers but mixed emotions for US 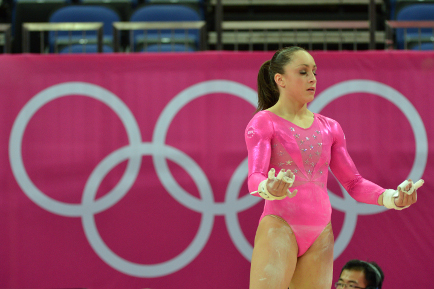 London – (GBR), July 30, 2012: mixed emotions, There were tears and cheers in the USA camp as Sunday’s Women’s Artistic Gymnastic qualification round threw up a major upset.

USA’s success in finishing first in qualifying for the Team final was tempered by reigning world champion Jordyn Wieber’s failure to reach the All-Around final after being outscored by colleagues Alex Raisman and Gabby Douglas.

Raisman, who finished second only to Victoria Komova, said: “I feel really bad knowing how much she [Wieber] wanted it but really happy I made it. The first thing I said to her was that I felt really bad for her. I had no idea that I was in the position to outscore her, I was completely focusing on my exercises and not on the scores.”

Wieber’s score of 60.032 left her in fourth place and unable to advance owning to the two gymnasts-per-country rule. “It is a bit of a disappointment,” said the 17-year-old before leaving North Greenwich Arena in tears. “It has always been a dream of mine to compete in the all-round final of the Olympics but I’m proud of Ally and Gabby and happy that they reached the all-round and that I was able to help the team get to the finals.”

USA coach John Geddert underlined the scale of the upset when he said: “I’m basically devastated for her. She has trained her entire life for this day and to have it turn out anything less than she deserves is going to be devastating.”

There were also mixed feelings in the China camp after the holders advanced in third place, behind Russia. He Kexin, who qualified second behind Beth Tweddle in uneven bars, noted that the difficulty scores for the Chinese were often lower than others – for instance, the United States counted three vaulters with 6.5 difficulty each, while China had none.

“I still think we are confident about over overall performance although we were a little bit lower than others in the difficulty,” admitted He.

There were also concerns over Yao Jinnan, who fell on Vault. “She is not so confident about herself because she had some injuries before the Games,” said He, “but we are comforting her a lot and we trust her – it’s not a problem. Everyone has ups and downs, this happens in the Games and is what makes them so exciting. We trust in her for the final, it won’t be a problem for the team. If we all put in the effort we can make it no matter what the individual performances.”

The other qualifiers, in descending order, were Romania in fourth, then Great Britain, Japan, Italy and Canada.

Home favourite Beth Tweddle, who scored 16.133 for a stunning performance on Uneven Bars, preferred to focus on the “amazing” team effort by the British women once they had shrugged off a nervy start.

She said: “The beam was a bit wobbly but once we got that over and done with they just performed to the max. Floor was better and vault was even better – Hannah [Whelan] went out and got a double [somersault] which she’s never done before. Our bars’ team total was the best we’ve ever recorded.”

Tweddle also praised the mature performance of 15-year-old Rebecca Tunney, the British Olympic squad’s youngest athlete, who was 15th in the All-Around qualification. “Rebecca is just 15 years of age and she has walked into an arena of I don’t know how many thousands, and she knew the pressure was on.”

As for her own performance on the Uneven Bars, Tweddle – bidding to end her career with an Olympic medal – added: “I would have walked way very disappointed if I’d not made the final – at least I’ve got the final to finish my career off.” —- FIG