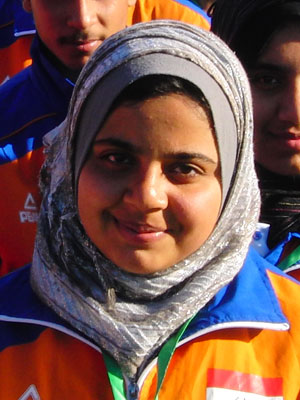 Lausanne (SUI), July 03, 2012: Iraqi woman archer, A female athlete from Iraq will compete in the archery event of the 2012 London Olympic Games. She obtained the Minimum Qualification Score just by the deadline.

On 1 May 2012 Iraq had been selected by the Tripartite Commission to receive an Invitation Place for the women’s archery event of the London 2012 Olympic Games. Rand Saad AL-MASHHADANI was proposed to be selected on this spot, but it was under the condition that she reached the following Minimum Qualification Score (MQS) by 1 July 2012, namely 1230 points in a FITA Round or 600 points in a 70m Round.

To take up this challenge she moved with her family to the World Archery Accredited Partner Archery Centre of Bangkok on 15 May 2012 where she was trained daily by Coach KIM Sun Bin. Her progress was fast and regular, and as a consequence she reached the MQS on 24 June in a 70m Round with 619 points; hence she became fully eligible to enter the archery event of the 2012 Olympic Games.

Born on 11 August 1994, Rand Saad AL-MASHHADANI may be the youngest competitor on the London shooting line. Her first individual international good result was a bronze medal at the South African National Championships on 27 March 2008 in Durban, when she was only 13 years old! Since this achievement she won another bronze medal (team) at the 2nd Asian Grand Prix Tournament in Tehran (IRI) on 19 May 2009 where she also finished 10th individually. Last year at the 17th Asian Archery Championships (and Asian Olympic Qualifier) in Tehran she finished 17th in the individual competition and 9th in the team event.

Now that the last qualifying tournament has been shot in Ogden in late June, the 128 places (64 men, 64 women) for archery have been allocated to the countries. On 1 July, 51 men and 52 women have been announced by their national archery federations or associations. Some of them still need the final approval by their National Olympic Committees (NOCs)—and so will the athletes that are still to be announced. The final deadline for the NOCs to give decision is 9 July.

Eleven of these qualified athletes, including Rand Saad AL-MASHHADANI, are currently supported by the Olympic Solidarity, and their number may increase by 9 July. —- WA