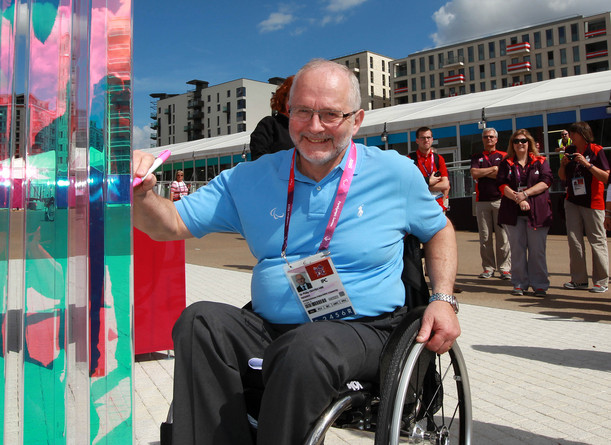 London – GBR, August 28, 2012: International Paralympic Committee (IPC) President Sir Philip Craven unveiled the Paralympic Wall on Tuesday 28 August. The wall, which is in the London 2012 in the Paralympic Village, commemorates the United Nations (UN) Convention on the Rights for Persons with Disabilities which was signed in New York. It was agreed and signed by 192 UN member nations.

Written on the wall are the opinions of school children on why Paralympic sport and its values are important to them. This was a part of LOCOG’s Get Set education programme that aims to encourage and inspire school children to take up sport through various activities and competitions.

Sir Philip said: “Since 1960 the Paralympic Games have made extraordinary strides in helping to change the world’s perception of people with an impairment. We’ve also seen an extraordinary growth in the numbers of athletes and countries participating in the Games – in London we’re joined by 4,200 athletes from 166 countries.

“Our role was greatly helped six years ago when the UN Convention on Rights for Persons with Disabilities was agreed upon by the delegates of all 192 UN Member Nations. It recognised that persons with an impairment have the right to participate in sporting activities.

“The wall has lots of blank space which will give athletes, coaches and officials the opportunity to sign it, show their support for the principles of the UN Convention and highlight their commitment to promoting the Paralympic values to young people across society.”

The UN Convention on Rights for Persons with Disabilities featured 50 articles. Articles 4 through to 32 define the rights of people with disabilities and the obligations the state parties have towards them. These include accessibility, equality and non-discrimination, living independently, mobility and participation in cultural life, recreation, leisure and sport.

The London 2012 Paralympic Games, which open on Wednesday 29 August, are set to be the biggest ever where Paralympic athletes will compete in front of sold-out crowds and an estimated TV audience of around four billion. —- IPC/Picture © Jan Kruger