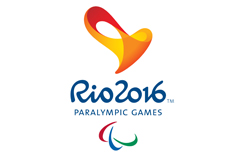 IPC, International Paralympic Committee News, Nov 27, 2011: The Rio 2016 Paralympic Games emblem was unveiled tonight (Saturday, November 26), at the Lagoa Rodrigo de Freitas, the lagoon that is one of Rio de Janeiro’s iconic landmarks and venue for the rowing and para-canoe events.

The launch took place before approximately 200,000 people that watched the lighting of the 16th Bradesco Seguros Christmas Tree, the third largest annual event in the city, after the Copacabana New Year’s Eve celebration and the Carnival.

“This is an emblem that conveys passion and transformation from the perspective of the Paralympic Movement and its values: courage, determination, inspiration and equality. An emblem that not only can be seen, but also experienced through the various senses, reaching out to a larger number of people, in the same spirit of inclusion we want for the Games”, said the president of the Rio 2016™ Organising Committee for the Olympic and Paralympic Games, Carlos Arthur Nuzman.

The International Paralympic Committee (IPC) recognised the breadth of this process, and also chose Tatil to develop the Paralympic emblem, as the agency was already immersed in the Rio 2016™ values, which ensured full integration between the visual identity of both the Olympic and the Paralympic Games.

The emblem was first displayed at the end of the three-minute official video exhibition on the big screen in the event’s main stage, facing the Rowing Stadium, and on other four big screens spread around Lagoa.

The audience was taken by surprise when, after the video presentation, and to a thrilling soundtrack, a huge sculpture of the brand, 4m tall, 3m wide and weighing 160kg, was lifted by an hydraulic platform next to the stage. A trail of fireworks was lit up from the platform towards the Christmas Tree, signaling its lighting.

“For me the emblem represents the heart of an athlete and as our athletes are the heart of the Paralympic Movement it is just perfect in highlighting what we are all about.

“Just like the great city of Rio, each time I look at the emblem I notice something new, no two views of it are the same. We talk a lot in the Paralympic Movement about spirit in motion and this pictures it perfectly.”

The emblem launch show started at 8pm, when actor Edson Celulari, the event’s master of ceremonies, got up on stage and announced the performance of dance company Nos da Dança. For approximately 10 minutes, the audience watched a performance in four acts, each one depicting a Paralympic sport: athletics, wheelchair basketball, sailing and wheelchair fencing.

Two of the show’s four lead dancers, who played Paralympic athletes, are wheelchair users and the third one is an amputee. The three dancers are members of the dance group at the disabled association of Rio’s neighbor city Niteroi and were especially selected for this performance. The only one among the lead dancers that had no disability was blindfolded to play a blind sprinter.

After the emblem launch show, guests and media were able to experience a 3D performance of the Rio 2016™ Paralympic Games emblem. A polyurethane sculpture that went through a long process of 3D printing was fitted with light sensors that activate its movement and sound when touched.

The idea of a 3D, multi sensory experience extends the experience promoted by the Rio 2016™ Olympic Games emblem, unveiled in December last year, during the New Year’s Eve celebration on Copacabana Beach, which was also presented in a 3D version as a live sculpture of light and movement.

Up until 2016, the sensory experience with the emblem’s sculpture will be taken across of Brazil in Rio 2016™ events, thus furthering the Games reach.