Home  »  OLYMPIC   »   Jumping gets off to a dramatic start at Greenwich 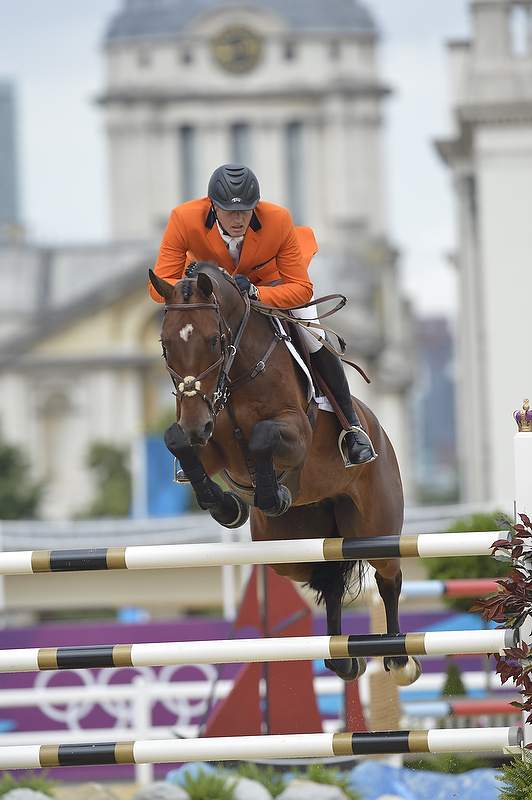 London – GBR, August 04, 2012: The first Jumping competition of the London 2012 Olympic Games at Greenwich Park threw up some big surprises today. Olympic course designer Bob Ellis’ track was expected to be a relatively gentle introduction for the Jumping riders, but two of the biggest stars of the game were amongst four to be eliminated.

A total of four nations completed on a zero score, and Sweden was amongst them despite elimination for Lisen Fredricson at the troublesome double at fence three where she took a heavy fall when landing in the middle of the opening triple bar. The Netherlands, Switzerland and Belgium also kept a clean sheet, while Brazil, France, Germany and the USA each collected just one time penalty to finish in equal-fifth ahead of Saudi Arabia, with three on the board, in ninth place.

Teams from 15 nations lined out, and the hosts from Great Britain slotted into equal-10th alongside Australia when a single error from Scott Brash had to be taken in account after Peter Charles also fell victim to the distance between the second and third fences. The Ukraine finished 12th, Canada 13th, Mexico 14th and Chile 15th. There were 32 clear rounds, eight horse-and-rider combinations picked up a single time fault and 11 completed the course with just one fence down. All teams go through to tomorrow’s first round of the team competition and the top 10 nations then qualify for Monday’s second round medal-decider.

The Greenwich Stadium was packed to capacity as the action got underway, and with seven foot-perfect rounds from the first nine riders it seemed that the observation made by German Chef d’Equipe, Otto Becker, was fairly accurate. “The course is right for a first qualifier, but since the level of riders is very high I expect it to be much more difficult tomorrow”, he said. It was vintage Bob Ellis, with lots of loops and roll-backs as it twisted and turned its way home.

Starting out over an oxer, there was a left-hand turn to a vertical at fence two and a bending line to the double at three. It was here that Brazil’s Carlos Ribas was eliminated when the nine-year-old Wilexo didn’t like the look of it and ducked left twice. And then, just a few horses later, Fredricson got into a muddle here with Matrix. There was a choice of six forward or seven holding strides, but the Swedish rider’s horse found a very long-distance launching pad, and paddled through the poles of the opening triple bar, firing his rider onto the floor.

The class settled down then for some time, but the closing stages produced some odd results. Picture-perfect runs from Australia’s Edwina Tops-Alexander and Itot du Chateau, and 2012 Rolex FEI World Cup™ champions Rich Fellers and Flexible for the USA, were followed by more of the same from Belgium’s Dirk Demeersman (Bufero van het Panishof), Holland’s Gerco Schroder (London) and Brazil’s Rodrigo Pessoa (Rebozo).

There was a gasp of disappointment when the extraordinary Ian Millar, who at the age of 65 is the only Canadian ever to collect High Performance Funding and his state pension at the same time, and who is setting a new record with his 10th Olympic appearance at these Games, lowered the skinny penultimate vertical with Star Power. Typically stoic, Millar said “I would have preferred one less rail down, but if you are going to make mistakes then this is the time to do it.”

And there was a huge groan from the home crowd when Britain’s Peter Charles and Vindicat missed their strike to the opening element at three, demolishing the first element and lowering the second but somehow re-grouping to complete with just 10 faults on the board. Charles said “it was a disgraceful start, but it got better. He (Vindicat) was a little tentative and distracted by the crowd”, he said.

There were just eight horse-and-rider combinations left to run when Christian Ahlmann set off with Codex One. And they were looking good all the way until reaching the last test on the track, the Stonehenge double, where the 10-year-old stallion backed right off the first element and then, landing short, put down again when the one-stride distance just didn’t come up. And when asked to take it on a second time the stallion still refused to cooperate. Ahlmann was hugely disappointed afterwards. “I can’t explain what happened” he said. “It might be that he (Codex One) got frightened after the pole down in the combination. I can count myself lucky that he stayed clear at the second try!”

Ahlmann will continue to compete as part of the German team, but is out of contention individually, and the same applies to the USA’s Beezie Madden. It wasn’t her day either. Her 14-year-old mare, Via Volo, was putting in some enormous jumping efforts all the way around the track, but at the double at fence nine it all unravelled when the horse went too high at the opening vertical and then couldn’t make the distance to the following oxer. And the mare didn’t want to know about it when asked again a second time. Madden said afterwards “it was all going well and she was jumping amazing, then she started fighting me quite a bit and all our good work went wrong. She hasn’t done a lot of shows recently and I think she became a bit too impressed with the whole place. Luckily the rest of my team went well, so I must get things right tomorrow.”

Australia’s Matt Williams was also eliminated much earlier in the day when his nine-year-old gelding, Watch Me, decided he didn’t like the wide oxer at fence five, or its bright blue water-tray, and wouldn’t even approach it. Williams explained afterwards, “He is only young, and it all got too much for him,” he said.

At the end of the day, the Dutch were the only side to complete with four absolutely clean sheets from Jur Vrieling (Bubalu), Verdi (Maikel van der Vleuten), Tamino (Marc Houtzager) and London (Gerco Schroder), and that may be a warning to the rest as tomorrow’s action gets underway. But as Belgium’s Jos Lansink said today, “funny things happen at championships and the Olympics always produce surprises. For instance Beezie (Madden) was my favourite for individual gold and look what happened to her today! I have a good feeling for our team, so I hope this will continue,” he said.

11 countries represented by individuals only.

The biggest spread on the course was at the oxer first element of the double at 3a which was 1.90m wide and 1.50m high. The tallest fences on the track stood at 1.60m – the Abbey Road vertical at 6, and the Olympic Fence vertical at fence 12. At 18 years of age, America’s Reed Kessler is youngest-ever US jumping team member. She only began competing at Grand Prix level earlier this year.

The double at fence three, and the penultimate vertical were the bogey fences on the course. There were three doubles on the course and all of them produced faults for some of the 75 starters. —- By Louise Parkes, FEI/Photo: FEI/Kit Houghton