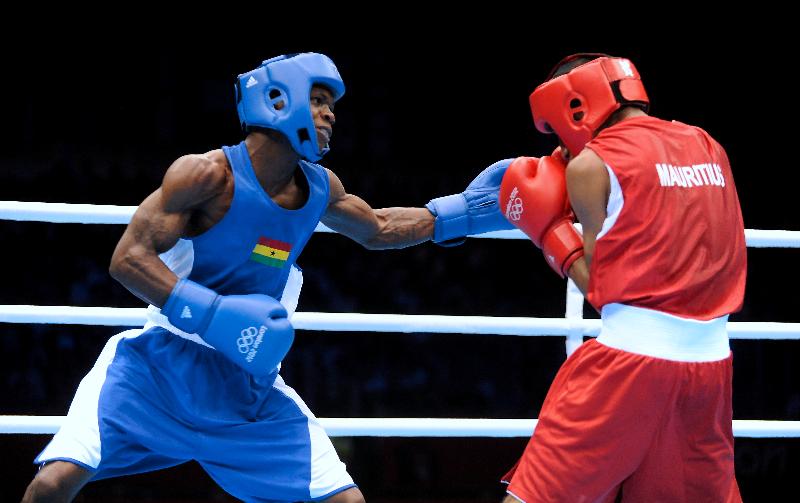 London, Great Britain, July 31, 2012 – It was a good day for some of the boxers of the AIBA Road to London program with Duke Micah and Jordan’s Ihab Mahmoud Darweesh Al-Matbouli both moving into the second round of preliminaries.

Jordan’s first ever boxer to qualify for the Games, Arab Games winner Ihab Mahmoud Darweesh Al-Matbouli looked hungry as he led 5:3 after three minutes against Nigeria’s All Africa Games silver medallist Lukmon Lawal. Al-Matbouli shined in the second part of the contest and advanced to the next round where he will now meet Cuba’s current AIBA World Champion Julio Cesar La Cruz Peraza.

Afghanistan’s Ajmal Faisal was invited to London by the Tripartite Commission while AIBA then offered him training in the Welsh capital. Faisal is only able to train three-times a week in Kabul and was therefore delighted to be part of the Road to Dream initiative. France’s AIBA World Championships bronze medallist Nordine Oubaali was just too strong for him but he did well against one of the medal contenders at Flyweight (52kg).

Two African AIBA Road to London members fought each other in the last 16 as Mauritius’ Commonwealth Games silver medallist Jason Olivier Lavigilante and Ghana’s Duke Akueteh Micah went head to head. Both boxers, born in 1991, went on the attack but it was Micah who stole the show as he claimed the victory.

Tajikistan’s former Asian Games winner Jakhon Qurbonov was quarter-finalist in the last Beijing Olympic Games and was involved in both the AIBA Road to Baku Program and Road to London I. He started well against Tunisia’s strong Yahia Elmekachari and used his height as a weapon but his rival moved better in the latter stages to prevail.

Colombia’s light heavyweight No.1 Jeysson Antonio Monroy Varela also received the invite for Cardiff and in his fight he seemed comfortable early on against Iran’s AIBA World Boxing Championships quarter-finalist Ehsan Rouzbahani. The taller Monroy could not keep his short advantage and ended up on the losing side.

Nicaragua’s Osmar Bravo Amador was class in his comeback victory against Montenegro’s Mediterranean Games winner Bosko Draskovic. He overturned a first round three point deficit to win in style and caused the biggest surprise of the third day of competition.

Cameroon is one of the most developing countries in Africa so it was no surprise that Light Heavyweight and All Africa Games bronze medallist Christian Donfack Adjoufack trained in the Welsh capital before the Games. However Germany’s AIBA Youth World Boxing Championships silver medallist Enrico Kolling was too strong for him as he lost his first bout in London. —- AIBA