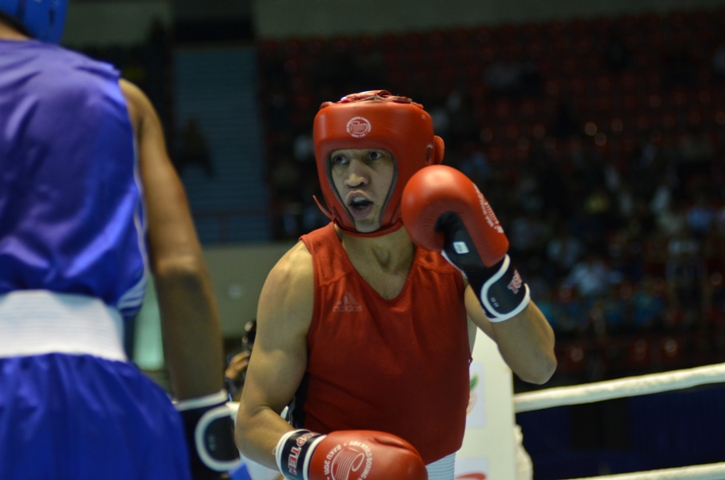 Lausanne, Switzerland, July 14, 2012 – Tajikistan team captain and AIBA World Boxing Championships Baku 2011 bronze medallist Anvar Yunusov, a superstar in his homeland, is a serious contender for the gold medal at the London 2012 Olympic Games after consolidating his position as the number one Bantamweight fighter in the World. This gifted southpaw is a savvy operator who has defeated most of his rivals in this Olympic era and now the 25-year-old is currently priming himself for the Olympic Games at the AIBA Road to London part II in Cardiff, Wales.

Having a boxer of Yunusov’s stature joining the AIBA Road to London program just shows how highly regarded this initiative is amongst the boxers. Understanding that AIBA hand picks the best coaches from around the world and provides state of the art facilities for these boxers to prepare for major sporting events, has made the initiative so attractive, even for the best in the business.

Born in 1987, he started boxing at the age of 10 and since then has never looked back. After Tajikistan became independent in 1991, following the break-up of the Soviet Union, the rise of the sport in the country in the last two decades has been astounding with Yunusov one of their leading lights. Tajikistan’s rise as a boxing power has been quick with Abdusalom Khasanov and Sherali Dostiyev having made their mark on the international stage but only Yunusov has the levels required to pull off the seemingly impossible, an Olympic gold medal.

Yunusov has been involved with the national squad since 2005 when he made his debut at the AIBA World Boxing Championships in Mianyang, China, and at the age of 18, he advanced to the quarter-final stages of these Championships. He was one of the youngest competitors in that tournament and unfortunately he just missed out on a medal.

Every major tournaments and championships in this Olympic era has seen the intelligent Tajik boxer take part. He had also qualified for the Beijing Olympic Games where he competed in the Flyweight category, advancing to the last eight, but once again just missing out on a podium finish.

Following the Beijing Games, Yunusov went up a weight class and competed in several international tournaments in both 2009 and 2010 without being able to make the impact he wanted to. But in the last two years, things have started to fall into place for him. The ASBC’s Elite Continental Championships Incheon 2011 was the real breakthrough as he defeated Mongolia’s Dorjnyambuu Otgondalai to secure Tajikistan’s second gold medal in the history of the event.

He was then seeded at the last AIBA World Boxing Championships in Baku and advanced to the semi-final stage where he lost against the eventual winner, Lazaro Alvarez of Cuba. Yunusov not only achieved a bronze medal but defeated in his quarter-final Russia’s former AIBA World Champion Sergey Vodopiyanov. In the Azeri capital, the Tajik had showcased marvellous technique to qualify for the Olympic Games.

Anvar Yunusov fought last season for Russian World Series of Boxing Franchise Dynamo Moscow and was part of the team that went on to reach the final in a gruelling campaign. Since then, he claimed the gold medal at the Governor Cup in St. Petersbourg where he defeated Italy’s rising star Vittorio Parrinello and completely dominated the Bantamweight category.

He is one of four Tajik boxers qualified for the London 2012 Olympic Games to have been invited to the AIBA Road to London part II Program and his presence will not only be beneficial for himself, as he receives advice from Head Coach Thomas Coulter, but for the other members of the initiative. This world class fighter brings added knowledge to the training camp and there are high hopes that he will make history during the Olympic Games. —– AIBA