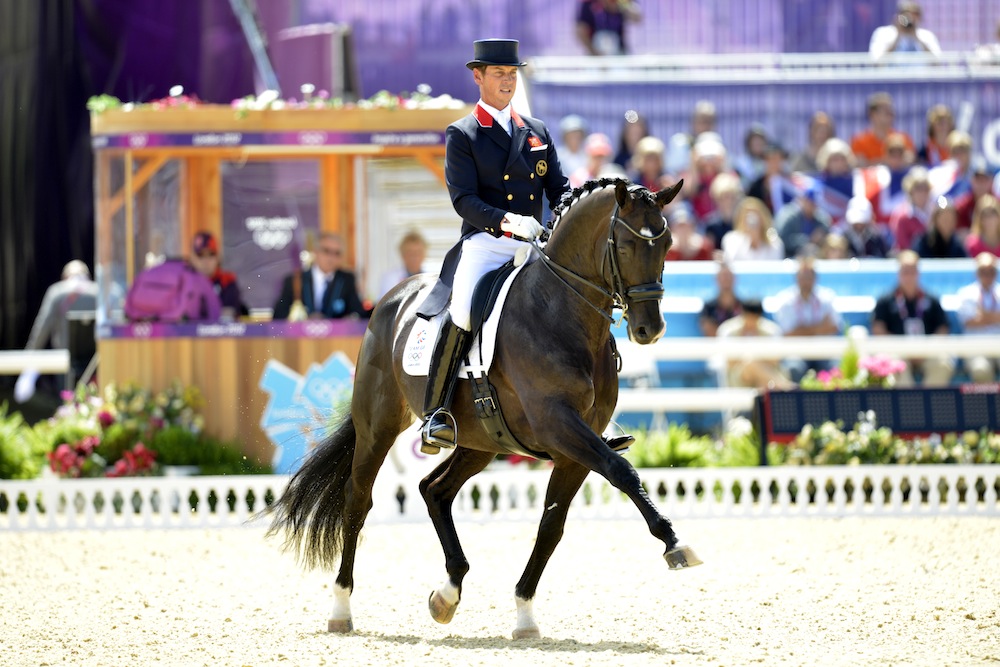 London – GBR, August 02, 2012: Britain’s Carl Hester and Laura Bechtolsheimer got the host nation off to a great start when claiming the top two places in the Grand Prix on the opening day of Dressage at the London 2012 Olympic Games in Greenwich Park today.

But Bechtolsheimer wasn’t content with her score of 76.839 with Mistral Hojris which leaves her just under one percentage point behind her team-mate as the second tranche of riders take on the Grand Prix challenge tomorrow. “I’m pretty gutted for my team that the score didn’t reflect what we thought it would be,” said the 27-year-old British rider who took three silver medals at the Alltech FEI World Equestrian Games™ in Kentucky (USA) two years ago with the same horse. “It is by far the lowest percentage that I’ve had in a few years. I hope it is just because the marks are lower here,” she said.

And she may have every reason to be concerned, because the mighty Germans, whose dominance of this sport at Olympic level includes 12 team and seven individual titles, sent out only one of their team members today. That was Dorothee Schneider who steered her lovely young mare, Diva Royal, through a calm and tension-free test to post a score of 76.77 for third place at this halfway stage of the Grand Prix competition.

If Bechtolsheimer thought she was having a bad day however, it was nothing compared to the nightmare elimination incurred by Canada’s David Marcus after his 12-year-old gelding, Capital, went into a dizzy spin when disturbed by the crowd during one of a series of rainstorms that swept across the arena. No matter how hard he tried, the rider couldn’t get the horse back under control, and his departure has ensured that only nine of the 10 teams that started today are still medal-contenders because, with only three riders per team, every score counts and the Canadians are down to just two.

Hester set the standard when last to go of the first group, riding the 11-year-old stallion, Uthopia, with which he won team gold and double individual silver at the FEI European Championships last year. He was already thinking about how his score would affect Great Britain, considering the new format which means that the team title will be decided by combined scores from both the Grand Prix and Grand Prix Special. Asked if the format will assist his team’s chances he replied, “potentially it will. Valegro (Charlotte Dujardin’s horse) and Mistral Hojris (Laura Bechtolsheimer) are both ‘hot’ horses, and having another chance to compete in the Grand Prix Special just might help them.” Having posted 77.720 to take the lead, he said of Uthopia, “he’s the coolest horse around. If I say walk, he walks, if I say stop, he stops. He’s a bit like a computer with a furry body!”

Defending individual Olympic champion, The Netherlands’ Anky Van Grunsven, who is the only Dressage rider to win three back-to-back Olympic titles and who set a new record today when becoming the first Dressage rider to compete at seven Olympic Games, lined out in the second group of riders with her double Olympic champion ride Salinero to rack up a score of 73.343 which slotted her into fifth place. But she was battling strong emotions.

“It has been very difficult. My husband (Dutch team trainer Sjef Janssen) fell ill today. He has flu, but because he had an operation for a tumour last November, I had to get someone to be with him this morning. He is OK but it was a big worry for me. I blocked it out while I was in the ring but now I am thinking about it,” she explained. “This is the first time in my seven Olympics Games that he has not been here to watch me,” she added tearfully.

She is determined to continue to support the Dutch Dressage effort however. “This time I am only here for the team, not for myself. If it was for my own result, I could have stayed at home. I do not have a good chance this time, but it is the team that matters,” she insisted.

Schneider followed her into the ring to take temporary second place, and then Denmark’s Anna Kaksprzak and Donnperignon slotted into third with a score of 75.289, but when Bechtolsheimer entered the ring, the leader board was altered as she wedged herself into runner-up spot between Hester and Schneider ahead of tomorrow’s action.

The British rider produced a powerful and eye-catching performance, but there were mistakes including one in the extended canter, where Hester also faltered, and she didn’t overtake her team-mate as she had clearly expected to do. “I felt like Mistral Hojris put in a really solid performance as always,” she said afterwards with disappointment in her voice. “In parts he got a bit strong, but I was always able to bring him back. He remained concentrated and focused throughout the test, and I felt like I put in a solid performance.”

More solid performances can be expected tomorrow, but the remaining two members of the Canadian dressage team are now competing as individuals following Marcus’ elimination. Jacqueline Brooks posted 68.526 with D’Niro today, and Ashley Holzer and Breaking Dawn will take their turn tomorrow morning. It’s been a stormy Olympic Games for the Canadians so far, their Eventing team failing to finish with three eliminations on cross-country day and their Dressage team chances now also dashed.

But their jumpers were in flying form this morning and are looking forward to defending their individual gold and team silver medals won at the Beijing Games in Hong Kong. Ten-time Olympian Ian Millar reflected on the changes in the sport since he competed at his first Olympic Games at Munich (GER). “It’s not really the same as back in 1972,” he said. “We have different type of horses and the style of riding has evolved as well as the courses, the fence material – everything – so it’s been an interesting challenge for me to stay with all that change. I’ve enjoyed the challenge of changing with it though and I work with my son and daughter and they keep me young – as does this annoying team!” he added, nodding at defending individual Olympic champion Eric Lamaze, Tiffany Foster and Yann Candele.

Lamaze talked about his horse, Qerly Chin. “She lacks experience but has quality and is careful. We expect a nice friendly start to the Games, we have a few rounds to get going and by then I hope she’ll be at her best. She’s lacking a little mileage but I think she’s ready,” he said.

Millar was asked how he thought his legendary horse, Big Ben, would cope with the sport today. “One of his greatest characteristics was learning how to adapt,” he replied. “People said at first he was just a big, strong Championship horse but too slow for anything else and no good indoors, but he won two back-to-back World Cup titles and I would think he could have learned to adapt to the challenges of the sport.” he said.

Lamaze’s 2008 Olympic champion horse, Hickstead, died suddenly last year. Asked to compare Hickstead with Big Ben, Millar said in tribute, “they both had the most important things – willingness, ability to learn, they stayed physically strong, they were good in heart and mind, and both had an innate feeling for when the moment was important and rose to the occasion.”

On a lighter note, when asked how it felt to over-take Austria’s Hubert Raudaschl who, until now has held the record for most Olympic appearances, Millar seemed to think he had the edge, replying with a big smile, “oh yeah, the yachtsman, well I think that’s a lot easier than sitting on our furry friends to be honest – it’s a bit like apples and oranges!” Not much comparison then!

Back in the Dressage arena it will be America’s Tina Konyot who will kick off tomorrow’s action with Calacto V while Helen’s Langehanenberg and Damon Hill from Germany will bring the day to a close. —- FEI by Louise Parkes & Photo: FEI/Kit Houghton