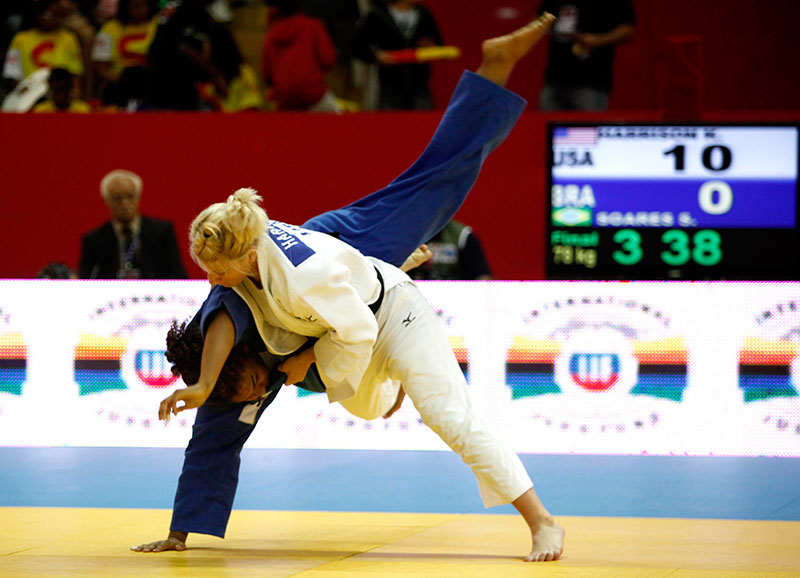 The first final of the day begun under the cheers of the Brazilian crowd, which was obviously supporting its champion, Victor PENALBER, against the American, Travis STEVENS. Nevertheless, after one minute and a half, PENALBER was penalized for passivity. But supported by an incredible audience, the Brazilian increased the level of his judo and STEVENS was also penalized for passivity. After the five minutes of regular time, the two fighters entered the golden score. The rhythm of the fight seemed to get higher and higher throughout the golden score, but none of the two champions could score anything. It was time for the referee decision and without any doubt, the three ‘men in black’ gave the victory to PENALBER, under the approbation of STEVENS, who knew that his opponent did a better job.

The preliminaries were dominated by the American, Travis STEVENS, who was the favorite of the competition and who successively eliminated MOURA Mauro Henrique (BRA) and EFFRON Alfredo (ARG), both by ippon. In the semi-final, he was opposed to the Russian, BUGA Maksim, who defeated the other Russian competitor, Alexander GRIGOREV, in quarter final. After 40 seconds, STEVENS launched a first sumi-gaeshi but for no score. The movement was immediately followed by a long session on the floor, which ended with oseakomi, but once again for no score as BUGA escaped. 1 minute and a half later, again, STEVENS followed one of his favorite technics on the floor and that time, could conclude for ippon and could qualify for the final.

The second semi-final opposed the two Brazilian fighters, Felipe COSTA and Victor PENALBER, who in quarter final eliminated World number 25, Avtandil TCHRIKISHVILI, from Georgia, whereas PENALBER is only pointing at the 189 position in the World Ranking List. After only 30 seconds of fight, PENALBER scored a waza-ari with a shoulder movement. Two penalties later against COSTA and PENALBER added one yuko to the scoreboard, followed by a second one, score on ippon-seoi-nage. That was enough to enter the final against STEVENS. 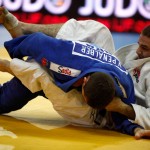 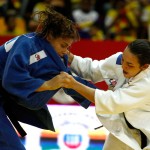 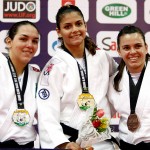 In the bronze medal fight, ROMANELLI waited until the last minute and a half to score waza-ari with a precise de-achi-barai against Vanessa CHALA (ECU). 50 seconds later, CHALA also scored but only yuko. Physically dominated, the Brazilian continued to attack and could maintain the score to win the bronze medal.

The final was one of the shortest of the weekend, as LIPARTELIANI, only after a few seconds, launched a form of kata-guruma with no leg grab, and scored ippon against the Argentinian Hector CAMPOS.

Varlam LIPARTELIANI, with no doubt, was the grand favorite of the competition, especially after his victories at the European Championship, in April, and at the Judo Grand Prix, Düsseldorf 2012, earlier this year. In semi-final, he was opposed to the Chilean, Thomas BRICENO. Just before the first minute of combat, he scored waza-ari with a shoulder movement (ipon-seoi-nage), but the score was transformed into a yuko by the video refereeing commission. A little bit more than one minute later, LIPARTELIANI again scored with a shoulder technic (eri-seoi-nage), but that time for ippon.

The second semifinal opposed the two top seeded athletes of the second part of the draw: Hector CAMPOS (ARG) and Eduardo SILVA (BRA). After the five minutes of regular time, the scoreboard was still empty and the two fighters entered the golden score. Hector CAMPOS signed his ticket to the final when he finally scored waza-ari.

After 25 seconds, Kayla HARRISON launched a first major attack, and scored waza-ari on uchi-mata. Totally controlling her opponent, the Brazilian Samanta SOARES (BRA), she scored again with the same technic, a few seconds later, for ippon.

The 2010 World Champion, Kayla HARRISON, chose the Judo Grand Slam, Rio 2012, as a last test before the Games, and as she mentioned on a Facebook Official page, ‘in 47 days it will be my day’. But before London, there was Rio and with no surprise, the young American sent back home her first opponent, the Brazilian Talita MORAIS. After several spectacular attacks, which did not score more than yuko, HARISON, followed on the floor with a perfectly executed juji-gatame (armlock) for ippon. The bronze medal went to Talita MORAIS (BRA) who defeated her teammate, Patricia LOIOLA.

Men’s -100kg: Olympic and World Champion, TSIREKIDZE, back on Track

The final between Hugo PESSANHA (BRA) and the Olympic Champion and world champion, Irakli TSIREKIDZE (GEO), was expected to be spectacular, and after only a few seconds, the Georgian launched a o-soto-gari and scored ippon. It was already finished.

Even if the top seeded athlete of the category was Levan ZHORZHOLIANI (GEO), it is Hugo PESSANHA (BRA), who entered the semi-final against Renan NUNES, also from Brazil. But it must be said that PESSANHA is not an unknown competitor. Usually fighting in the lower weight category (-90), he was bronze medalist at the World Masters, last January in Almaty (KAZ) and won the London Prepares Olympic Test Event, last December. The Judo Grand Slam, Rio 2012, therefore represented a good preparatory test for him.

The semi final against his teammate was not that easy and after the five minutes of regular time, the two athletes had to go through the golden score. Within a few seconds, PESSANHA engaged a powerful uchi-mata, which was immediately countered by NUNES with ura-nage. The referee gave waza-ari. NUNES immediately exploded with joy, but after the control on the video care system, it was obviously a tremendous counter attack but not a scoring technique. The semi-final started again and PESSANHA increased the pressure on his opponent, who was finally penalized for the second time. The second semi-final of the day opposed Cristian SCHMIDT (ARG) and Irakli TSIREKIDZE (GEO), and the fight was only 18 seconds long as TSIREKIDZE, rapidly scored ippon with a counter attack.

The final opposed, Vanessa ZAMBOTTI (MEX) and Claudirene CEZAR (BRA). None of the two competitors being able to score, the match was only won with penalties, two against CEZAR and one against ZAMBOTTI, enough for the Mexican to win the tittle.

World number 12, Vanessa ZAMBOTTI (MEX) won her ticket to the final block within 1 minute of fight, by defeating Aline PUGLIA (BRA). In her semi-final, she faced another Brazilian competitor, Rafaela NITZ, and was not longer on the tatami. After only 30 seconds she scored a first time and then followed on ne-waza for ippon.

In the final, Adam OKRUASHVILI (GEO) rapidly scored yuko with a counter attack, immediately followed by a waza-ari. Just before the last two minutes, the Georgian finally immobilized SANTOS for ippon.

While, World number one, Teddy Riner, went to Lisbon and won the World Cup, the Brazilian crowd was focussed on Daniel HERNANDES, World number 11. In the semi-final, he was opposed to another local competitor, Walter SANTOS and the scenario was not as announced. During most of the fight, the two competitors were really tight, and both received two penalties for passivity. The Golden score was approaching, when SANTOS could finally score an ippon with a counter attack executed on the edge of the competition area.

The second semi-final of the day, which opposed Adam OKRUASHVILI, from Georgia (World Number 16) and David MOURA (BRA – WRL 33), was shorter. Exactly after one minute, the Georgian immobilized his opponent for ippon.