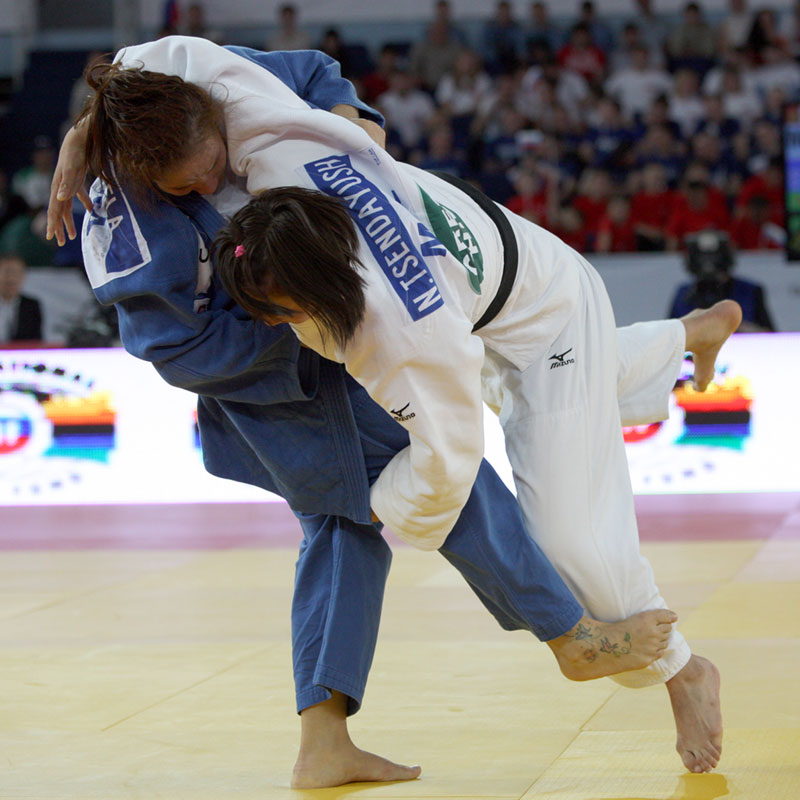 The final between Murat KHABACHIROV (RUS) and Yakhyo IMAMOV (UZB) started on a very high rhythm, both fighters trying to score as fast as possible. But the public had to wait two minutes to see KHABACHIROV scoring the first waza-ari with a beautiful o-soto-gari, immediately followed by an other waza-ari but this time for IMAMOV, also on o-soto-gari. 15 seconds before the end of the fight, IMANOV launched a combination of movements ending with kata-guruma, but the second movement, starting from the floor, was not taken into account. With one waza-ari for each, the finalists entered the golden score with the same desire of scoring ippon, but like cats, both of them escaped from impossible situations until the very end of the final. It was time for the referee decision and with three white flags, Russia won its first title of the week-end with Murat KHABACHIROV.

In the men’s -81kg, the young Japanese Tomohiro KAWAKAMI was expected in the final block, but rapidly during the preliminaries, he was eliminated by GAN Tuvshinjargal (MGL), by ippon in less than 2 minutes. In the pool B, the Russian, Murat KHABACHIROV, was the strongest fighter of the morning session and was opposed to the Mongolian for a place in the final. But GAN was rapidly penalized with a hansoku-make for an evident direct leg grab.

To enter into the second semi final, the two top seeded athletes, Tomislav MARIJANOVIC (CRO) and Yakhyo IMAMOV (UZB) made it through the preliminaries. To enter the final, the fight seemed to be really tight when MARIJANOVIC launched a strong attack, instantly countered by IMAMOV, who overpassed with a spectacular O-goshi, for ippon.

After 30 seconds, Maria PORTELA received a first shido (kumikata on same side), but was able to score a yuko right after, taking the lead of the final against Naranjargal TSEND AYUSH, from Mongolia. The opposition of style was evident, the Mongolian being much taller than the Brazilian, PORTELA was trying to go under the center of gravity of TSEND AYUSH, with shoulder movements, while the asian athlete was trying to score with wide leg attacks. But the first yuko scored by PORTELA was enough to get the title, the third gold medal of the weekend for the Brazilian team.

With no big surprise, the semis opposed the four top seeded athletes of the day. World number 5, Rasa SRAKA (SLO) was opposed to Naranjargal TSEND AYUSH (MGL) in the upper part of the draw and was sure to enter the final, when 30 second to the end of the combat, while she was still leading with a small yuko, she was caught with an implacable immobilization. Really surprised to enter the final, Naranjargal TSEND AYUSH let her joy explode. In the second semi final, Maria PORTEKA imposed her strong judo to dominate Kelita ZUPANCIC (CAN).

The first minute of the final was like an observation round between Ilias ILIADIS (GRE) and Grigorii SULEMIN (RUS), who didn’t want to let the Greek champion impose his power. This little game ended with one shido for each, given just after 2 minutes of combat. Solid like a rock, ILIADIS, launched his first spectacular o-goshi after 2 minutes and 45 seconds. Initially scored waza-ari, the video refereeing table, proposed to transform it into ippon, so ILIADIS could win one more title on the occasion of an IJF World Judo Tour event. The Greek will definitely be one of the favorites for the Olympic title, next August in london.

The men’s -90kg was a very interesting category as many top ranked athletes in the World Ranking list, as well as good favorite for the Olympic title were present. Among them, Ilias ILIADIS, world number one, wanted to erase his deception from the European Championship, where he lost during the preliminaries despite the fact that he was largely leading his fight. Until the semi final, nobody could be in the position to put him in danger and he successively eliminated USTOPIRIYON Komronshoh (TJK) and Kamil MAGOMEDOV (RUS). In the semi final he faced Milan RANDL (SVK), who could not do more than the other fighters and was also eliminated by the world and Olympic Champion.

In the second part of the draw, the public was expecting a festival from the new Japanese star, Hirotaka KATO, who recently won the All Japan championship. But, he was rapidly defeated by Dilshod CHORIEV (UZB), who lost in the quarter final to Grigorii SULEMIN (RUS) by a spectacular ippon. The second athlete qualified for the semi was Magomed MAGOMEDOV (RUS), who won against the Olympic Champion of the -73kg weight category, Elnur MAMMADLI (AZE), now competing in -81kg. MAMMADLI, who did not want to lose weight to much in advance before the games, competed in -90kg here in Moscow and he was sure that he had scored a waza-ari with a perfectly executed o-uchi-gari, but that was not the opinion of the video refereeing table, who clearly showed that MAMMADLI directly grabbed the legs of his opponent before executing his decisive technic, for a hansoku-make. During the fight against MAMMADLI, MAGOMEDOV was injured and could not defend himself for a place in the final, SULEMIN being directly qualified to face the ogre ILIADIS.

Women’s -78 kg: COTTON is in Gold tonight in Moscow

The final opposed Lkhamdegd PUREVJARGAL (MGL) and Amy COTTON (CAN). After a little bit more than one minute, a first shido for passivity was given to PUREVJARGAL, but with no incidence on the scoreboard. After two minutes, the two finalists received another shido, for preventing the opponent to grabbing the judogi. With two shido against her, the Mongolian gave the lead to the Canadian, who immediately after scored waza-ari with a rapid and precise counter attack, ura-nage. 13 seconds before the end of the final, COTTON was penalized again for passivity, but not enough for PUREVJARGAL to take the lead and the Canadian won the title of the 2012 edition of the Judo Grand Slam, in Moscow.

In the first semi-final, the top seeded athlete, Lkhamdegd PUREVJARGAL (MGL) did not face major difficulties to qualify for the last fight and she successively eliminated Alena PROKOPENKO (RUS) and Vera MOSKALYUK (RUS).

The second semi-final of the day in the Women’s -78kg category, opposed the Canadian Amy COTTON, recently bronze medallist at the Pan American Championships in Montreal, and Luise MALZAHN (GER), who obtained a fifth place this year on the occasion of the Judo Grand Slam, Paris 2012, as well as a fifth place at the European Championships, in Chelyabinsk.

Temuulen BATTULGA (MGL) and Ramziddin SAYIDOV (UZB) were the two athletes qualified for the final of the men’s -100kg. The combat started on a very slow rhythm, the two finalists appearing quite tired after a long day of competition. Progressively, the number of attacks coming from both sides increased and after a tachi-waza/ne-waza combinaison, SAYIDOV tried a first time to strangle his opponent, but with no success. Only a few seconds later, exactly the same situation occurred but that time, SAYIDOV was successful and scored ippon for the final victory of the category.

Until the semi final, World number 3, Sergei SAMOILOVICH (RUS), imposed his powerful judo, winning his two preliminary fights by ippon, but the semi final was a different story, against the world number 12, Temuulen BATTULGA, from Mongolia, who totally blocked him and finally won the fight.

As well as during the first semi final, the second one, opposed the two top seeded athletes of the lower part of the draw, Ramziddin SAYIDOV (UZB) and Ramadan DARWISH (EGY), and within a few seconds only, SAYIDOV placed a perfect seoi-nage, for a unquestionable ippon.

Women’s +78kg: WIth ALTHEMAN, Brazil gets its Fourth Title of the Weekend

The first strong attack of the final came from the winner of the Judo Grand Prix, Amsterdam 2012, Maria Suelen ALTHEMAN (BRA), who tried to put her opponent, Melissa MOJICA (PUR), out of balance with a reaction forward/backward and a tane-otoshi, but with no success. 1 minute 55 seconds exactly before the end of the final, she tried the same combination, and that time projected MOJICA on her back for ippon, adding a fourth tittle for the female Brazilian team.

In the absence of the top judo players of the heavy weight category, the suspense was limited and the two top seeded athletes of the day easily entered the final, Maria Suelen ALTHEMAN (BRA) eliminating Mariia SHEKEROVA (RUS) and Melissa MOJICA (PUR) defeating Polina BELOUSOVA (RUS).

Men’s +100kg: the Title for the Open World Champion, Tangriev

The Open World Champion 2011, Abdulo TANGRIEV (UZB), was again present in the final of the heavy weight category, during the last fight of the weekend, against Soslan BOSTANOV (RUS). After a little more than one minute of fight, TANGRIEV was penalized with a shido for passivity. Exactly one minute later, it was the Russian to be penalized, for the same reason. 2 minutes and 9 seconds bedore the final gong, TANGRIEV engaged a drop seoi-nage on the right side and scored waza-ari, putting an option on the final victory. Taking no risk, TANGRIEV was watching the scoreboard and was counting the seconds, when BOSTANOV launched a last strong attack but not precise enough to score anything. TANGRIEV could had one more victory to an already long list of medals and awards.

In the men’s +100kg, it was the come-back of the Egyptian, Islam EL SHEHABY, who had a serious knee injury at the World Master, in Almaty, last January. It was actually his second major competition after the African Championships, where he obtained a promising somber medal. But today, if he was able to test his knee, he was not capable to defeat the ligtht Georgian Nodar METREVELI, who attacked in all directions.