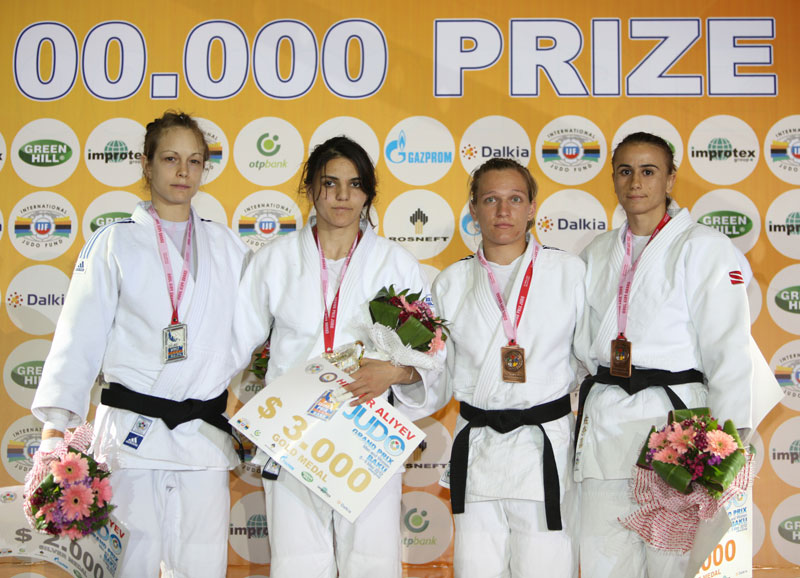 Baku-Azerbaijan (IJF), May 05, 2012: Azad RAHIMOV, Today was the first day of the Judo Grand Prix, Baku 2012, which was held at the Sarhadchi Sport Olympic Center in the outskirt of Baku, in the presence of several high representatives of the IJF and of Azerbaijan. 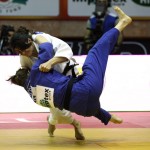 The competition was officially opened by the Minister of Sports, Azad RAHIMOV, the President of the Azerbaijan Judo Federation, Mr. Fizuli ALAKBAROV, who is also the Minister of Labor and Social Protection of the Population of the Azerbaijan Republic, and by Mr. Vladimir BARTA, the IJF Head Sports Director, who was representing the IJF President, Mr. Marius VIZER. During the ceremony, Mr. BARTA presented an IJF official Judogi to the two Ministers. A judogi was also officially offered to the President of the Republic, Mr. Ilham ALIYEV. Right after the official opening words given by Mr. BARTA, a dramatic opening ceremony full of stunning dance made way for the final block!

Due to the end of the Olympic qualification process, which ended last week after the last continental championships, the level of participation was logically expected to be a little less high than last year’s first edition of the Judo Grand Prix in Baku. Nevertheless, the judo that was proposed to a numerous and enthusiastic public was definitely very attractive. As an illustration of this, it must be noted that during the preliminaries, almost 70% of the men’s fights were concluded by ippon, whereas the ippon’s rate raised up to more than 80% for the women. As Mr. Vladimir BARTA explained: “it is interesting to see how the countries that are present here in Azerbaijan, used this year’s edition of the tournament to test their new generation of fighters. We will probably see most of them again during our next IJF World Judo Tour events and that is a very good sign of the good health of our sport at the international level”. Even if the points that were attributed today in Baku do not count for the Olympic qualification anymore, they still count for the IJF World Ranking List and the ranking may be significantly modified in some weight categories after today’s results. Actually there will not be any major changes for the top ranked athletes, but many competitors, who were fighting today, will make an important leap forward in the World Ranking List.

Women’s -48kg: First title of the Day goes to Turkey

The final of the women’s -48kg opposed Ebru SAHIN (TUR) and Vafa EYVAZAOVA (AZE). The Under 20 European Champion, Ebru SAHIN, launched the first strong attacks, but after the first minute, the scoreboard was still empty, despite some powerful technics. The first shido for passivity was given to the local fighter, EYVAZAOVA, after one and a half minute of combat. Changing the direction of her attacks from left to right, SAHIN seemed to be the strongest and was perfectly controlling her opponent but could not score at last a yuko to take the lead. One minute before the end of the fight a second shido was given to the Azerbaijani fighter, giving a yuko to SAHIN. After a last powerful attack that sent EYVAZAOVA to the ground for no score, she continued the action and won by ippon with a precise strangulation.

Men’s -60kg: On Way Ticket to Gold for Mushkiyev

The last fight of the category opposed the local, Ilgar MUSHKIYEV (AZE), and the Georgian, George MESABLISHVILI, who respectively defeated Orkhan SAFAROV, also from Azerbaijan, and the representative from Libya, Mohamed Elhadi ELKAWISAH, the two losers of the semi finals finished as bronze medallists. The final was a one way ticket to gold for Ilgar MUSHKIYEV (AZE) who successively scored two yuko, ending his competition day with a tremendous o-uchi-gari for ippon. The first Azerbaijan anthem could be played in front of an enthusiastic crowd.

Nothing could stop the Japanese, Nodoka TANIMOTO, until the final, where she faced Gulshan NAZAROVA from Azerbaijan. Earlier during the competition, Turane SEYIDI won the first medal for the host country of the Grand Prix, a bronze medal, widely celebrated by the packed crowed of the Sarhadchi arena. In the final, the first strong attack (ko-udhi-gari) was launched by the Japanese, but as a test and she didn’t score. The second attack, again in a backward direction, after only 39 seconds, was a huge o-soto-gari, coming from far away but ending with a perfect ippon.

For the second time in a row, Japan with Masashi KODERA, put its fighter into the final but this time against the Russian, Mikhail PULYAEV (RUS), who in the semi final was loosing against Nijat SHIKHALIZADA, when he scored ippon with a surprising counter attack. In the final, until the last minute, the only score came from penalties and the fight seemed to be a little confused. Led by yuko (2 shido against him), KODERA could find the necessary energy to come back and score yuko, right on the edge of the competition area. It was time for the golden score. But after only 40 seconds, the Russian was again penalized for passivity and Japan won its second title of the day. The two bronze medals were won by Tarlan KARIMOV (AZE) and Nijat SHIKHALIZADA (AZE), adding two more medals into the Azeri’s purse.

The semi-final, gave the opportunity to Kifayat GASIMOVA to confirm her top ranked position, with a 12th position at the World Ranking List, even if earlier during the day she had a difficult first fight. Led by a waza-ari and a yuko against Asena Tugba DURSUN (TUR), she finally scored a ippon that propelled her into the final block. To get her ticket to the final, she defeated the Croatian, Andrea BEKIC, who finished third of today’s competition. The second semi final was won by Joliane MELANCON, from Canada, Kudret EGILMEZ going back home with the second bronze medal of the category. The final was the shortest of the day. After only 15 seconds, GASIMOVA, who did not seem to feel really well all day long, begun to rotate faster and faster and threw the Canadian on her back with a traditional but powerful sasae-tsurikomi-ashi.

Men’s -73kg: Enthusiastic Support from the Public for Orujov

The last final of the day opposed Mirali SHARIPOV (UZB) and Rustam ORUJOV (AZE) who respectively defeated Zebeda REKHVIASHVILI (GEO) and Hasan YILMAZ (TUR), both losers of the semi-finals finished bronze medallists. During the last fight of the day, after a little bit more than one minute of a dynamic combat, ORUJOV put his opponent in danger several times without scoring. As a consequence, SHARIPOV was penalized by shido. During the last minute, SHARIPOV, supported by his public could counter attack the Uzbek athlete and scored a first waza-ari. But that was not enough for him. He wanted to win by ippon in front of a warm and fair-play crowd, which was present until the last moments of this first day of competition. 20 seconds before the end of the fight, ORUJOV immobilized SHARIPOV and could relax and enjoy his title.