When you switch on the television to watch the Paris Grand Slam this weekend, a familiar face will be skirting the sidelines, eagerly quizzing the participating judoka and sharing his inside knowledge of the sport. But before you get thinking, Loic Pietri has not shifted to an alternate career yet.

“It is always difficult to start something new but it will be an exciting challenge,” says the 2015 silver medallist at the World Judo Championships in Astana. Pietri will be making his debut for French channel, L’Equipe 21 as a special presenter while he nurses his body in preparation for the remainder of the World Judo Tour in 2015. It is perhaps fortuitous that his television debut comes at a time when the International Judo Federation has been making its presence felt at Sportel Monaco 2015, the annual meeting of the sports and television industry in the principality in the South of France. 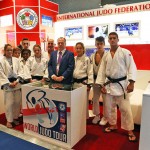 “It is very interesting to witness technical aspects of sports,” says Pietri, while explaining his experiences of being at the event this year. “It is only when you come here that you begin to imagine how much really happens in the background of sports events and sport itself. There is a certain ‘wow’ factor involved with being here as an athlete,” he adds.

In many ways, Pietri can be defined as the perfect poster boy of judo. Good-looking, well-built and with a very pleasant personality, he forms a perfect amalgamation of a judoka who can easily consider a career in television once he is done with competing in judo. And it is something that he is very open to. In fact, communication comes easy to him as can be amply witnessed by his official page on Facebook, where even his cover photo has a message for his fans and followers. Quiz him on the same and his answer is very refreshing.

“A photo is a good mode of communication and it is important that I project a good image as I live off it,” explains Pietri, who has been involved with judo since ‘he was a baby of the club’, in his own words. It only helps that his father, Marcel Pietri was himself an elite judoka who put the young Loic through his first steps in the sport. The grooming in the sport from his formative years seem to have lent Pietri a vast understanding of the sport and its varied constituents as he admits that they have as much, and maybe even more, to offer to him than he has to them.
“It is essential that I have contact with people who are practicing judo as these conversations help me in my development as a judoka. If I don’t keep an ear to the ground and listen to what people have to say, then I cannot offer any point of view on the sport,” says Pietri while dispelling any doubts, if there were any, on why he is set to make his debut as an expert on TV this weekend.

Role models in sport are extremely essential and in judo, maybe even more so as it is a sport ‘not just about the Olympics and the world championships’, in the words of the French judoka. He believes that it is essential to create a good example as ‘parents would not send their kids to the dojo’ if there were none. But true to his philosophy of communication being important, Pietri explains how a good example can be set by employing the use of technology for effective communications that can ultimately lead to motivating young practitioners to stay with the sport, rather than meandering elsewhere.

“It would be a good idea if there were applications developed by national federations that would allow young judoka to track their development through the ages. For example, if a young kid in France has an app that allows him to see that he is the 16th in his age group in the country he would be more motivated to stay within the structures of the sport rather than giving up due to lack of motivating factors,” reasons Pietri.

It is easy to understand how the young Frenchman is able to refine his thoughts to such a great extent when he informs you with a boyish grin that he is one of very few sportsmen who would prefer to be resting with a book in their hands rather than toy with a gaming console. It is a character trait that leads him to learn languages, one of which is Portuguese that he has been learning for almost a year. However, there is more than one reason for learning the language. Pietri is dating fellow judoka Sarah Menezes of Brazil, who won gold at the Olympics in 2012.

“Maybe I will be able to conduct interviews in French, English and Portuguese at the Paris Grand Slam,” says Pietri with a laugh as he prepares to usher in an uncharted chapter in his professional career. And if you thought that was the end of it, you would be mistaken. At the age of 25, Pietri was on the jury of the Golden Podium Award at Sportel Monaco 2015. If there was a better fit for judo at the biggest sports television conference in the world, one would have to look very hard to replace Loic Pietri. —- IJF