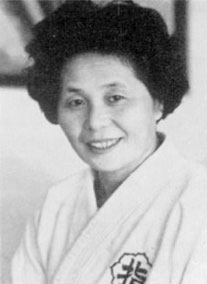 She was a renowned pioneer of women’s judo, being the first woman promoted to 6th dan, and later 9th dan (2006) by the Kodokan. On July 28th, 2011, she was the first and only women (so far) promoted to the rank of 10th dan. “This is a dream come true,” Fukuda said in the summer of 2011, shortly after she was awarded judo’s highest rank by USA Judo, the national governing body for the Olympic sport in the United States. Fukuda’s first reaction was “total surprise,” according to her caretaker, Shelley Fernandez, interviewed at the time. Then came a sense of great pride, “especially knowing that this promotion would help women’s judo,” Fukuda told Fernandez.

The last surviving student of the founder of judo, Jigoro Kano, Fukuda had separated from tradition as a young woman, choosing to train in judo under Kano rather than marry.

In the 1950s and 1960s, after completing her formal education in Japan, Fukuda visited the USA to teach. She then decided to stay in the US. She continued to teach her art in the San Francisco Bay Area, three times each week. She established the Keiko Fukuda Judo Scholarship to encourage and enable women to continue their formal training in the art. Apart from teaching in the USA, she also taught in Australia, Canada, France, Norway and the Philippines. Fukuda’s personal motto was: “Be gentle, kind, and beautiful, yet firm and strong, both mentally and physically.” Keiko Fukuda passed away at her home in San Francisco on February 9, 2013

The International Judo Federation presents its condolences to Mrs. Fukuda’s relatives and friends. She was an example for many judoka and specially for female judoka and she will remain a fantastic personality, who dedicated her entire life to the development of our sport.

Fukuda’s life is the subject of a documentary, ”Mrs. Judo: Be Strong, Be Gentle, Be Beautiful.” Go to the website for trailers to the film at http://www.mrsjudomovie.com/