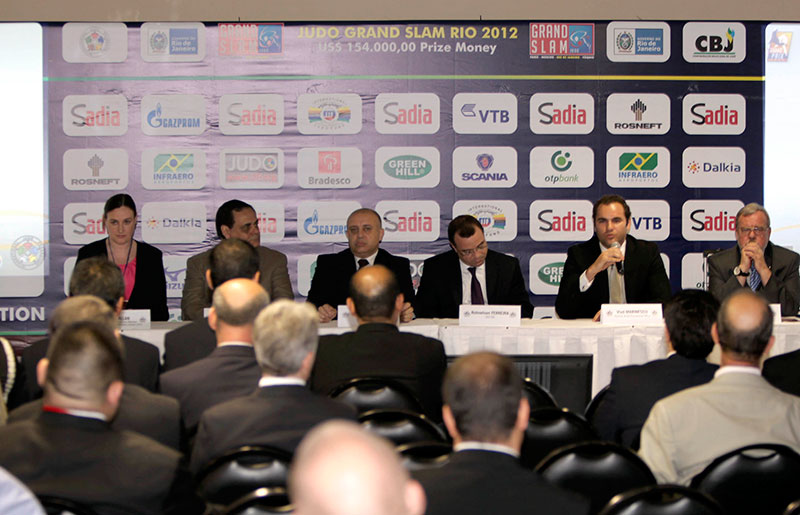 (By: IJF) Rio de Janerio, Brazil, June 9, 2012: As Vlad Marinescu, Director of the IJF Presidential Office, explained as an introduction to the official draw of the Judo Grand Slam, Rio 2012: “It is the last stop before the Games!” Actually, within a few weeks, all eyes will be focused on the British capital, where the thirtieth Olympic Games will be held. From July 28th on, the best Judoka in the World will meet to defend the colors of their country and to obtain the ultimate title. While waiting for the big Rendezvous, athletes are getting ready and the Judo Grand Slam, Rio 2012, is the very last step of the IJF World Judo Tour, where the competitors, who are qualified for the Games, can test their judo.

Third Grand Slam of the year, after Paris, last February, and Moscow, two weeks ago, Rio will gather together 118 competitors, coming from 17 countries. Beyond the sport dimension of the tournament, the Brazilian Organizing Committee, will use this year edition of the competition, to test the team, which will be in charge, at the beginning of October 2012, of the organization of the Team World Championship, which will take place in Salvador de Bahia. And next year, the judo planet will again meet in Brazil for the 2013 Senior World Championship (August 2013 in Rio).

The live results can be followed at: www.ippon.org/gs_rio2012.php

After the win of Asami Haruna (JPN), in the last year edition of the tournament, Paula Pareto ARG (WRL 8), will be the favorite for the title on the occasion of the first day of competition.

In the women’s -52kg the favorite will be Ilse Heylen BEL (WRL 7). Last year, Erika MIRANDA, from Brazil, was the gold medallist. She is now getting ready for the Games, as she will be the representative of her country in London.

Third on the occasion of the Judo Grand Slam, Rio 2012, Jovana ROGIC (SRB) will be the favorite of the category, to succeed to last year winner, Corina CAPRIORIU (ROU).

Who will be the finalists of the 2012 edition of the Grand Slam, after last year ultimate final between Kana ABE (JPN) and world champion, Gevrise EMANE (FRA)? Difficult to say and new names will be discovered.

The favorite of the tournament will be Vanessa CHALA from Ecuador.

This will be, once again, one of the most interesting category as the 2010 World Champion from USA, Kayla HARRISON, is in Rio for a last important test before the Games.

Vanessa ZAMBOTTI , from Mexico (WRL 12) will be the favorite of the competition.

Georgia came to Rio with its first team in order to participate in a very last international competition before the London Olympics. In this category, the favorite is Amiran PAPINASHVILI GEO (RL 8).

In the men’s -66kg, also the favorite will be the Georgian representative, Lasha SHAVDATUASHVILI GEO, who is also qualified for the Games.

The men’s -73kg will be the most numerous category of the competition. After last year win of the Japanese, Riki NAKAYA, Nicholas DELPOPOLO, qualified for the games, should be able to step on the podium. But other names like Miklos UNGVARI (HUN) or Nugzar TATALASHVILI (GEO) may also appear on the prize list.

As the Georgian team, the US squad came to Rio the test its athletes before flying to London. Travis STEVENS USA (WRL 10) will be the favorite of the tournament.

Varlam LIPARTELIANI (GEO) will definitely be the major favorite of the Men’s -90kg.

The same comment can be done concerning Levan ZHORZHOLIANI (GEO).

Daniel HERNANDES, frame Brazil (WRL 11), will try to win the Grand Slam title in front of his public.