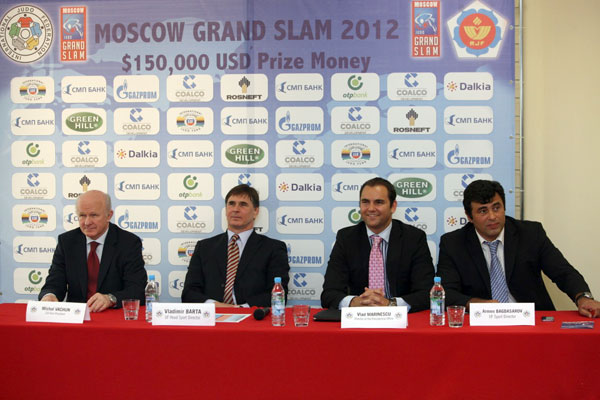 By IJF, May 25, 2012: PREVIEW, On may 26 and 27, 2012, the strongest judoka of the world will gather in Zvenigirod to participate in one of the most prestigious tournaments of the World Judo Tour. The competitions will be held on the platform of the recently launched Academy of Judo. The Russian tournament is one of the four Grands Slams organized every year by the IJF with a total prize money of US$ 154,000. This judo event has been held in the Russian Capital for more than 20 years and at every editions, it attacks more and more top level athletes.

Today, the official draw of the Judo Grand Slam, Moscow 2012, was conducted in the brand new Judo sports complex of Zvenigorod, just outside of Moscow, a centre which was inaugurated a few weeks ago by Vladimir Putin, the Russian President (judoka himself) and Marius Vizer, the IJF president.

Just before the tournament, which will be held this weekend from 10:00 am on (the final block starting at 6:00 pm local time) on Saturday and Sunday, Mr. Vizer declared: “In spite of the fact that this Moscow Grand Slam is not included into the qualifying Olympic Cycle for the 2012 Games, it is one of the most important events in the calendar of the International Judo Federation, and I hope that it will serve as an excellent check of forces of the athletes before the London Olympic Games.”

The IJF president can be assured that this year edition of the Grand Slam will definitely reach a very high level with 34 countries present and 165 fighters in men and women. Boxing legend, Nikolai VALUEV, who attended the draw today, declared that he was very impressed by the level of participation: “There will be winners and losers, but never forget that one day the losers can, and will, become the winners”, said the champion, before adding: “I wish good luck to all the participants and I hope that they will have good time in Russia”.

The IJF Head Sports Director, Mr. Vladimir Barta, who conducted the technical aspects of the draw, welcomed all the delegations and wished them good luck for the tournament as well as for the upcoming Olympic Games: “in less than two months, we will meet again in London and I am sure that many athletes that are present here in Moscow, will also be present in the British Capital and that many of them will step on the podiums of the Games.”

The level of the competition will be particularly high in the women’s lightest weight category as number 3, number 4 and number 5 in the World Ranking list, respectively Sarah MENEZES (BRA), Charline VAN SNICK (BEL) and Alina DUMITRU (ROU), will compete for the title. The recent final of the European Championships opposed the Belgian and the Romanian fighters, Dumitru winning her 8th title at the continental level. The 29 year-old competitor is now focussed on the preparation of the Olympic Games where she is dreaming of winning a second Olympic title. The three athletes have the potential of winning an Olympic Medal in a weight category where the concurrence is particularly high.

Many teams have come to Moscow having in mind the preparation of the London Olympic Games, but obviously many of them also have come in Russia in order the prepare the next generation of fighters (Rio 2016). The favorite in the women’s -52kg will be the world number 4, Erika Miranda (BRA), who recently won the Pan American Championship in Montreal, the German, Lise HEYLEN, having also some good chance to enter the final block of the competition (WRL 14).

Corina Caprioiu (ROU), number 6th at the World Ranking List, is the favorite of the competition and should not have great difficulties the step on the podium. But in that category, many athletes are members of the young generation and the predictions are therefor quite difficult. Some of the names that are present in the draw could be some of the big names of tomorrow’s judo.

The battle for the Olympic Qualification between Alice Schlessinger and Yarden Gerbi, both from Isreal, has been tough for the last two years, Schlessinger finally winning her ticket to London, despite the beautiful silver medal won by Gerbi on the occasion of the recent European Championships. Schlessinger will be present in Moscow. Her main contestant will be Munkhzaya TSEDEVSUREN (MGL), 10th a the WRL.

The Slovenian, Rasa SRAKA, two times bronze medallist at the World championship, will be the favorite of the competition on Sunday, in the Women’s -70kg category. In the absence of the four best players of the category, she has good chance to win her first Grand Slam, after having already won two bronze medals (Tokyo 2010 and Rio 2010). World number ten, Maria PORTELA (BRA), will be the second favorite.

The two favorites of the category are Lkhamdegd PUREVJARGOL, from Mongolia and Amy COTTON, from Canada, who finished 3rd at the Pan american Championships, a few weeks ago. But this is without counting on Anett MESZAROS (HUN), who had disappeared from the international tatami since October 2011, in Abu Dhabi. Two times silver medallist at the world Championship, the Hungarian, who is qualified for the Games, wants to show that she will be among the favorite in her weight category, which is actually -70kg.

The favorite of the competition is Maria Suelen ALTHEMAN from Brazil, who is currently 11th at the World Ranking List.

In the men’s -60kg, the world number one and winner of last year edition of the Grand Slam, Rishod SOBIROV (UZB) is present. Already winner of the Judo Grand Slam, Paris 2012, last February, Sobirov should not face any major difficulties until the final block, even if a surprise is never excluded. In the second half of the draw, the favorite is Ilgar MUSHKIYEV, from Azerbaijan, who is currently number 6 at the World Ranking List.

Among the 18 engaged athletes in this weight category, 16 of them are ranked in the WRL. According to the ranking, the favorites are Miyaragchaa (MGL) and Tomofumi TAKAJO (JPN).

Number 6 and number 8 in the world will be the two favorites of the competition in the Men’s -73kg: Nyam-Ochir SAINJARGAL (MGL), who was finalist on the occasion of the Judo Grand Prix, Düsseldorf 2012, and who already won the Judo Grand Slam, Paris 2012, last February, and Navruz JURAKOBILOV (UZB), who was third in Tashkent on the occasion of the Asian Championships, some weeks ago.

In the absence of the best players and of last year winner, Sven Maresch (GER), the favorite in the men’s -81kg will be the young Japanese Tomihoro KAWAKAMI, who can represent the future generation of Japanese champions.

This category will be particularly followed here in Moscow as world number one and favorite of the public at the world level, Ilias Iliadis (GRE), will defend his last year title. But nothing is written in advance in a very open category, where the ranking does not play such an important role. Hesham MESBAH (EGY), Dilshod CHORIEV (UZB), Marcus NYMAN (SWE) are serious contestants to the Olympic and World Champion, Iliadis. And what about Elnur MAMMADLI, Olympic Champion in -73kg, in Beijing, who now competes in -81kg but who did not want to lose weight too much in advance before the games? For sure, he did not come in Moscow just for fun.

In the men’s +100kg, the level will also be particularly high with the presence of Islam EL SHEHABY (EGY), number 5 in the WRL and Abdulo TANGRIEV (UZB), the Open World Champion, in Tyumen 2011.

After the official draw, all the delegations and referees could learn more about the rules that will be applied concerning the judogi control during the London 2012 Games. “According to the rule 51 of the International Olympic Committee, the judogi control that will be applied in London will follow the IJF regulation but for the advertising. The back numbers will be provided by the London organizing committee. A special sticker that will be positioned on the judogi and belt control labels will be tested here in moscow”, explained the IJF experts.

The heads of delegation were also asked to follow and respect as much as possible the judo values, particularly to comply with the respect of the environment.

Just before the end of the draw, Vlad Marinescu, Director of the Presidential Office and in charge of the TV matters, explained to the audience that for the first time ever during the games, judo will be filmed in 3D. Following the IJF requirements, the Judo tournament will also be broadcasted using a crain camera, when also for the first time ever, a camera will be positioned inside the warm-up area: “the image of judo has drastically changed since 2007, but it’s only the beginning. People will see our sport differently in the future”, concluded Marinescu.