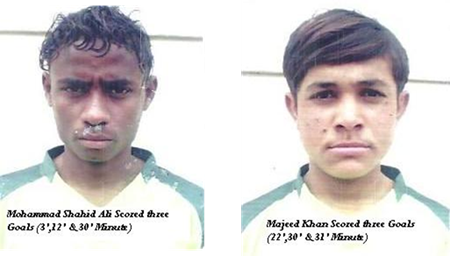 Lahore – Pakistan, April 26, 2013: Pakistan U-14 footballers showed their mettle and thrashed Kyrgyzstan in AFC U-14 Championship -2014 (Qualifiers) match at Samen Al Aemeh Stadium, Mashad, Iran by 8:0. Strikers Muhammad Shahid (3’, 12’ & 30’ minutes) and Majeed Khan (22’, 30’ & 31 minutes) both scored 3 goals each. Striker Salman scored in the 59thminute and Defender Saif scored the last goal by scoring in the 60thMinute through penalty kick.

The victory of Pakistan further cement’s their chance to qualify for the final round of AFC U-14 Championship. Hard and dedicated supervision of Pakistan Football Federation (PFF) along with the team management has brought this victory to Pakistan.

According to the press release issued here by PFF, Pakistan enjoyed most of the possession and took no time to settle into the game. Pakistan team showed its expertise in the game of football by exhibiting a formidable offensive and defensive line. This match was equally important for Kyrgyzstan whose team has already played a draw against Turkmenistan and a dismal loss against India. Though for Kyrgyzstan team this match was crucial to remain in the competition but their hopes were bulldozed in this match by a better planning and offensive strategy of the Pakistani team under the expert coaching.

President PFF, Makhdoom Syed Faisal Saleh Hayat showed great delight on the dedication of the Pakistani team and said that they have kept their promise. He was pleased with the effort of PFF in coaching of the players and training being given to them by their coaches. Moreover, he added that this tremendous win will boost the morale of not only the youth but also the upcoming talent of the country.

Lt. Col. ®Ahmed Yar Khan Lodhi, TI (M), General Secretary PFF in his message said that the performance confirms that at youth level, the players have the will and zeal to compete. Pakistan deserves full credit for the win as they defied all odds before the tournament to guide the Green Guns to a historic win today. Many congratulations to the people of Pakistan and football family of Pakistan.

With two victories under the belt confident Pakistan U-14 National team now play their next games against arch rival India on 28 April, Host Iran on 29 April.