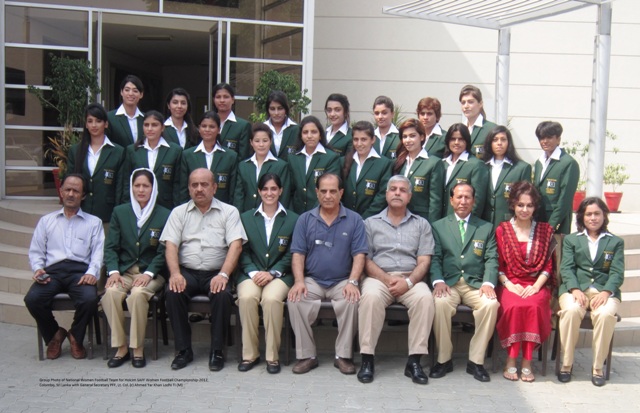 Lahore – Pakistan, September 04, 2012: Pakistan National Women football team is leaving for Sri Lanka on Wednesday, September 5, 2012 through PK-303 at 1100 Hours PST from Allama Iqbal International Airport, Lahore to Karachi and from Karachi to Colombo through UL 184 at 1710 Hours PST to take part in Holcim SAFF Women’s Championship-2012 in Sri Lanka to be held from 7th September to 16th September, 2012.

According to the Pakistan Football Federation (PFF), Makhdoom Syed Faisal Saleh Hayat, President PFF wished all out success for the national women team. He hoped they shall play in an outstanding manner as the peoples of Pakistan are looking for a victory by their young women players. He expressed his satisfaction on their training and the ability to play well.

Pakistan has been placed in Group B with the Nepal, Maldives and Afghanistan, according to the draws unveiled by the South Asian Football Federation (SAFF) for the Holcim SAFF Women’s Championship-2012, Colombo, Sri Lanka penciled in for September 7-16 at Colombo Rugby & Football Club (CR&FC) Ground, Colombo 7 in Sri Lanka. India, Bangladesh, Sri Lanka and Bhutan have been adjusted in Group A.