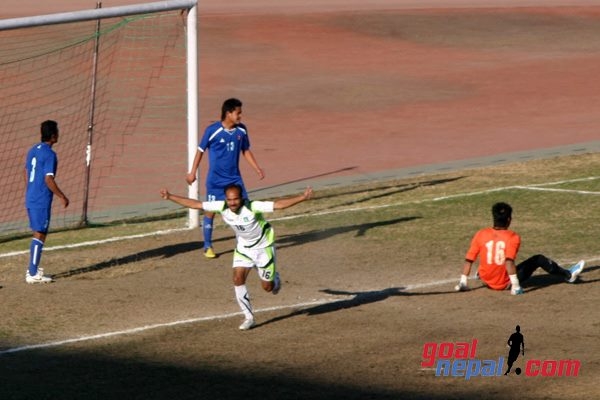 Lahore – Pakistan, Feb 09, 2013: Pakistan clean sweeps Nepal in two friendly football matches at Dasarath Rangasala Stadium, Kathmandu, Nepal. Striker Muhammad Mujahid gave Pakistan his second win when he scored the decisive goal in 65th minutes of the game by utilizing a defensive lapse in Nepal defense line and bringing the honor for Pakistan in the hard fought match. The final score line was 1:0 in favour of Pakistan and this victory of Pakistan places it among the top teams of Asia. Hard and dedicated supervision of Pakistan Football Federation (PFF) along with the football coach Zavisa has brought this victory to Pakistan.

According to PFF, Pakistan were made to work hard by the hosts who enjoyed the home conditions and the large supporting crowd, whilst Pakistan took their time to settle into the game.Pakistan defense line played a magnificent role by not allowing the Gorkhalis to score. Experienced Jaffar Khan gave no room to Nepalese strikers. Pakistan team showed its expertise in the game of football by exhibiting a formidable offensive and defensive line. This match was equally important for Nepal whose team stuck to the defensive formation. This victory is continuity of a chain of recent laurels being brought in by the youths of Pakistan establishing the facts that they are second to none in the field of sports.

President PFF, Makhdoom Syed Faisal Saleh Hayat showed ecstasy with the dedication of the Pakistani team and said that they have kept their words. He was pleased with the effort of PFF in coaching of the players and training being given to them by their coaches. Moreover, he added that such victory bring back the glory days of Pakistan football. This victory will boost the morale of not only the youth but also upcoming talent of the country.

General Secretary PFF, Lt. Col. ® Ahmed Yar Khan Lodhi TI (M) promised to put in his altruistic effort beyond the call of his duty to make PFF a shining star in the world of sports. In the end, he congratulated the football family of Pakistan and prayed for their well being and success in future.

After winning this friendly football matches against Nepal now Green Shirts will continue its journey for Maldives for two friendly matches to be played on 12th and 14th February, 2013 to continue its winning streak.