Home  »  FOOTBALL   »   The women’s role in the largest road building 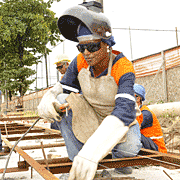 Brazil (FIFA News) June 18, 2012: Mangue, They are in charge of cleaning procedures, coffee making, security/safety measures and managerial tasks. They are also engineers and some work as welders, painters and carpenters

What only a few years ago was seen as unusual or incompatible with female tasks is becoming a growing trend. Women have now become an increasing presence in civil engineering works performing jobs which not long ago were considered exclusively male positions and changing the profile of work sites all over the country. This “new order” is especially true in the works of the Via Mangue, an extensive road system jointly managed by the Pernambuco state and Recife local government.

A visit to the sites will reveal that they are active in areas such as cleaning procedures, coffee making, managing and some work as engineers, welders, painters, carpenters and security agents. Maria Aparecida, working for 10 months now as a general supervisor for the Via Mangue works, controls all equipment used in the site and knows exactly where they are being used or those which have been damaged. “I feel privileged. It is quite difficult to find women working in the building industry, it is traditionally a male activity. And I just love the work”.

Cidra Sandra (right), from Bahia, working in the site for 8 months now, bravely faces any hard work. “I am a welder and I can do anything related to the job. I can weld rails, beams, lattice works and use the blowtorch.” She says that being a woman helps dealing with the workers. “The boys see me as a professional, they say that women are more cautious, more relaxed and that this is very important throughout the welding process”.

Anayse Silva (left) is part of the staff responsible for the painting and lettering service in the site. “I am the only woman doing this job and I consider it to be a challenge. Despite working in a basically male environment I feel very well, they respect my job, they admire me and they support me all the time”.

The president of the Building Industry Union, Gustavo de Miranda, thinks that the growing number of women working in building sites reflects the way the country’s economy has been developing. “According to data relating to the country’s GDP, the building and civil engineering was one of the sectors which most benefited from investment and grew accordingly, increasing the number of new professionals”. Miranda says that it is only natural that women, many of them heads of family, could do these jobs today. “We can say that the presence of women in the building industry is something never seen before and should be stimulated”.

Coordinating the Via Mangue building project is another woman, Débora Mendes, president of URB, the city’s urban development agency. She points out the women’s role in the work market: “Women have been increasingly finding their place in this market, doing jobs formerly exclusive to men, and proving they are capable of performing them. I am quite proud to be heading a project so important to our city.” She adds that, in her opinion, a woman in the presidency of the country is a further confirmation that “women are capable of doing this and much more”.

THE PROJECT – The Via Mangue will comprise traffic lanes for vehicles, pedestrian passages and bicycle tracks. It will be the first express road in the city with an average speed of 60km/h. The road will extend for 4,75km from central Recife to Boa Viagem and for 4,37km on the way back. It will not incorporate any traffic lights or crossings and there will be special accesses for handicapped and elderly.

The works have also provided decent homes for nearly 1000 families formerly living in palaffites along the projected road. The Via Mangue will also serve as a protection belt of the Pina river mangrove, improve the traffic in Boa Viagem and Pina and make possible the opening of an exclusive bus corridor in the Avenida Domingos Ferreira, in Boa Viagem. An area of 221 hectares will benefit from a sanitation network with elevatory stations and sewer emissaries.

As most of hotels are located in southern Recife, the Via Mangue will help tourism development, providing an easy access to the area. It is also to benefit those living or working in Jaboatão dos Guararapes, Cabo de Santo Agostinho and Suape.