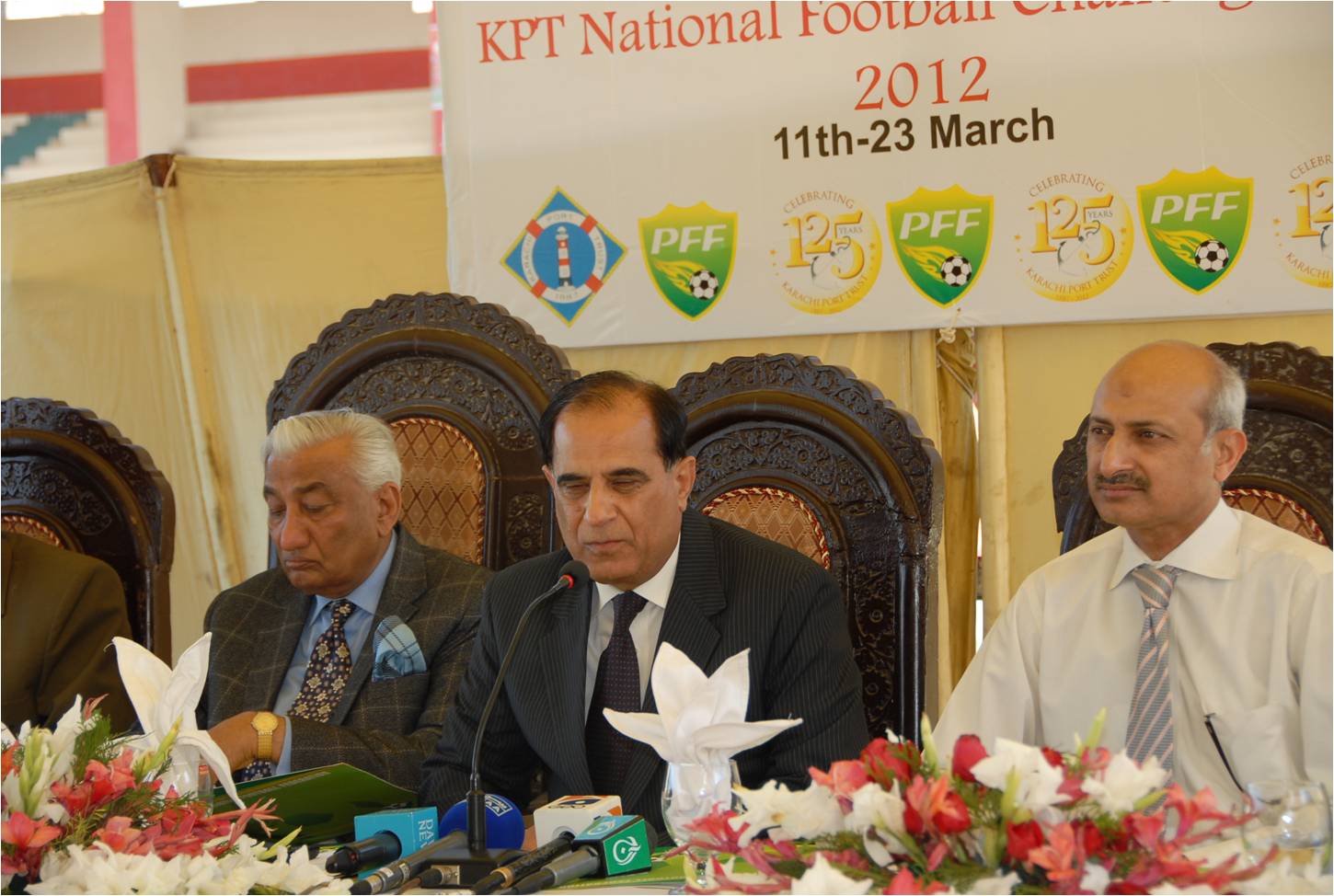 Karachi, Pakistan, March 10, 2012: It is a matter of pride for KPT to sponsor the mega football event in the country as part of their 125 years’ celebrations, said the General Secretary of Pakistan Football Federation (PFF) Lt. Col. (Retd) Ahmed Yar Khan Lodhi while chairing the press conference just after the announcement of draws for KPT National Football Challenge Cup 2012 at KPT ground at KPT Sports Complex Karachi.

According to the press release issued here by PFF, the press conference was given by the panel of officials from KPT and PFF side. From KPT side, Rear Admiral Azhar Hayat, General Manager Operations and Shah Naeem Zafar, Manager Sports were present. From the PFF side besides the General Secretary PFF, it was attended by Syed Khadim Ali Shah, President Sindh Football Association (SFA) and Wing Commander (Retd) Pervaiz Saeed Mir, Director Development and Competitions.

While speaking on the occasion, the General Secretary PFF said that this is the first time we have inducted two youth teams in an event like this and stressed on seeing great potential in the youth. He said that our future is in the hands of youth who with experience and exposure will become asset for the national team buildup. Under the vision outlaid by the President PFF Makhdoom Faisal Saleh Hayat in his vision 2020, we are strictly monitoring the results and we have great expectations from our youth. This gesture will encourage the players to put in their best efforts in the game and bring credit to the nation; he added. He also announced the prize money for KPT National Football Challenge Cup 2012 as follow.

While replying to the queries raised by various journalists during the press conference, Lt. Col. (Retd.) Ahmad Yar Khan Lodhi informed that FIFA has given a go-ahead signal to its Pakistan Chapter for the construction of the first Goal Project in Karachi. He further said that a similar project is also underway in Peshawar.

General Secretary PFF has further said that In order to keep the young footballers in good shape, PFF has taken the initiated for ‘Fast Track Training Programme’ under which outfits of different age-groups will undergo training at regular intervals throughout the year. “Our basic purpose behind this programme is to keep our best talent in form,” PFF secretary Col Ahmad Yar Khan Lodhi told during the press conference.