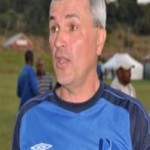 According to the press release here by PFF, the contract with Milosavljevic has been inked for the period of two years which is extend able by another two years by mutual consent depending on his performance at PFF. New appointed foreign coach belongs to Serbia.

Zavisa Milosavljevic throughout his career as football coach had the training of Serbian national U-16, U-19 and U-23 aspirants of football game. He was also the Head Coach of Lesotho Senior National Team (South Africa). Milosavljevic is an A category coach with a master degree in physical education and Professor of Physical Education.

While Col. Lodhi expressing his own views and that of Syed Faisal Saleh Hayat, President PFF said that the main objective of hiring this professional coach is to enhance and expedite the youth development through PFF which they hope will bring excellent results in times to come, giving boost to the ability of the young football players of Pakistan.