Home  »  FOOTBALL   »   Del Bosque and Renard give a press conference 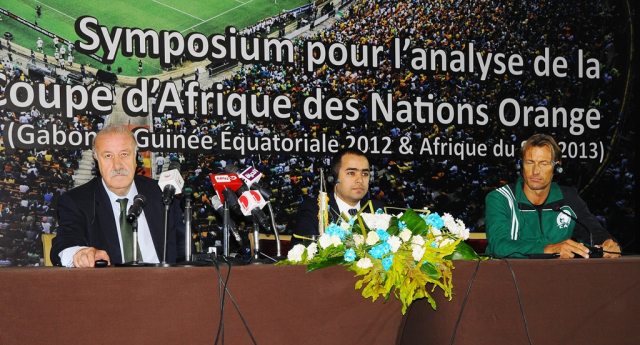 Cairo, May 13, 2013: FIFA coach of the year 2012 Vicente Del Bosque, coach of Spain winners of EURO 2012 and FIFA World Cup 2010 held a press conference at the conclusion of the CAF Symposium for the analysis of 2012 and 2013 Orange CAF Africa Cup of Nations in Cairo. The conference was also attended by Herve Renard, coach of Zambia Champions of 2012 AFCON.

Del Bosque praised the development of African football in the few recent years, and said Nigeria; AFCON 2013 Champions could reach the 2013 FIFA Confederations Cup semi final next month in Brazil. Nigeria is drawn in Group B besides Spain, Uruguay and Tahiti. The Spain coach said he cannot single a team to be the best in Africa, but he believes Nigeria deserves the title after managing to win the last edition of the Cup of Nations.

The symposium guest of honor said big African teams that missed the recent events, namely Egypt should work on younger players and prepare them to be brought into the senior team in order to get back to the continental theatre. Del Bosque refused to advice Egypt’s manager Bob Bradley, saying the later knows better about his team.

Del Bosque answered a question regarding his future after leaving Spanish national team mission, saying that he hasn’t decided yet whether he’ll renew his contract with Spain after the 2014 FIFA World Cup in Brazil or not. He confirmed that he will not coach any other team after finishing his career with Spain, saying that he won’t get the Real Madrid manager job back even if he was offered the post.

Del Bosque refused to evaluate Real Madrid’s coach Jose Mourinho, saying he is not the place to do that. He said Spanish teams did well in this year’s UEFA Champions League, despite being eliminated in the semi final. On the other hand Herve Renard said he was happy attending the symposium that benefited him a lot with his job. He expressed his pleasure with meeting Del Bosque as the best coach in the world currently. Renard also chose Nigeria as the best African national team now and Al Ahly as the best club in the continent as they are the current CAF Champions League holders. He said he’s committed to his contract with Zambia and will do his best with his team in the 2014 FIFA World Cup qualifications. —- CAF