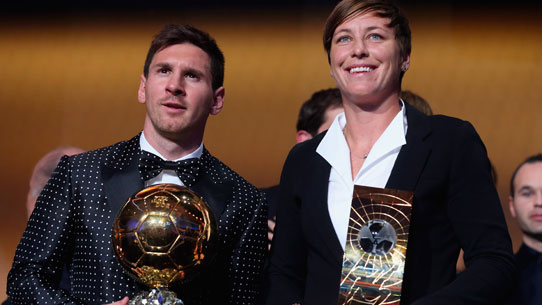 Zurich – Switzerland, Jan 08, 2013: Argentina’s Lionel Messi collected a record-breaking fourth consecutive title of best player in the world when he was awarded the FIFA Ballon d’Or, while US player Abby Wambach claimed her first FIFA Women’s World Player of the Year award at the FIFA Ballon d’Or Gala held at the Zurich Kongresshaus this evening.

In women’s football, 2012 was the US national team’s year. Sundhage and Wambach led the US to its fourth Olympic gold medal in London after defeating the Japanese team in the final and thus exacting revenge for the FIFA Women’s World Cup final the previous year, which Japan won for the first time in their history.

These awards were decided after a poll in which the captains and head coaches of the men’s (for the two men’s awards) and women’s (for the two women’s awards) national teams, as well as international media representatives selected by French football magazine France Football, voted for candidates in each of the four categories. Each group’s votes represented one third of the final result.

It was an unforgettable night, with many former and current football stars on stage and on the red carpet. The international audience was entertained with a flavour of Brazil as we look to the FIFA Confederations Cup 2013, as well as by Scottish singer Amy MacDonald.

The FIFA Ballon d’Or was awarded for the third time tonight following the amalgamation of the FIFA World Player of the Year award with the France Football Ballon d’Or in 2010.

Wambach, winner of the FIFA Women’s World Player of the Year award, led the USA team to the title at the London 2012 Olympics, where she also won the adidas Golden Ball as the best player of the competition and the adidas Golden Boot for her five goals. She collected 20.67% of the votes, ahead of Brazil’s Marta and Alex Morgan from the USA, who received 13.50% and 10.87% respectively.

Vicente del Bosque secured the FIFA World Coach of the Year for Men’s Football award with 34.51% of the votes, ahead of José Mourinho, the Portuguese coach of Real Madrid, with 20.49%, and former FC Barcelona coach Pep Guardiola, who received 12.91%.

Meanwhile, Pia Sundhage led the FIFA World Coach of the Year for Women’s Football category with 28.59% of the votes, ahead of Norio Sasaki (23.83%), coach of the Japanese national team that collected silver at the Olympics in London, and France team coach Bruno Bini (9.02%).

The FIFA Puskás Award for the ‘most beautiful goal’ of the year as voted for on FIFA.com, FIFA on YouTube and francefootball.fr by more than five million fans was also presented. This prize, created in 2009 in honour and in memory of Ferenc Puskás, the captain and star of the Hungarian national team during the 1950s, went to Slovakian striker Miroslav Stoch, who superbly hooked a shot into the top corner of the net on 3 March 2012 for his club Fenerbahçe in a Turkish Süper Lig match against Gençlerbirliği.

Franz Beckenbauer received the FIFA Presidential Award from President Joseph S. Blatter in recognition of his extraordinary achievements and record of service to the world’s favourite game. Beckenbauer excelled as a supremely elegant, world-class player, as a charismatic coach and manager on the touchline, and as the figurehead and chief organiser of a major sports event. And each and every time, the focus was the FIFA World Cup.

The FIFA Fair Play Award was given to the Uzbekistan Football Federation (UFF) for showing that fair play and competition are not mutually exclusive but complement each another. The UFF finished as winners of the 2012 AFC Fair Play Association of the Year award. The Uzbeks amassed 498.84 points over the year, 16.37 points more than runners-up Iran, as they emerged the victors. —- FIFA / Photo by Alexander Hassenstein – FIFA/FIFA via Getty Images