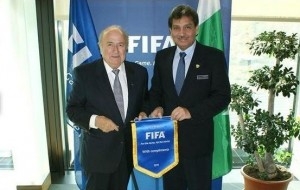 Lahore-Pakistan, March 27, 2012: Makhdoom Syed Faisal Saleh Hayat, President Pakistan Football Federation (PFF) who has been recently inducted as member Strategic Committee of Federation International de Football Association (FIFA) in addition to his continuation as member of Players Status Committee had gone to Zurich on an invitation to attend FIFA Strategic Committee meeting. During his stay at the Home of FIFA, he had an exclusive meeting with Mr. Jospeh S. Blatter, President FIFA on Monday, 26 March, 2012. Mr. Hayat expressed his gratitude to Mr. Blatter for his personal effort to expedite the process for the construction of five sanctioned FIFA Goal Projects for the flood affected people of Pakistan which has alleviated their sufferings and brought back cheers on their faces.

According to the press release issued here by PFF, Mr. Jospeh S. Blatter, President FIFA reiterated his commitment to expedite the process for construction on five FIFA Goal Projects already allocated to Pakistan to ameliorate the suffering of the peoples of flood affected areas of Pakistan. He also conveyed his willingness to arrange a few artificial turfs for these projects to bring them at par with modern football fields which shall greatly enhance the playing techniques of our football players. Mr. Blatter further appreciated PFF Youth Development Program which would soon turn Pakistani team as one of the best Asian team.

Earlier Makhdoom Syed Faisal Saleh Hayat, President PFF attended the meeting of FIFA Strategic Committee which deals with global strategies for football and its political, economic and social status under the chairmanship of Mr. Jospeh S. Blatter, President FIFA. During the meeting main topics discussed were matter directly affecting the game, such as the composition of the International Football Association Board (IFAB), the protection of the game including the international match calendar, insurance of players and third-party ownership, as well as the need to find the right balance between the interests of clubs and national.

It is pertinent to mention here that the report of the Strategic Committee will be presented to the FIFA Executive Committee, during its meeting being held on Thursday and Friday at the Home of FIFA in Zurich.