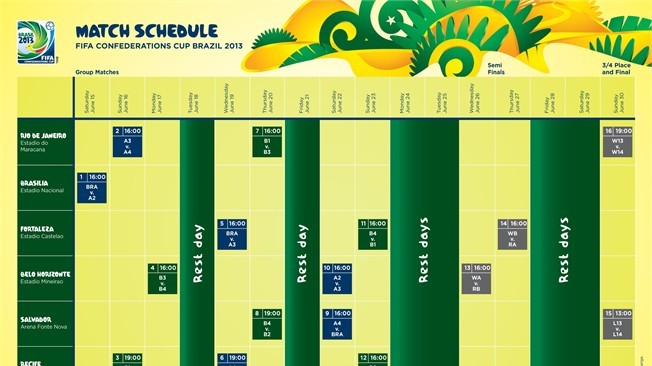 Zurich-Switzerland, June 01, 2012: With little more than a year to the kick-off of the “Festival of Champions” in Brasilia on 15 June 2013, the match schedule covering the six confirmed FIFA Confederations Cup venues was presented in Rio de Janeiro today (30 May 2012). All host cities other than the capital Brasilia – which will host the prestigious opening match – will stage three of the 16 games. To view the entire match schedule, please click on the Match Schedule PDF on the right hand side.

“This event is more than just a curtain-raiser for what is to come in 2014. Yes, it is an important operational test for the country and host cities, but at the same time it showcases football at the highest level. This has also been reflected by recent research, which shows that with 64 compared to 66 per cent, nearly as many Brazilians want to be in the stadium during the event in 2013 as for the FIFA World Cup one year later. And that is not to mention the incredible awareness for the event of 87% among Brazilians, which is higher than for the Olympics and the Copa América,” said FIFA Secretary General Jérôme Valcke, who was joined at the media briefing by Sports Minister Aldo Rebelo and LOC management board members Bebeto and Ronaldo.

“We are committed to delivering the greatest FIFA Confederations Cup ever. It is a big challenge for the six host cities, who have worked so hard to come to this point. But their effort will surely pay off with memorable matches, great celebrations and the huge international awareness that the tournament will raise for these cities,” said Ronaldo, accompanied by his LOC colleague Bebeto. “This line-up of top-level teams will display their talent in six new or fully refurbished stadiums. After the competition, we will have half of the venues ready and tested for the FIFA World Cup. One year ahead. This is very important for our team at the LOC,” he added.

“The six host cities that will host the FIFA Confederations Cup will not only be the gateways to a great spectacle of football, but will also show Brazil’s greatness as well as the country’s and the people’s capacity to deliver. I am very confident that we will have an event that will be up to standard, as Brazilians and the whole world expect,” said Sports Minister Rebelo.

Today also saw FIFA make two major commercial announcements. Firstly, Wise Up, a leading English language school for adults which is present in over 70 cities in Brazil and all over the world, became the fourth National Supporter of the 2014 FIFA World Cup™.

Through the sponsorship agreement, Wise Up will receive extensive marketing rights in Brazil for the FIFA Confederations Cup 2013 and the flagship 2014 FIFA World Cup™.

“Never before has a company from the educational sector supported the greatest event in the world, and never before have the eyes of the world looked to our country like now. We acknowledge both of these responsibilities with Wise Up’s support for the 2014 FIFA World Cup: we want to show that education is deeply necessary to develop a country, and that Brazil can be an example of tolerance and hospitality to all the people who will come here to celebrate their passion for football,” said Flávio Augusto da Silva, President-Director of Wise Up, the official language school of the 2014 FIFA World Cup™.

The Wise Up deal is not the only major announcement from FIFA’s Marketing Division, with separate news revealing that Globo Marcas has been appointed as FIFA’s master licensee for both events, with the agreement running up to the end of 2014. With extensive experience in the licensing business, Globo Marcas has launched more than 3,500 products from 150 different brands since the company was founded in 2000.

José Luiz Bartolo, Director of Licensing at Globo Marcas, said: “Globo Marcas is very proud to be the chosen partner of FIFA in this once-in-a-lifetime event for Brazil. With our experience and knowledge of the Brazilian market, together with the quality integration with FIFA and TV Globo, we are sure to score many goals together in this important initiative.”

“We’re delighted to be able to announce two very important agreements,” said Thierry Weil, FIFA Marketing Director. “Wise Up’s dedication towards improving the foreign language skills of Brazilians is commendable, and is aligned with FIFA’s vision to touch the world and leave behind an education legacy for the host country. We’re also convinced that by working together with a company as strong as Globo Marcas in the licensing field, we will be able to provide fans with access to a top-quality range of merchandise which will add to their experience of the event.”