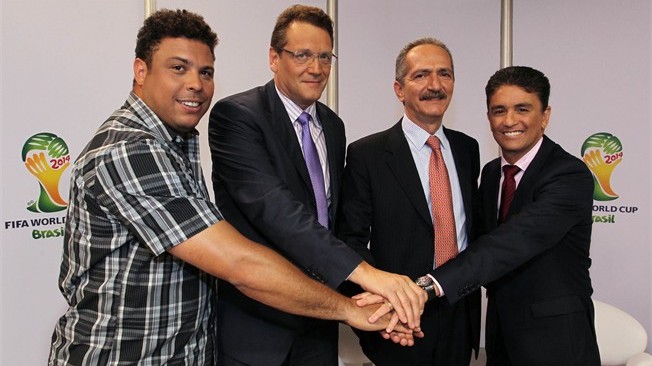 Zurich-Switzerland (FIFA), June 01, 2012: Brazil 2014 slogan, A major milestone in the path to the 2014 FIFA World Cup Brazil™ has been reached (29 May 2012) as FIFA, the Local Organising Committee and the Brazilian government presented ‘All in one rhythm’ / ‘Juntos num só ritmo’ as the Official Slogan. Fans can now watch the Official Slogan video, which has been produced by TV Globo, on FIFA.com and http://www.youtube.com/fifatv.

Developed by Brazilian communications agency Aktuell, the Official Slogan is much more than a tagline. It represents the underlying mindset running through all aspects of the tournament organisation. It will influence the development of themes for events such as the FIFA Fan Fest and the opening and closing ceremonies, briefings of event staff and volunteers, and FIFA, LOC, Host City, state and Federal Government campaigns.

“The Official Slogan is the result of a joint effort between Brazil and the world of football to find a unifying message which represents the unique flavour that Brazil will bring to the FIFA World Cup. Based around the central idea of ‘rhythm’, it will unite fans in Brazil and abroad, around what will be a colourful and vibrant celebration set to a uniquely Brazilian rhythm,” commented FIFA Secretary General Jérôme Valcke at the presentation.

Similar to the 2006 edition of the event, the meaning differs slightly from the local to the international version, with both still representing the same idea. In Brazilian Portuguese, the word ‘Juntos’ encapsulates an appeal to all Brazilians to act as hosts and ambassadors of their country in the build-up to and during the event itself. The Official Slogan represents the essence of five pillars representing Brazil: cohesive society, power of innovation, striking nature, living football and land of happiness.

A total of 26 slogans – including both local and international versions – were proposed by six shortlisted Brazilian-based agencies. It was not only important that the slogan was consistent with the values and positioning of the 2014 FIFA World Cup and the host country, but that it also conveyed a message to all Brazilians, amongst other criteria.

“Football means everything to Brazilians. That is why it has such potential to bring people together and be a force for good. The rhythm of football is everywhere in Brazil, uniting people both young and old and from all sections of our society,” said Ronaldo, with his fellow LOC management board member Bebeto adding: “It showcases our creativity, our open-mindedness, our positive approach to life and our friendliness. Therefore, we are all focused on ensuring that the power of this event is used positively and has a lasting impact on our country.” Image: LOC