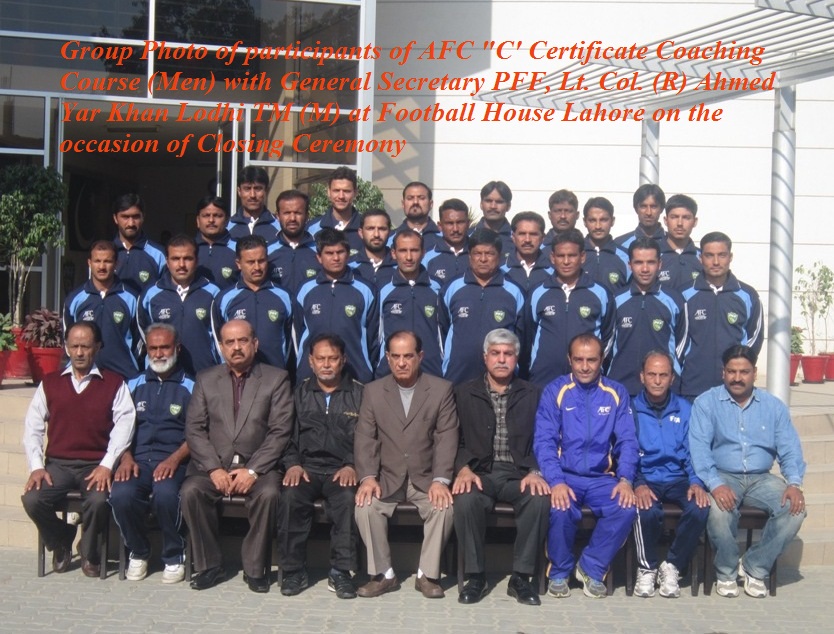 Lahore – Pakistan, Dec 17: PFF Vision 2020 Plan, which the Pakistan Football Federation (PFF) has unveiled on 21 June 2008 PFF Congress, will take Pakistan to new height. This ambitious plan will create pavement to PFF in earning berth in top 15 Asian teams as well earning tickets of World Cup, Olympics and FIFA age-limit competitions in coming decade. But all the coaches were to work harder along with coming coaches to make it a reality.” This is stated by General Secretary PFF, Lt. Col. ® Ahmed Yar Kan Lodhi TI (M) as chief guest during closing ceremony of AFC C-Certificate Football Coaching Course at Football House Lahore on Monday.

According to the PFF, President PFF’s President Makhdoom Syed Faisal Saleh Hayat in his message has urged the coaches to acquire technical know-how and work harder for the promotion of football in the country. Makhdoom added that there should be a free and frank discussion so that the coaches would be able to share each other’s ideas. He emphasized that the coaches should be impartial and implements their knowledge practically on the ground. It is not feasible to make progress without coaching. Therefore, the coaches must have the ability to watch and scrutinize the strong and weak points of the players while selecting national/regional teams. “I hope this course will improve the skill of the coaches,” he added.

“For 15 days, twenty-three aspiring coaches from various parts of Pakistan, who had taken the ‘D’ License earlier, went through the rigorous theory and practical session to earn the ‘C’ License, which would defiantly enhance their knowledge, in their search to climb further in the coaching field. The participants I am sure must have realized that this ‘License’ neither come easy nor to everyone but only to those who are ready to work at the grassroot level. Considering that coaches are the pillars on which a football development program rests, he advised the coaches to work voluntarily with the youth in their areas as to raise their standard and provide skilled players for the national team added Mr. Lodhi.

The AFC ‘C’ Certificate Coaching course aims at training coaches and developing their basic techniques and skills in football at grassroot level. It is designed to teach the coaches to organise, direct and conduct basic coaching practices targeting especially young players. The course lasts 15 days and requires a minimum of 85 hours of study time for both the practical and theoretical sessions. In the final examination, students are assessed on their practical coaching abilities, knowledge of the laws of the game, in addition to learning and understanding of the theory contents of football.